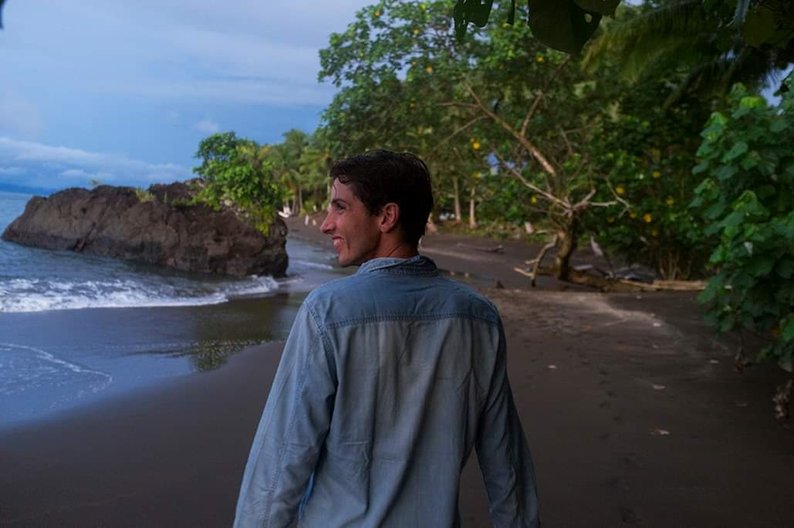 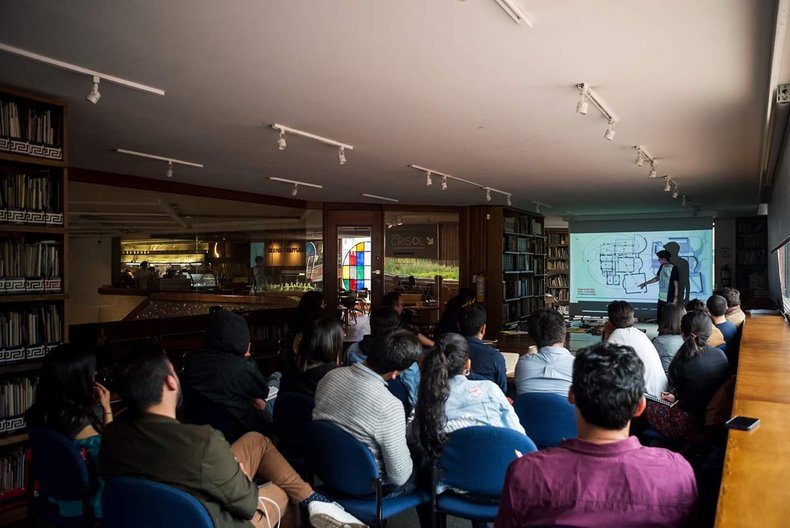 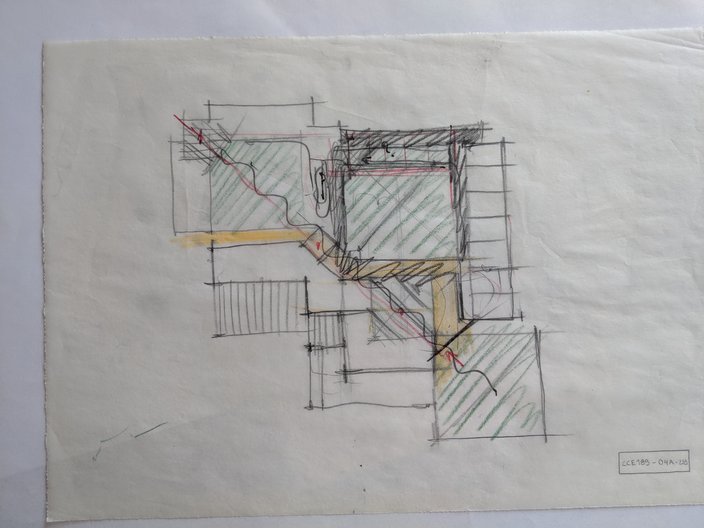 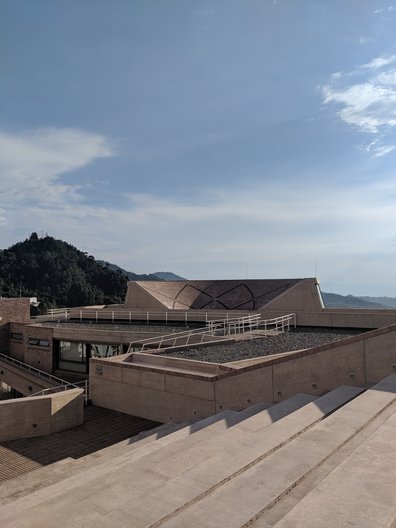 Our final Salmona Fellow, Gregorio Maya, has returned from Colombia and reflects on what he learned while on his residency.

Click here to watch Gregorio on his Fellowship and to see Gregorio delivering one of his workshops while in Colombia, click here.

Previously, in my first travelogue, I mentioned what it was like to rediscover Salmona’s work after many years of being away and out of touch with his context. Certainly, an experience that was worth reviving! I also discussed the degrees in which on-site research like this one reshapes the original expectations that one has before travelling. In the end, it was more about the experience in Colombia than the pseudo defined outcomes that I had in mind when proposing research based on an evidence-based approach. I had to change my personal disposition to be able to accept a less tangible outcome that was mostly driven by local conditions of time, culture and place. It was a time to concentrate on the opportunities that could arise from all the great talks, workshops, walks, exhibitions and meetings there.

This is precisely what I want to focus on here. After some time to settle back in the UK, I have come to realise how important the opportunity of that trip was personally, and which pivotal points will become the greatest outcomes of the fellowship.

It was clear from very early on that my approach trying to structure the research under conventional scientific states of hypothesis setting, data collection, analysis, interpretation and further communication was a challenge on its own. On one hand, because that is not the common approach in Architecture, and on the other because outside of that rigid structure there were eventualities that it was worth profiting. All in all, I had six weeks to approach the works of a well studied Architect (at least in the Latin American context) and with all things considered it was unlikely to depict something new that had not already been discovered before.

However, one thing resonated loudly. When I started talking about a social understanding from spatial considerations (i.e. the roots of the space syntax theories), people were quickly attracted to it and wanted to know more. I then focused my efforts preparing workshops that would speak about this and with the help of Salmona’s case studies tried to illustrate how a network approach to spatial configuration can be the path to explaining certain social behaviours. I have always known how much I like leading workshops, but this time, in particular, I felt like the response was incredibly genuine, which encouraged me to do as many workshops as I could. Some were much more technical; trying to upskill students to use digital tools (such as Isovists (include link) — open software that I constantly collaborate with its developer) to extract a basic visual understanding of the complexity of buildings. Some others were held in some of Salmona’s buildings, and so the direct experience gave an extra layer of depth to the discussions. It seemed like there was never enough time to discuss all the topics —at least that is how I felt it; I could have gone on and on! Fortunately, the audience was always as diverse as possible which was certainly ‘keeping me on my toes’. Quite often I found myself surrounded by professors, students, artists (including carpenters), urban developers and people from the general public who were keen to participate.

As mentioned, two of the workshops took place in Salmona’s buildings (one in the MAMBO in Bogota and another in the recently opened Cultural Centre of the Caldas University in Manizales - both partner institutions of this program). While it was great to have direct access to the spaces and be able to exemplify the analysis to concrete adjacent spaces, it was also slightly problematic given the nature of the buildings. During the workshops the intention was to first clarify how to measure some of the intangible relationships of the space, using network techniques. Secondly, to understand some of the most frequent assumptions derived from the measures. Finally, to demonstrate how Salmona’s buildings were, in fact, cases worth studying due to his notable effort to constantly dissolve the idea of the spatial boundaries. His compositions of space make him an extraordinary example of postmodern Architecture but certainly not the norm for understanding new techniques for spatial analysis. The positive side of this was that, through this struggle, I developed a way to incorporate a new combination of measures in my everyday job!

One of the most enjoyable moments of the trip was spending time on the Pacific coast. While watching wales, waterfalls and listening to the rain does not directly relate to Salmona or any of his buildings, I had a revelation there which is worth mentioning. In spite of being a place with several deficiencies, such as a lack of basic infrastructure and general oblivion, this remote part of Colombia clearly has a very developed sense of community. The human ties that bring people together are by far stronger (or at least more evident) than any of the ones in the urban contexts I was studying. It seemed like the lack of spatial connectivity was somehow replaced by reliability on each other. Consider this magical place like a disperse group of micro-settlements along kilometres of beach interrupted by dense forest and/or uncrossable rocks or rivers. It was hard not to think that the utopian idea of the ultra-connected cities was the idea of the connected communities which was, in fact, happening in this very rural place. This paradox is clearly nothing new but it did make me think about how malleable and interchangeable could be the nature of human connections.

I have no proof whether Salmona ever thought about this in the same way, but personally I see a good argument that he may have had, from the experiences one has while wandering around his buildings and perceiving a subtraction from the immediate ultra-connected metropolis. It could well be read as a reconnection to the landscape and one's self as a first step to creating social bonds.

Salmona’s buildings were certainly created with an idea of the individual first: strongly curated views, a diversity of paths and a rich sensorial accent all along the way. But, the idea of creating a collective community through combining paths to increase spatial co-presence seemed foreign in his Architecture (which very often could be described as mazes). Instead, the issue of community building was more likely approached by his political agenda; assuring that most of his buildings were not only designed for a handful of privileged ones, but rather open to the exploration of all.

In summary, I have to say that even though six weeks in Colombia seemed like a relatively short amount of time there, I had plenty of discoveries that I will always be grateful for. I learnt from Salmona, from his collaborators and from the people that have been studying him for many years. But I also took away lessons that have started to shape my priorities in my professional life, such as wanting to do more workshops, collaborations, more experiments and more open-minded research. The residency triggered a desire to explore even deeper how - as architects - we can design space in such a way to prompt community-building behaviours. So, if any of the above resonates with you, please raise your hand (or send me a tweet) and let’s start a conversation!

Find out more about the Rogelio Salmona Fellowship here.