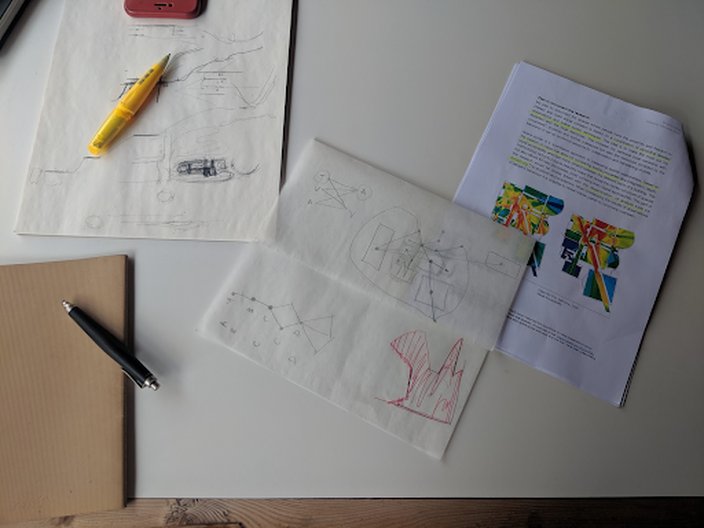 Discussion with Maria Elvira Madriñan understanding some of the measures of Space Syntax.

Our Rogelio Salmona Fellow of 2019, Gregorio Maya, shares with us a first travelogue detailing his rediscovery and relearning of the work of Salmona in Colombia.

It has been just over three weeks since I arrived in Colombia. Definitely, three very busy weeks filled with meetings, site visits, trips, workshops and mostly understanding the ways of working during the residency here. I've now realised that the freedom here is supported by all the parties involved. Whatever ideas I've had whilst here (eg. changes of itineraries or focusing on workshops rather than revisiting buildings I already knew) have been backed up by the British Council, Más Arte Más Más Acción and the Fundación Rogelio Salmona. I'll try to summarize briefly some of the highlights that this supported freedom has allowed me and the thought processes affecting my research time here.

I'll try not to tell a chronological story, but rather to aggregate events under two main topics: rediscovering Salmona and reshaping research questions. Both topics share the idea of repetition, mostly because of the nature of an in situ research residency, where the local context along with its logics reframe the dynamics of what was originally proposed while in London.

As I mentioned before, this is not my first contact with Salmoma's works. In fact, his buildings were a profound inspiration during my early studies. So, one of my main personal challenges of this fellowship was to rediscover the extent to which Salmoma's buildings symbolise the idea of the all round near perfect project. That was easily a utopian idea that as a young inexperienced architect I created whilst visiting his very sensorial and captivating buildings. Yet, now that I've narrowed my interests and focused on the importance of layouts, I've come back to rediscover that Salmoma was indeed a very skilled designer (his early drawings in the archive already suggest complex compositions with strong spatial strategies in mind) but clearly his worries about public realm were, for example, not precisely focused on a spatial appropriation and subsequent modification but rather on a broad concern about the public realm, the landscape and the personal experience through space.

The former brings me to explain partly why I’ve had to reformulate the research questions that originally I had setup in my proposal. Although, part of my residency here was always around the applicability of Space Syntax theories and methods on the works of Salmona, the ultimate question was about the extent to which his buildings promoted interaction in a way that they positively impacted the public realm. This seemed to be a key element given how current the discussions around reconciliation where since the peace deal of 2016. Yet, two particular issues reshaped my goals whilst being here. On the one hand, a couple of days after my landing a major announcement by some armed militants meant that I couldn’t really be thinking of a post-conflict era anymore. My ideals of encountering a society in the process of healing social breaks was not particularly accurate. I found a collective sense of resentment and low optimism when thinking about peace and reconciliation. Personally, it was sad and frustrating but it gave me important insights into understanding that in order to create environments to come together and reconcile both top down and bottom up actions need to be aligned. So far I was focused mostly on the bottom up approach that Architecture can shape while we inhabit spaces on a daily basis. A part of me still wants to believe that the ability to create healthy social habits is one of the most important, powerful and pedagogical added values of good architecture (and hence of a great amount of Salmona’s buildings).

On the other hand, I had envisaged a set of individual cases where I was supposed to analyse the interaction on a project by project basis. But early into my interviews with local experts I realised that in order to analyse what I considered the spaces of reconciliation to their full extent, I had to understand many more aspects beyond the actual built space. The full cycle of the building - from its initial ideas of investing into a building to the way their execution happened - seemed to be great carriers of spatial narrative that considerably impact the usability of the projects. Certainly this is already a lesson learned for me for this and for future projects. None of Salmona’s buildings was purposefully design under post conflict context. Yet, his broader ideals of a community grounded into its territory and his characteristic fuzzy boundaries are signs of broader concerns under which peaceful cohabitation could certainly be understood.

As for now, I can certainly conclude that whatever exploration happens during my time here (whether focused on Salmona or not) would be fully driven and shaped by the events that happen here. In the end that’s the power of residencies (right?). In that sense, I’ll probably limit my findings more to personal learning than to scaleable elements applicable elsewhere. However, by constantly re-evaluating the lessons learned and personally continuing with socio-spatial concerns I hope to enrich not just the understanding of the capabilities of Salmona’s spaces but also nurrish my own future projects with social ethics and strong spatial strategies.