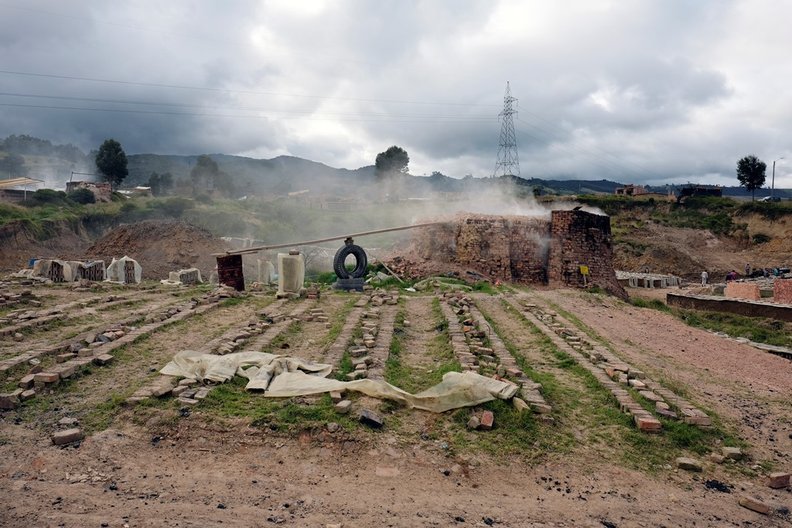 The Burning Chircales of Nemocon Strewn about the Beautiful Rural Landscape 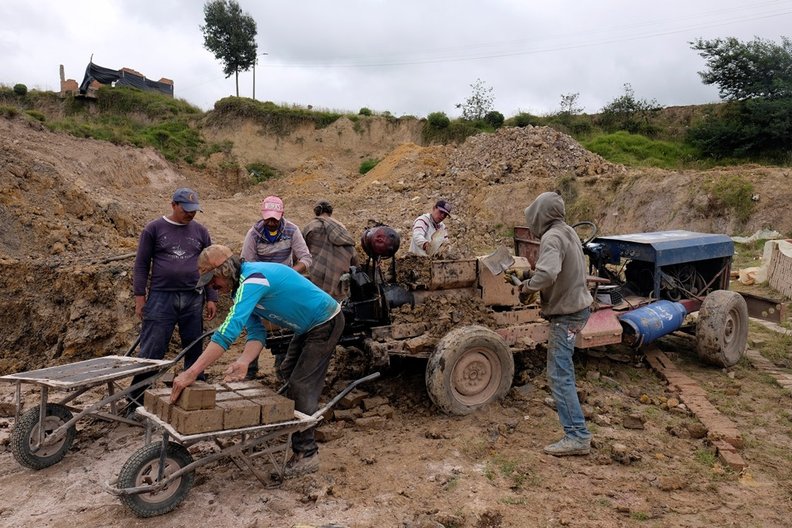 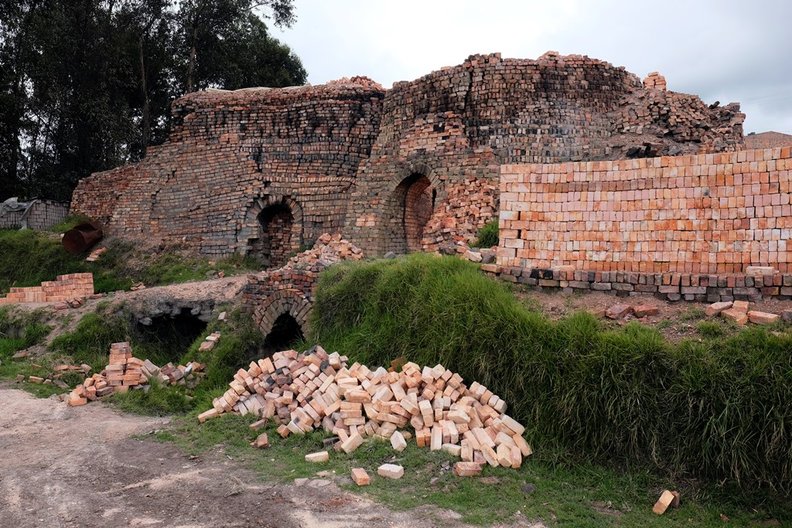 The Crumbling Furnaces, like Ancient Ruins Slowly Sinking into the Rustic Landscape 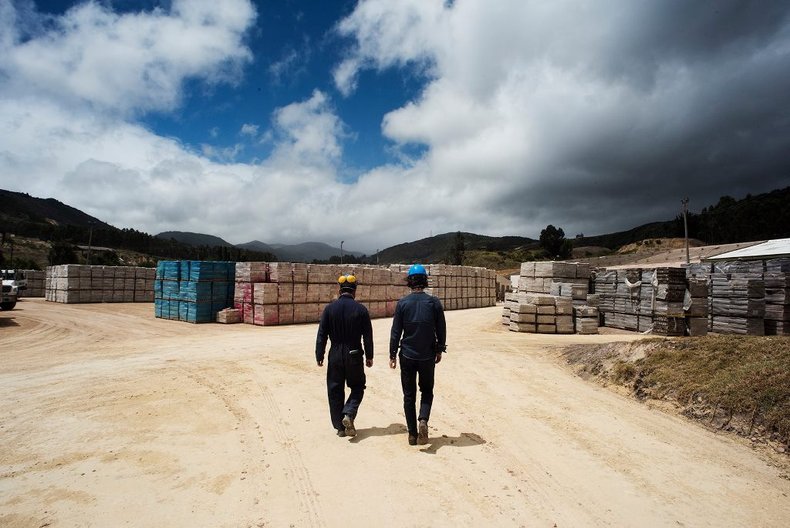 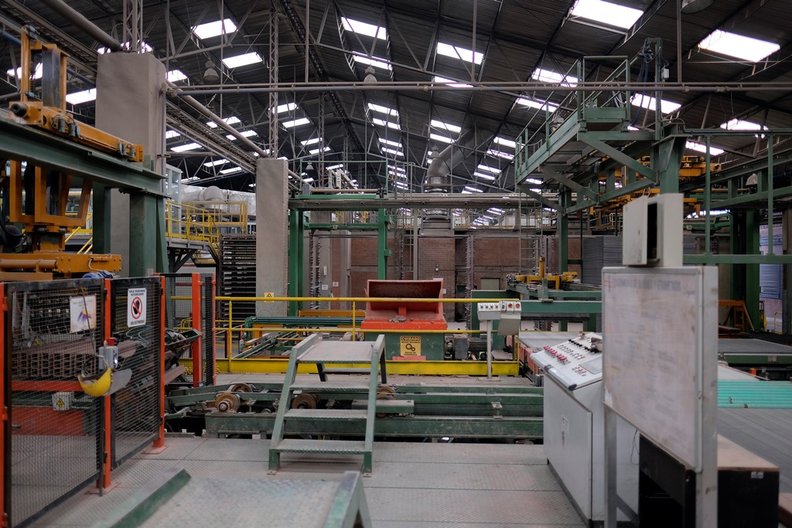 The Large Gleaming Warehouse, Complete with Italian Designed Infrastructure & Machines from all over Europe 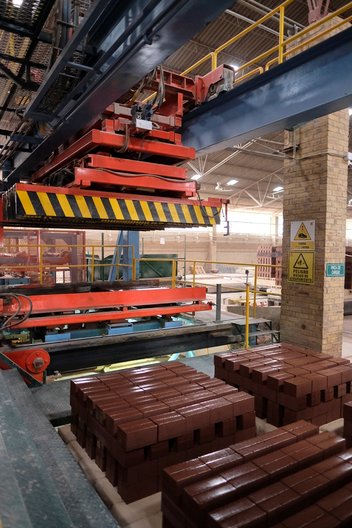 The Busy Movements and Sounds of Each Coloured Robotic Arm, Rubber Belt and Overhead Track are Mesmerising

I’ve recently had the opportunity to visit a mix of brick makers in the region, from the artisanal ‘Chircales’ in the rolling green hills Northeast of Bogotá, to the high-tech mega-factories of the ‘Ladrillera’ on the dusty Southern periphery of the city. With vastly different degrees of labour, mechanisation, dust and noise (not to mention profit), it is quite incredible that these parallel economies for the same product still exist.

In Nemocon I have seen hundreds of Chircales strewn about the beautiful rural landscape. Modest plots owned by individuals contain everything that is needed to make the bricks – the clay, space for drying, and the kilns. Locals are passionate about the process and proud of their craft, but production is slow, laborious, and yields very little reward beyond a simple subsistence. Brickmaking here is a way of life, but perhaps more out of necessity than desire.

Clay is gathered from the hillside and shovelled directly into the back of a modified tractor, compressed and extruded through a crude motorised turbine that has actually only relatively recently, within the last ten years, replaced the work of donkeys. The machines local inventor, known only as Julio, saw little to no profit from his creation as other entrepreneurs quickly capitalised on the new technology, and he has since passed away. As they often say here, ‘Las cosas no son de quien las inventó’ – The things do not belong to the person who invented them. Chircales owners tend to rent variants of this modest machine from wealthier locals as of when it is needed. The clay is extruded, bricks are cut by hand with tensioned wires and stacked on wheeled carts, then to be arranged in long waist-height rows to dry for two to four weeks before firing. It is a hard day of relentless, fast work for at least six men, but in just nine hours they can hit their production target of 20,000 bricks. It is perhaps a shame for so much of all the hard work to be done manually and for the clay not to be pressed into moulds and the bricks thrown by hand, yet Julio single-handedly quadrupled output with his invention, a figure that has been hard for any struggling Chircales to ignore. Ironically, I have heard that wealthier clients are now seeking the hand-made, and perhaps a return to these traditional, slower methods of production could be more profitable.

The firing process is similarly arduous, as 60,000 bricks are stacked by hand in open-top stone kilns, clad in brick on either face. Coal is placed between all brick courses and the fires are lit from the base for an epic month-long burn. These crumbling furnaces have a beauty of their own, like ancient ruins sinking into the rustic landscape. As kilns are coaxed into production the soft haze of dust and smoke makes for an evocative atmosphere, but this constant pollution cannot be good for the health of workers or locals. Weeks later a beautiful selection of mottled bricks emerge from the kilns, each ones colour, texture and consistency revealing of the type of clay and intensity of the burn. The Colombian government is slowly tightening its grip on environmental legislation for the Chircales, yet locals are wary of the costly upgrades required to comply, including furnaces that need to be closed at the top. Such a change is likely to necessitate the employment of engineers to calculate the kind of pressures that will build up inside the kilns – a new cost that is not easy to account for. For now, production continues undeterred. The cost of a brick is 200 pesos, or approximately five pence at the time of writing.

Whereas the process from hill to brick takes an average one and a half to two months for the Chircales, these factories can produce a brick in just 24 hours. Furthermore, they have the machinery to re-process any wastage in broken bricks or distorted clay. By comparison, pools of broken bricks lay by the roadside in Nemocon, sometimes usefully filling potholes, but more often than not redundant, slowly being consumed back into the very earth they came from. As I toured a large Ladrillera in Southern Bogotá, I was told that approximately 120,000 bricks can be produced a day. The gleaming warehouse spread so far I could not see the end, complete with Italian designed infrastructure and machines from all over Europe. The busy movements and sounds of each coloured robotic arm, rubber belt and overhead track are mesmerising. Several rows of kilns span the entire length of the building and can fire thousands of bricks in one relatively short, intensive 1000+°C burn. For such a lot of machinery there seemed to be very few workers, and in fact the majority of them were ushering my visit. The output is perfectly consistent, each brick an immaculate replica of the next, but crucially with quantifiable performance characteristics. The cost of a brick is 1000 pesos, or approximately twenty five pence at the time of writing.