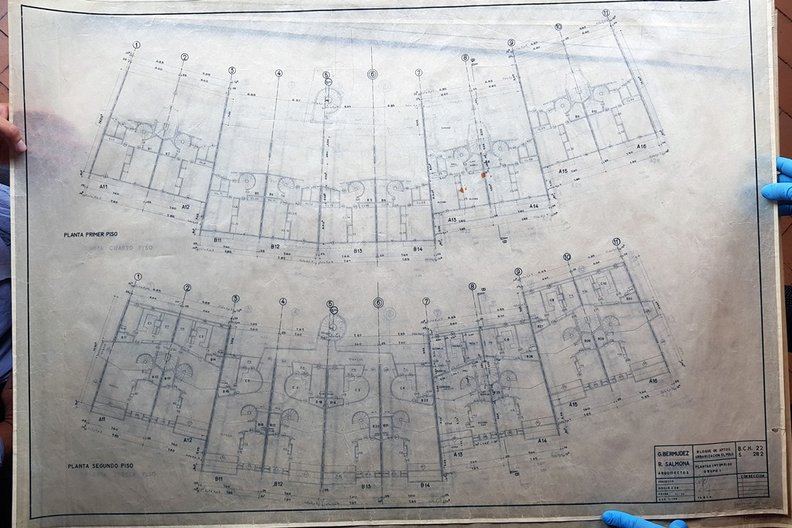 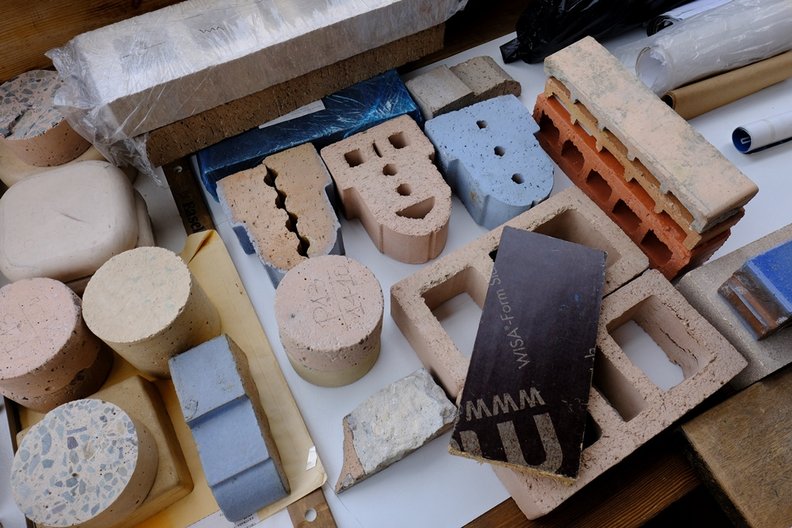 Digging Through Bricks & Other Material Samples in Rogeli Salmona's Office 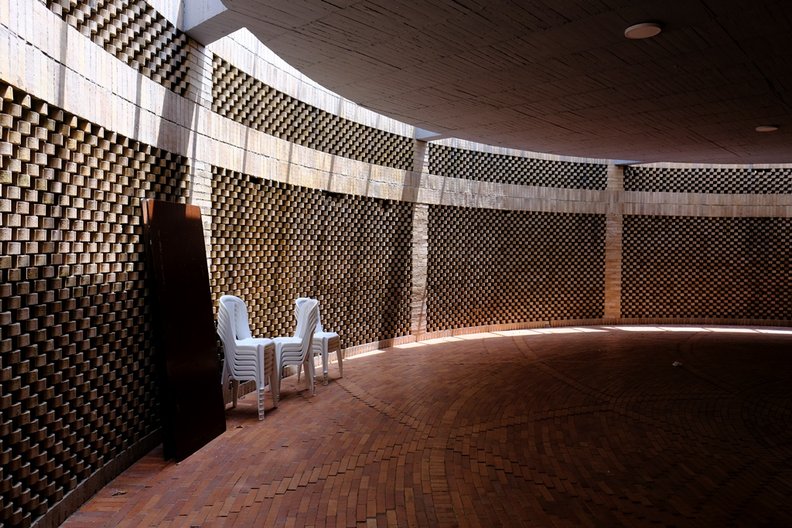 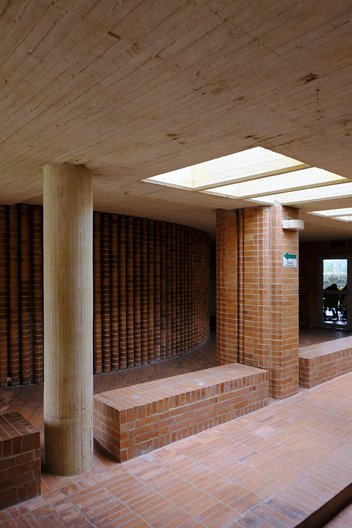 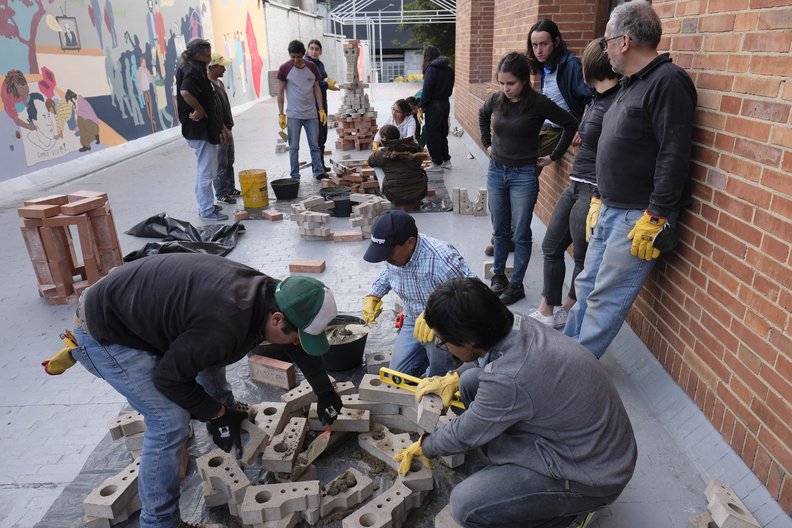 Brick Lab at the Museum of Modern Art 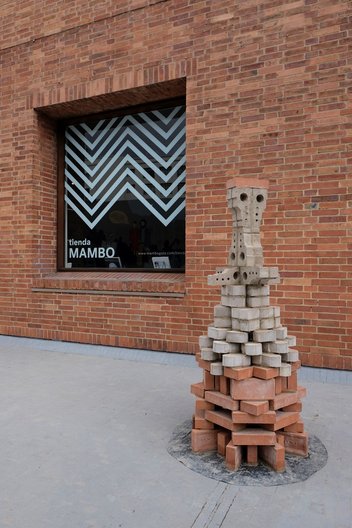 In his second blog post from Colombia, Rogelio Salmona Fellow, Dominic Oliver Dudley explores the use of brick in Rogelio Salmona architecture and shares his experiences from the building brick totems workshop.

Lately I have been mining the incredible archive at the Fundación Rogelio Salmona, searching for drawings, details, texts and leads – anything that might propel me further into Salmona's world of brick. I have learned that it was only after the completion of a modest residential block in Bogotá in 1963, 'El Polo' in collaboration with fellow Colombian architect Guillermo Bermúdez, that Salmona embraced the use of brick in his home country and began to establish his own alternative modern approach. He seized architectural ownership of the use of brick in the capital after years of colonial reproduction, engendering the material with a unique craftmanship and elevating its reputation beyond a cheap replacement to stone. Almost every project after 'El Polo' became an experimental essay in brick, pushing geometries, junctions and details to artistic and functional limits.

Interestingly, Salmona never employed brick as a structural solution, and even in his modest one or two storey projects, it is only ever utilised as a self-supporting skin, tied back to substantial concrete frames and so to some extent liberated from the constraints of the engineer. As his approach evolved and buildings became increasingly well refined, the brick skins that cloaked them became increasingly elaborate and embroidered like the Islamic architecture that inspired him. Salmona developed a selection of special brick types to achieve these sculpted masonry tapestries, and I have been amazed to learn that despite such intricacy he only ever employed the use of four brick types – the 'Estándar' (standard), 'Jamba' (jamb), 'Alfajía' (sill) & 'Delgado' (thin). He found ways to use these bricks in creative ways, enriching the architecture whilst retaining the economy of construction.

Ahead of arriving in Colombia I had hoped to meet some of the key craftsmen, the Maestro de Obra, that worked with Salmona on his projects. Sadly some have been untraceable and others passed away, but I have been very lucky to meet one brick layer by the name of Alfonso Lopez, who worked with Salmona on a school, private houses and a public avenue through the centre of the city. Alfonso is a man of small though hardened stature with a shy temperament, and it has not been so easy to ask him to reflect. In time our conversations have become more generous, and I have learned that the most challenging part of the process for brick layers was the making of the 'Formes' - the setting-out of the first four courses of brickwork without mortar. At this pivotal point Salmona was always present, and if the geometry wasn't perfect the process was repeated again and again until his satisfaction - reputedly not so easy to achieve.

In his later years Salmona toured the construction site with a folding cane come perch, which he would park next to the 'Formes' to observe. If this apparatus were quickly transformed back to cane mode and he were jabbing at the bricks with it, this was the not so subtle code for the Maestro de Obras to revisit the geometries of their creation. Salmona spent a great deal of time on the construction site, and would only ever take on projects that he had the time to oversee, often turning down or delaying work if it didn't fit with his workload at the time. Though a dialogue with the craftsmen was of great importance to Salmona, it has been interesting to establish that he was not necessarily the most verbal or communicative on-site. Much would remain in his own mind, and it was only really through this hard process of trial and error that designs were translated to the Maestro de Obras, and the architecture slowly demystified.

I have recently had the opportunity to conduct a brick workshop at the Museum of Modern Art here in Bogotá, and can attest to the difficulties of the 'Formes', even without Salmona present! Using the very same standard and special bricks that he employed and inspired by his architecture, teams of students (myself very much included) were tasked to design and build two brick totems at the entrance to the museum in just one day. The aim of the exercise was to practice some of the techniques present in Salmona's architecture, involving 'Patrón' (pattern), 'Calado' (hit and miss), ‘Cremallera’ (toothed corners), and 'Tejido' (weaving). It was about designing by doing, not by drawing, and as we began to experiment with the bricks, Maestro de Obras Alfonso, Roger and Juan helped to guide our lay hands. The morning was spent experimenting without mortar, whilst the 'cemento' was introduced in the afternoon to solidify our proposals. It's fair to say our setting-out was assuredly inaccurate and trowelling of the mortar increasingly chaotic as we built against the clock, but we got a taste of dealing with these unique bricks and the challenges of construction. It was an involving day, throwing up the classic difficulties of team working in unknown quantities, though both totems were completed by the close of play (thereabouts) and I think there was a collective appreciation, perhaps even surprise, at the beauty of the final results.