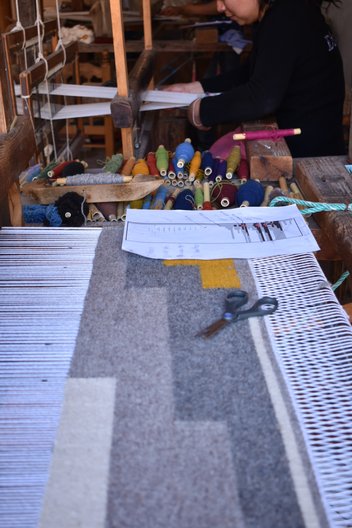 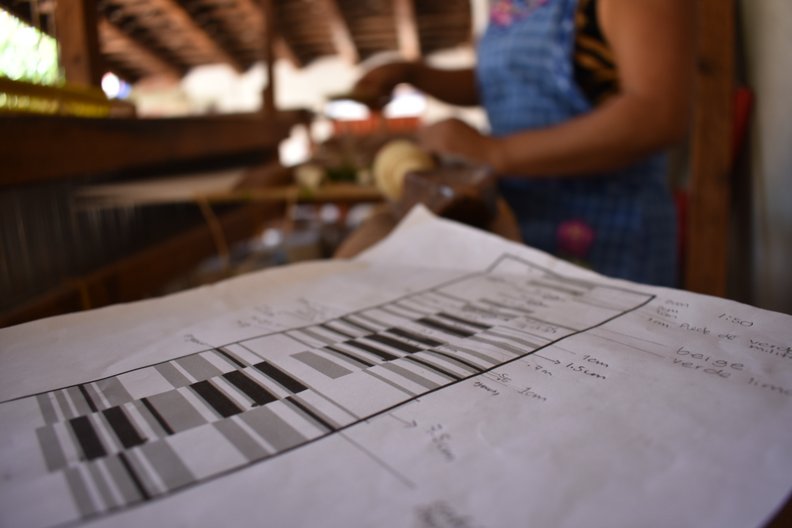 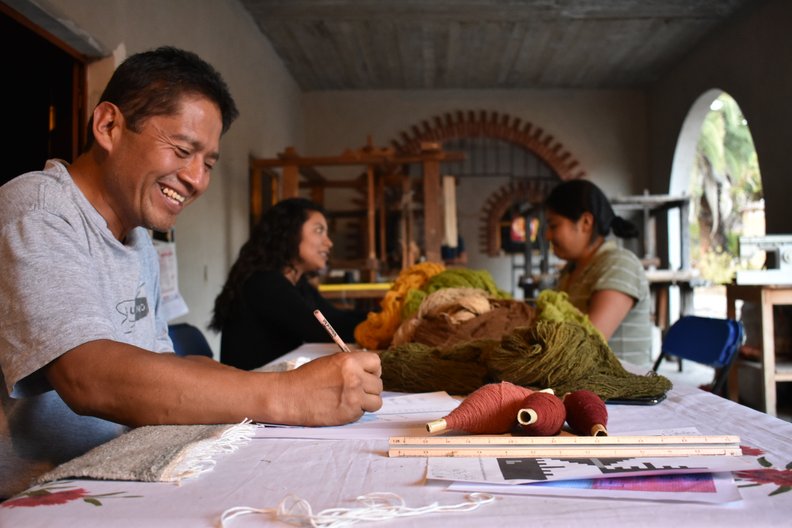 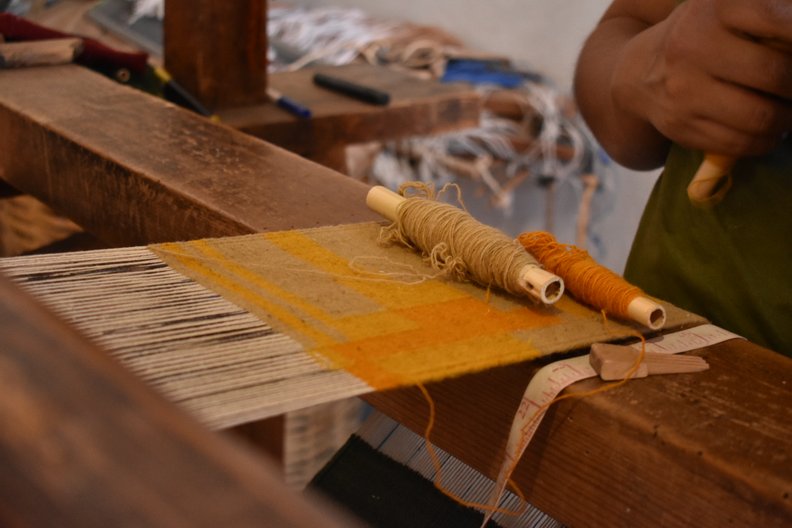 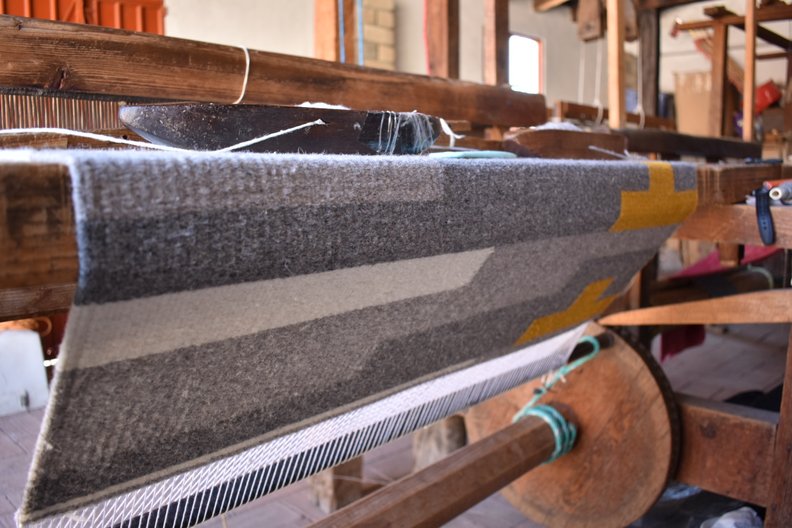 Lynne Mennie (Scotland), one of the designers selected for the Crafting Futures residencies in Mexico in February 2019, reflects on her experience in Oaxaca.

I travelled to Oaxaca from Aberdeen, Scotland at the start of February 2019 to take part in the Crafting Futures Mexico programme, a collaboration between the British Council in Mexico, Applied Arts Scotland (a membership society by makers for makers) and Oax-i-fornia (a non-profit seeking to engage artisans with designers to promote the co-creation of contemporary craftwork and offer alternative routes to market). I left Aberdeen on a snow-filled day with winter jacket and boots, which never saw the light of day for the month I was in sunshine-filled Oaxaca!

The month-long programme included a three week residency based at the ex-Hacienda de Guadalupe, the home of Oax-i-fornia just outside Oaxaca City, followed by four days of public workshops around the state of Oaxaca. Four of us were selected to take part in the programme, two practising designers (one from Mexico and one from Scotland) and two recent graduates of design from Oaxaca. Throughout the month we worked in two teams, each made up of a practising designer plus a design graduate: in my case, working with Dalila Rubicela. The distinction between “designer” and “maker” is clear-cut in Mexico, but is often the same person in Scotland, as is in my case. For my own practice, I design and create handwoven textiles that are inspired by scientific data, including DNA sequences, ancestry principles and bioacoustics. It was this data-driven design process that I proposed to trial with weavers in Mexico.

For the residency, I had proposed to work with pedal loom weavers to create a new collection of patterns inspired by sounds, building on an ongoing collaborative project in Scotland - Aural Textiles - that explores co-creation of textile patterns inspired by the sounds around us. The process of pattern creation includes collection, visualisation and then transformation of sounds into textile patterns using open-source software and published processes.

For the residency, Dalila and I worked with members of the Bii Dauu collective of artisan rug weavers, all of whom live and work in the town of Teotitlán de Valle in Oaxaca state. Expecting to work with up to four weavers, it was a wonderful surprise to discover that nine of them from three separate households wanted to take part in the project. I would only find out later the cultural significance of sounds to those involved.

Starting off with a workshop to demonstrate the process of converting sounds to patterns, each weaver then recorded a sound of personal significance to them – birds from the area, church bells ringing, crickets chirping at dusk, the chinking of beer bottles in celebration, a marching band, the mixing of hot chocolate, their baby laughing, or their daughter counting to ten in their native language, Zapotec. (One of the bird recordings was interrupted by a cell phone ringtone, and we jumped at the opportunity to use this to comment on present day society and intrusions into the world around us!) For each of the sounds, we worked to generate a pattern that could be woven on the pedal looms using methods familiar to the weavers and using colours that could be created with the natural dyes promoted by the collective. For this project, we also chose to reference the geometric designs typical in traditional rug weaving from the region, which are themselves inspired by the grecas found in nearby Zapotec ruins from pre-Hispanic times.

Despite having limited shared spoken language with the weavers of Bii Dauu, a crucial aspect for the successful completion of this project was our shared language of weaving by hand, and the resulting technical understanding of what was (and was not) achievable within the time and resources available. This shared skill set also engendered a mutual respect and trust between all of us that transcended the typical hierarchies that can exist between “designers” and “artisans” in Mexico.

After two weeks working between the three households to create a series of nine handwoven rugs, we reached the final exhibition for the Crafting Futures Mexico 2019 residency. This took place at Tienda Q in Oaxaca City, and was a combination of our sound-inspired rugs together with the carrizo pieces produced by Pilar Obeso and Sam working with Magda and Matteo. The exhibition opened with a private viewing for all involved in the Crafting Futures Mexico residency, past and present. Here, the artisans had the opportunity to describe their perspectives on the project and my mind was blown! They revealed the importance of sounds to their culture and to their connection to place and people, and their joy at being able to visualise these sounds in their weaving. Women were excited by the equal value placed on their selected sounds and the opportunity to express their voice. Technology was embraced as a means to engage differently with the world. And the younger members of the collective were re-connected with their weaving practice and able to identify opportunities for future experimentation. I may have cried tears of joy… After the private viewing, the exhibition opened to the public and the venue was quickly packed with curious Oaxacans enjoying the work presented, talking with all of the participants, and enjoying a wee taste of Mexico and Scotland.

So what next? Well, firstly, Applied Arts Scotland are working to bring the prototypes exhibited at Tienda Q to Scotland for exhibition, and have been considering how aspects of this programme can be translated for the benefit of more makers in Scotland. The weavers from the Bii Dauu collective have already started recording more sounds that they want to turn into new patterns; and we discussed ways that they could capitalise on the story-telling aspects of this work to retain a competitive advantage over those who might attempt to copy the patterns without having knowledge of the sound behind it. The Aural Textiles project in Scotland will shortly expand out to encompass other making disciplines, so that we can see what happens when sounds are used to inspire designs in other creative sectors. And I’m looking for ways to get back to Mexico with my family so that they can directly experience the wonders of Oaxaca!

In August 2017, the British Council, in partnership with Oax-i-fornia and curator Ana Elena Mallet, launched Crafting Futures Mexico, an experimental collaboration that stimulates a creative dialogue between British and Mexican designers and local emerging designers, to work with a select group of artisans in Oaxaca. The residency as well as the public programme, developed in collaboration with Applied Arts Scotland, generates new design methodologies as tools for social change.  For programme updates, visit the British Council Mexico Arts website.