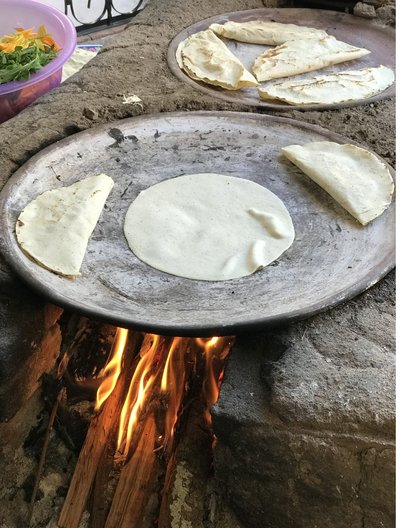 Quesadillas on the comal 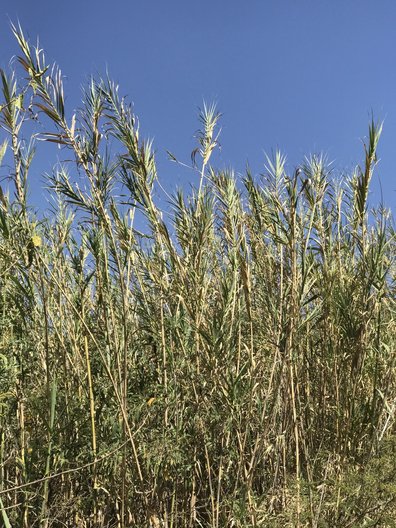 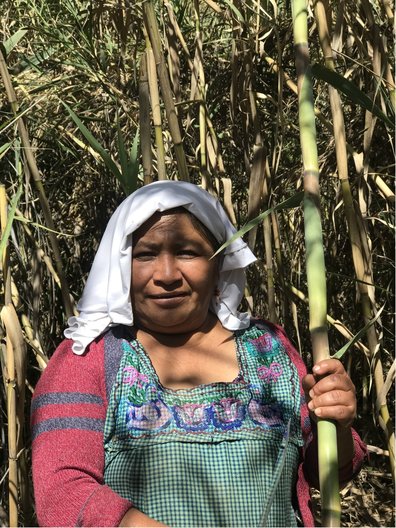 Magda on a carrizo field 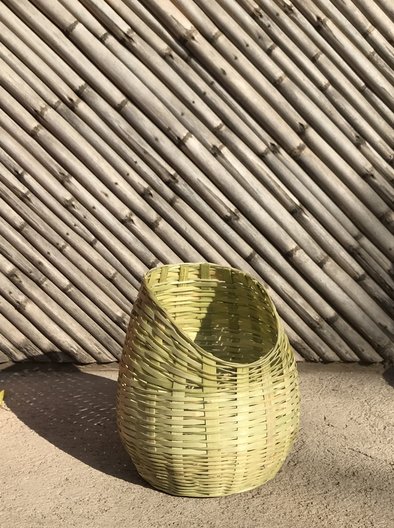 Our first piece and the beginning of everything 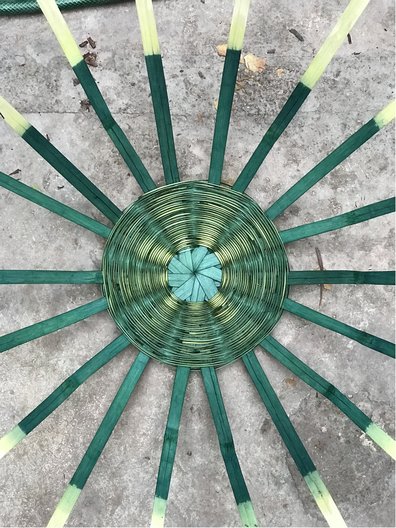 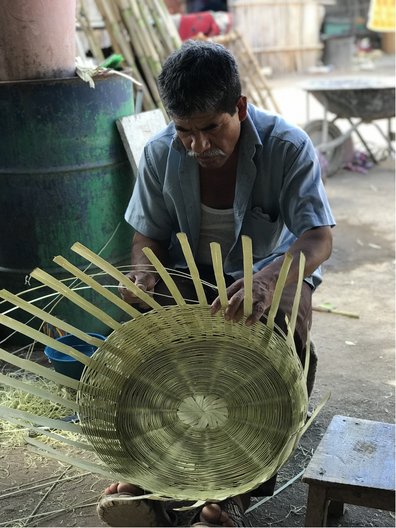 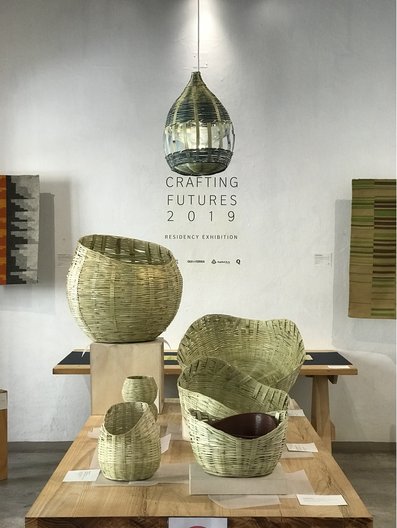 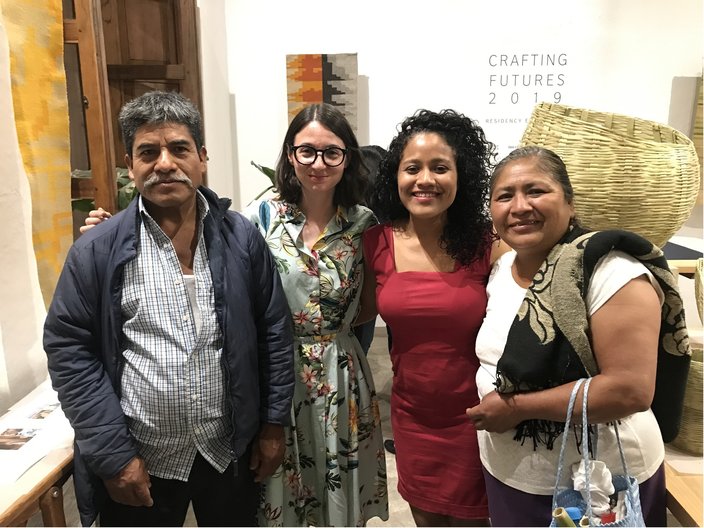 Pilar Obeso (Mexico), one of the designers selected for the Crafting Futures residencies in Mexico in February 2019, reflects on her experience in Oaxaca.

A roller coaster made out of carrizo

I was guided towards reed by a hunch. I had never worked with it nor a similar material, but something about working hand by hand with Magda and carrizo (reed) just felt right when I decided to apply for Crafting Futures Mexico. Later I was told that Magda was ‘the bomb’, and boy if they were right, she is such a character!

It wasn’t my first time in Oaxaca, as a Mexican (designer), Oaxaca is an obligated state to visit. It has everything… rainforests, beaches, one of a kind biodiversity, delicious food, mystical drinks, and of course beautiful craftmanship made by amazingly talented artisans, also did I mention delicious food?! But this time it was different, I was fortunate to fully immersed in the everyday life of the Oaxaca Valley and its people. Every day for three weeks I woke up to the most splendid sunlight at Ex-Hacienda Guadalupe in Tlacochahuaya —a small town 40 minutes away from Oaxaca City—, just to have a vital cup of coffee and a really tasty breakfast in the company of my much loved fellow comrades: Lynne Mennie from Scotland, Dalila Rubicela from the Central Valleys and Samantha Romero from the Oaxacan coast. Each day Samantha and I were driven to Santa Cruz Papalutla —another small town from the valley just a few minutes away from Tlacochahuaya—, to learn from Magda and her husband Mateo all about carrizo and how to weave it. Meanwhile, Lynne and Dalila would be in Teotitlán del Valle with the Bii Daüü cooperative weaving sounds out of wool in pedal looms.

Magda Ángeles and Mateo Bernardino have been working as a team for more than 30 years, they represent the fourth generation of carrizo weavers in their families. Magda is the boss, with a few words she can make anything happen, while cracking some jokes and enlightening the space for everyone’s delight. Mateo, in the other hand, is more reserved and a man of few words, but so sharp and crafty! He communicates through his hands in a remarkable way. The first time we visited their home they took us for a short walk to show us the natural habitat of carrizo; turns out that carrizo is found in wetlands throughout temperate and tropical regions around the world. Once you know how easy is to spot carrizo in rivers or even creeks, you can’t ignore it. For some people carrizo is a plague… that right there blew my mind! Something that for a bunch of people is considered not worthy, for a few others mean their main source of work. Carrizo is like bamboo’s second cousin; is a structural material capable of support a full house, but not as flexible as bamboo. It has its limitations. Magda would say that carrizo is annoying. I think she has a love hate feeling towards it. She is not only married with Mateo, she is also in a long term relationship with carrizo.

In Oaxaca most artisans use carrizo to create simple baskets, but Magda and Mateo aren’t most artisans and their technique is far from simple. They have been working with Raúl Cabra and Oaxifornia —our hosts and guides at Ex-Hacienda Guadalupe—, for 10 years now. They created a gorgeous set of hand woven carrizo lamps that has been exhibited and published by international museums and press; and illuminates restaurants and hotels all over Mexico. While writing this I picture Magda telling the story about that time she traveled with Raúl to New York for the inauguration of an exhibition where her lamps were displayed. She loves that story, every time she tells it her eyes light up. I like to imagine her full dressed with her traditional Zapotec gown, dazzling everyone with her presence and smile at the Museum of Arts and Design.

I spent most of my time at Magda and Mateo’s home observing in detail their day by day and team work dynamic —Mateo is the one that goes to the wetlands for the carrizo, Magda gets the material ready, Mateo is the originator, both of them weave. Their tools are machetes and mallets, needless to say you have to be quite skilled with these instruments in order to not lose a finger. I’m not handy, I’m butterfingered, so for the safe of the team I maintained my distance and focused on watching and asking a lot of what ifs… Mateo, what if we stop weaving this side and continue weaving the rest of it? Could we size up this and make a giant version? How could we create holes out of the carrizo weave? We’ve mastered an up and down, what if we multiply it by 2 or 3 or 4? What if we hand dyed carrizo with indigo? Mateo would then study all the possibilities, Samantha with her cheerful personality would pep everyone up, Magda would gabble away and I would push for more. Through questioning the limitations and the ways of the carrizo, experimenting, cheering and laughing our collaboration was born. Creating every piece became a challenge and I’m so thankful with Magda and Mateo for letting us encourage to go one step further in such a short time and while dealing with some health issues. I have a mental image of them feeling so proud of the pieces —and with good reason! We developed a way of making carrizo waves where before there were plains—, during the inauguration of the exhibition at Tienda Q that makes my heart melt.

This was a once in a lifetime experience that I will cherish forever. I jumped off the cliff with my eyes wide shut expecting that whatever happened I would enjoy the road and would be blissful and fulfilled by the endpoint, and that is exactly what happened. For someone who is used to follow a creative process and plan everything in advance, this residency was the perfect adventure.

In August 2017, the British Council, in partnership with Oax-i-fornia and curator Ana Elena Mallet, launched Crafting Futures Mexico, an experimental collaboration that stimulates a creative dialogue between British and Mexican designers and local emerging designers, to work with a select group of artisans in Oaxaca. The residency as well as the public programme, developed in collaboration with Applied Arts Scotland, generates new design methodologies as tools for social change.  For programme updates, visit the British Council Mexico Arts website.