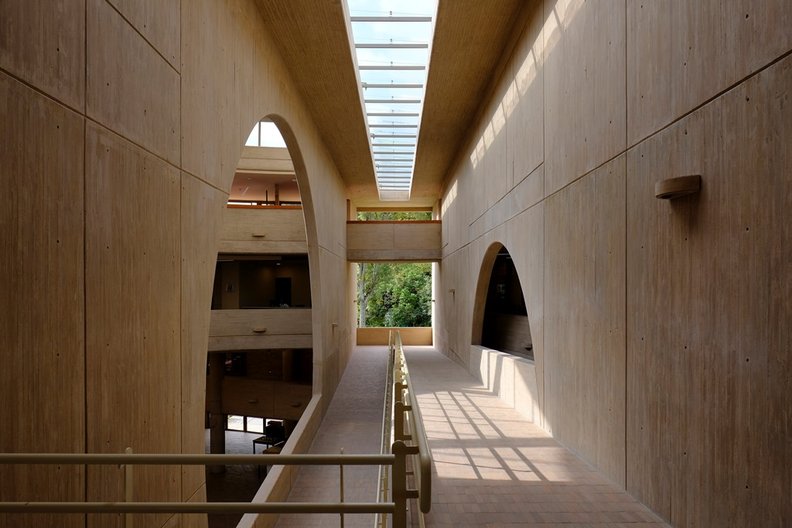 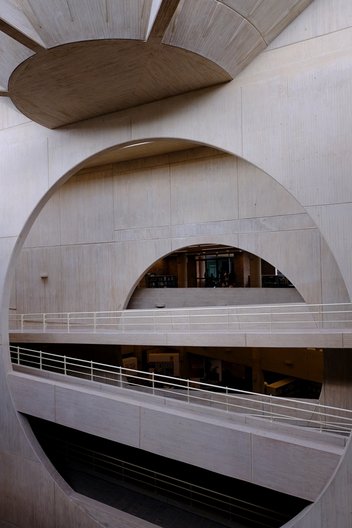 Centro Cultural Universitario Rogelio Salmona - A Play of Vertical and Horizontal Elliptical Voids in the Library, Reminiscent of Louis Khan 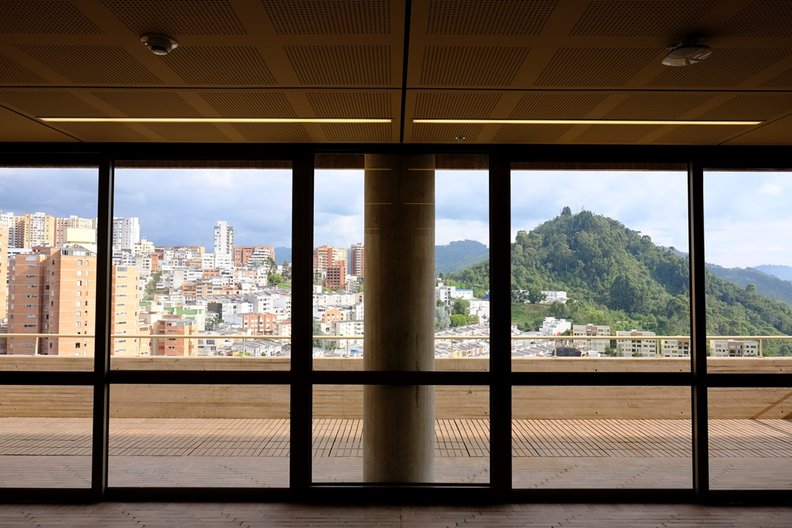 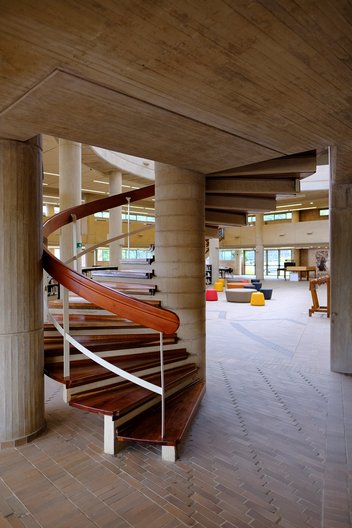 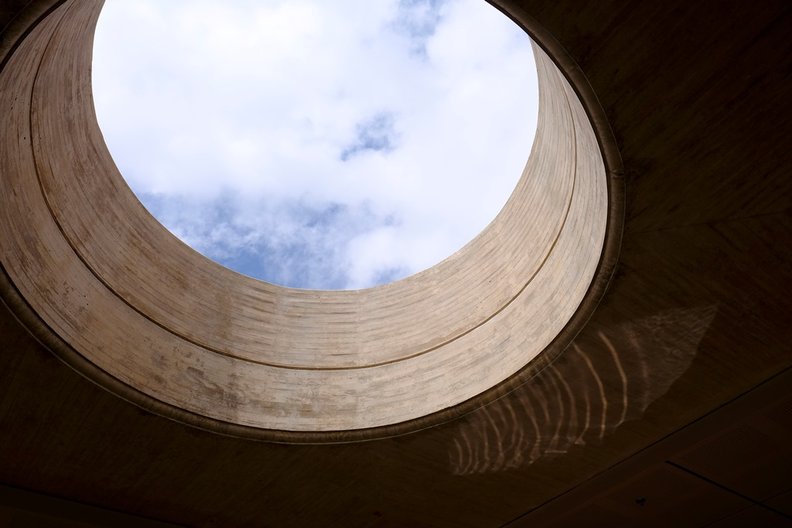 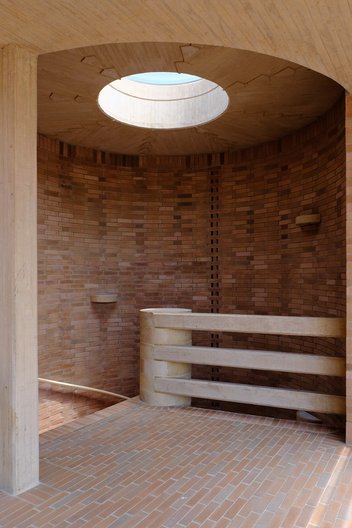 I have left Bogota and set forth for new territories, winding my way up through the coffee region from Armenia to Manizales to Medellín, visiting a key Salmona project in each city. As I travel across the Andes by bus, I am struck by two things. One, it is surprisingly hard to get a decent cup of joe despite the region's production of some of best coffee in the world. Two, my journeys are stunning as I weave through the steep valleys amidst verdant and wild backdrops, though I am surprised to see the innumerable infrastructure projects apace here. The odd unfinished bridge protruding from the hillside and half dug tunnel is very much a part of this landscape, but with train infrastructure sorely lacking these precarious roads are actually the lifeblood of the country.

Out of all my destinations it is perhaps the smaller, more relaxed city of Manizales that feels like the (literal) breath of fresh air I was subconsciously searching for. The very recently completed first phase of the Centro Cultural for the Universidad de Caldas is an ambitious project from an ambitious client, and has a fascinating story. Rogelio Salmona was originally asked to design a new library and cultural centre in 2002 by the then director of the university. He developed the outline design but the project was shelved soon afterwards, somehow falling foul of the politics and aspirations of the school at the time. The project was resurrected in 2007, and though Salmona was increasingly frail at this point, he developed a new concept design to meet a revised brief. Sadly he passed away not so long after, and the outline design was actually completed by María Elvira Madriñán, Salmona's widow and long time practice collaborator. Political wrangling in the school drew the universities focus away from the project furthermore and another five year hiatus ensued. It was not until 2012 that María Elvira Madriñán was asked to lead the project and developed the sketch design into the functioning building today.

It is no doubt a leap of faith to build a Rogelio Salmona building, perhaps no more so than now. The details are often intricate, the construction process demanding, and areas of 'useful' floorspace are impossible to calculate so efficiencies seemingly dismal. A simpler, cheaper, more efficient alternative could have easily been procured by the university, but the realisation of phase 1 is testament to the belief and commitment of a small group of key proponents at the university, many of whom are actually trained architects themselves. This group has been instrumental in the realisation of the project despite a number of adverse circumstances, whether it be university politics, expensive constructional challenges of the steep hillside site, or the identification of new funding streams and finding new ways for the building programme to operate.

The project is very much of Salmona, though tighter construction regulations, future maintenance requirements and cost cutting exercises have changed the initial feel somewhat. Upon arrival the building is encountered as one rather large volume, and doesn’t quite nestle and step into its hillside site as other projects tend to do. A decision was made to construct the first earthquake-proof Salmona building however, and the array of expensive seismic dampers to the foundations and associated concrete raft played a prominent role in the shaping of the vigorously engineered volume above. Whilst detailed designs in fact showed a stepped ground slab, this was heavily rationalised on-site, presumably for ease of construction. The resulting impression is of a hovering sensation to the buildings hillside elevation, as opposed to the more familiar feeling of something erupting from below.

The landscape is yet to be finished, or even started for that matter, as the wide extent of imagined park, connecting the building with two city neighbourhoods, could surely constitute another construction phase all by itself. The future terraced, wooded landscape that has already been designed would no doubt help to anchor the building into its steep hillside site. Once inside, a few building services stand prouder than expected, and though designs were produced to neatly conceal these with backlit glass fascias in timber housings, their plastic skins remain starkly naked against the concrete. It is a shame when considering the potentially small additional time and cost that could have been invested to deal with this. That said, I suspect many building users may never notice, simply looking passed these awkward pipes or not in their direction at all.

Crucially, these groaning pitfalls are small change. Built by a local contractor with little experience of exposed concrete or brick (the tradition in Manizales is not so strong), the quality of construction is astounding. The project team put a strong emphasis on material testing and the results are evident. The ochre tonality Salmona was so fond of has surely been perfected in this project for the very first time, with both brick and concrete glowing warmly and harmonising effortlessly in the soft evening Colombian sun. The brickwork is neat and details true to form, but it is really the sculpting of the beautifully poured in-situ and board-marked concrete inside where the building comes to life. A play of vertical and horizontal elliptical voids in the library make for an exciting place to study and gaze. The concrete to the vertical feature wall dividing library and circulation spaces actually had to be poured in one tense day to ensure consistent colouration. Dramatic shadows are cast from the skylights above, and the ensemble is more than a little reminiscent of Louis Khan, an architect whom Salmona much admired. There are a few wobbles here and there as formwork has bowed, but these are relieving, beautiful imperfections that remind us that this large building is in fact largely hand made.