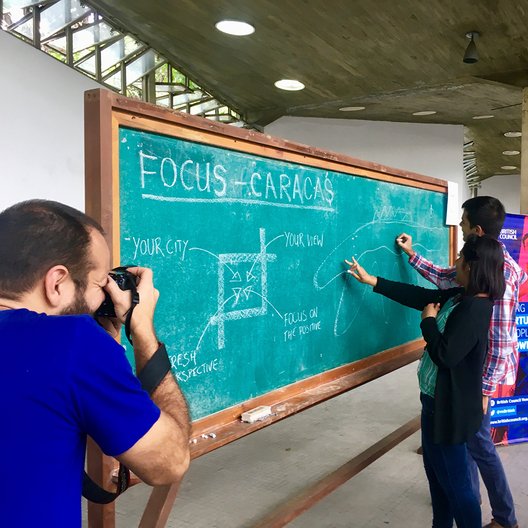 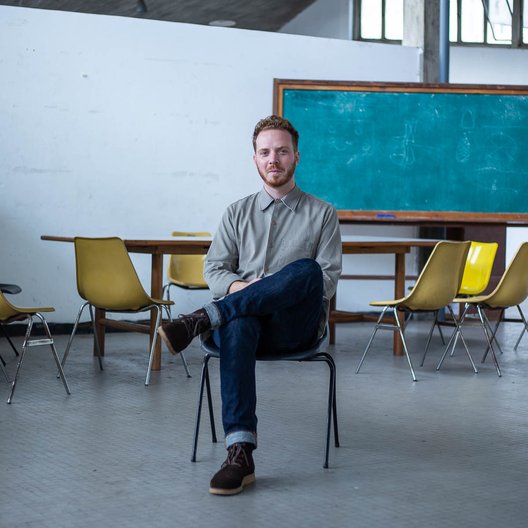 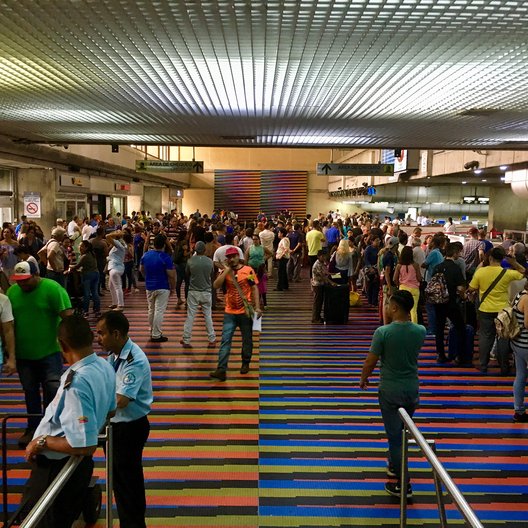 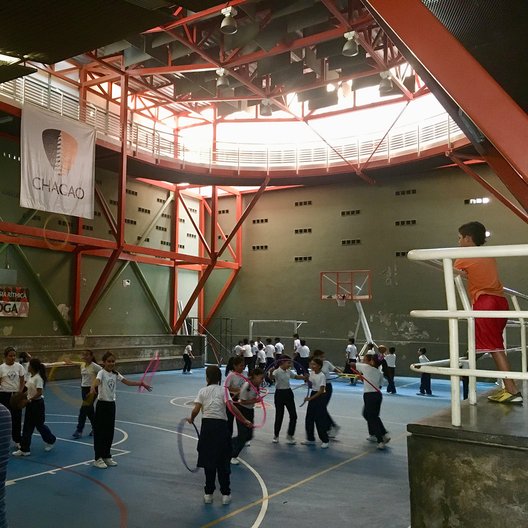 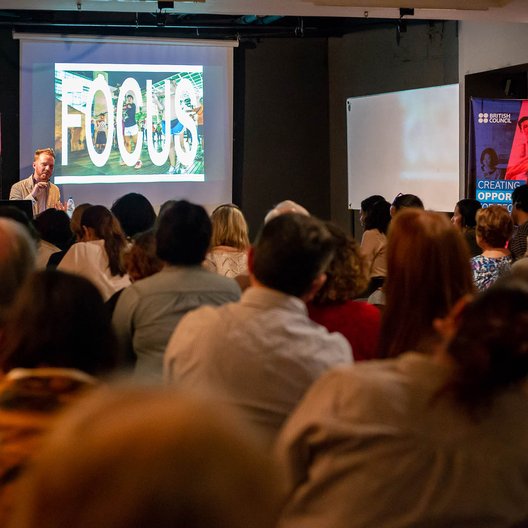 ‘Imagine the City: a Focus on the Positive’ discussion 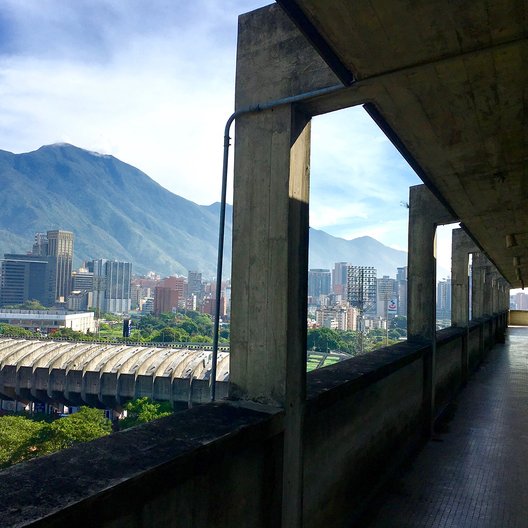 View from the Architecture Faculty at the Universidad Central de Venezuela 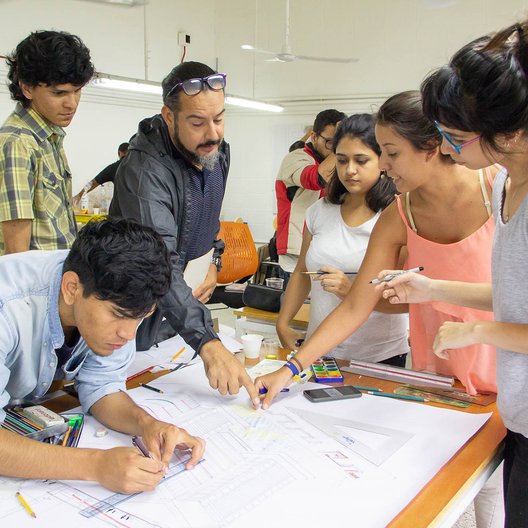 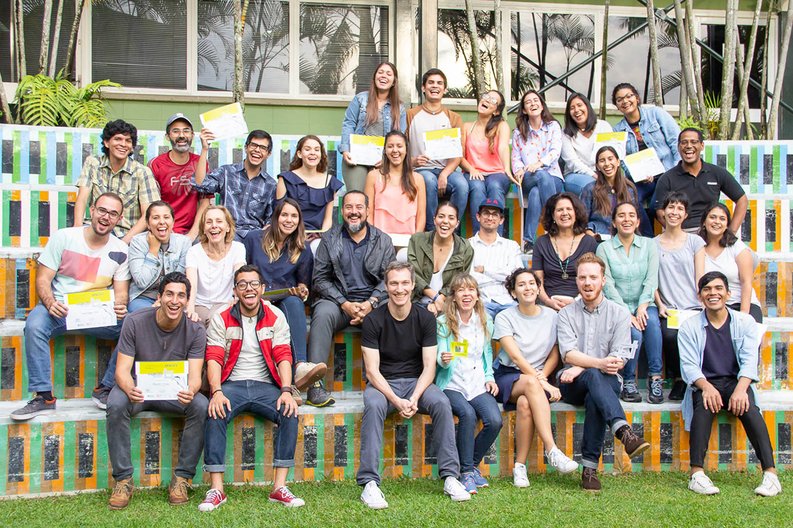 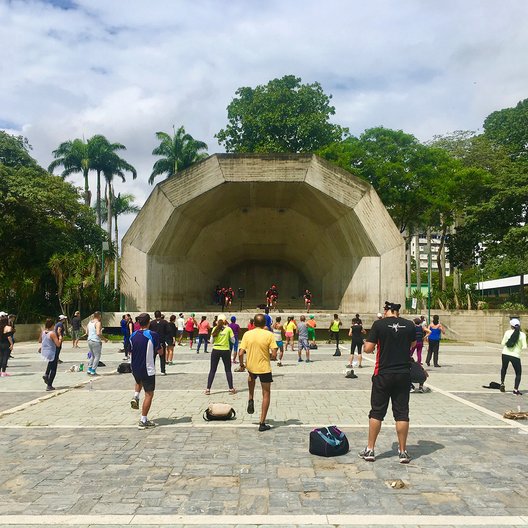 Landscape architect and designer Will Sandy is the winner of our Reframing Spaces Caracas open call. While in Venezuela, he explored ways of positively transforming neighbourhoods through public space interventions. Below, Will shares his experineces from his initial scoping visit to Caracas.

The plane begins to descend, the crystal blue Caribbean Sea reveals itself as we track the Venezuelan coastline into Maquetia ‘Simón Bolivar’ International Airport. The airport clings to the edge of the Caribbean, separated from the capital city of Caracas by the omnipresent Ávila Mountain. The Ávila, defines the city’s Northern edge, always visible, it provides a vital green lung and point of orientation.

“Will Sandy, Will Sandy, Will Sandy”, a bizarre, yet comforting sound to hear as I enter the airport building. My airport liaison, standing at the top of the escalator, quickly helps me get through immigration. My eyes are drawn through the building by a large sprawling kinetic mosaic by Carlos Cruz Diez. As first impressions go, this sets the tone for a dynamic and colourful week ahead! Nearly as long as the artwork, is the queue of people leaving the country for Europe.“This has become a regular occurrence”, the head of airport security informs me.

The journey into Caracas takes us along the Autopista Caracas - La Guaira, climbing up through the Ávila National Park, before descending into the metropolis. The city builds up quickly, the traditional developed urban configurations, interspersed with the infill and opportunistic building of the city's barrios, juxtaposed always by the green backdrop of the Ávila.

The city is alive, the street outside is bustling with people on their way to work, surprisingly many are on foot. As we set out, it immediately became clear that Caracas, like many cities that developed in the same period, is very car centric. The main highway divides the city into North and South, contouring the culverted River Guaire. It’s a busy first day. We traverse the city, visiting numerous landmark buildings including the Barbican-esque, Teresa Carreño Cultural Complex, a tour of the Bigott Foundation, a cultural institution located in Petare.

A highlight of the day, was a visit to the Jesus Obrero Technical Institute. Founded in 1973, the institute provides young people with training in robotics and electrical engineering. The institute had an amazing energy; it provides an educational oasis in the heart of the neighbourhood of Catia. The students are incredible, exclaiming confidently, “we’re not kids…we’re going to be robotic scientists, architects and electronic engineers!”

First stop, the Chacao Cultural Centre. An exciting and vibrant multidisciplinary space, used for performances, public exhibitions, rehearsal space and talks. We then moved on to the nearby vertical gym. The vertical gym provides recreational space across multiple levels, presenting an innovative spatial solution in densely built up areas. On my visit the place was buzzing with activity, with different groups taking advantage of the multiple levels.

Lunch was hosted by the team from CcsCity450, a cultural programme of work, exploring the city's many important buildings, public spaces and local landmarks. Lunch was a lively exchange with lots of synergy between my work and the work they are currently implementing in Caracas – a good sign of things to come and building positive local partnerships to move forward.

We then took the opportunity to visit the Universidad Central de Venezuela (UCV), a UNESCO world heritage site designed by Croydon-born architect Carlos Raúl Villanueva. Under Villanueva’s guiding principle, the Synthesis of the Arts, the campus design plays with clever sightlines and perforated surfaces to blur the interface between architecture, art and landscape.

That evening, I gave a presentation to a room full of local architects, students, working professionals and the general public. A lively and playful debate followed with a busy Q&A session, the thread of which has continued since my return to the UK, enabling me to build further connections for this project.

Back at UCV for the first day of our Focus: Caracas Workshop, boundaries and thresholds became a key topic of conversation.

Attended by 20 architecture students, the three-day workshop was an ideal opportunity for me to understand the city further and see it through their eyes. The students' first task was to explore the perceived barriers they encounter on a daily basis, while at the same time celebrating existing solutions. We then identified a physical barrier in the studio, which involved some theatrical interpretation, playing with different screens and cut outs and exploring how these might be resolved, creating connections, both physically and psychologically.

Caracas is a city of contrasts, urban and rural, formal and informal, divided by physical and psychological barriers.

I created a viewfinder for the students to cut out and use to focus their research, an opportunity to capture the city from a fresh perspective. The students didn’t disappoint, presenting an eclectic mix of images framing their view on the city. The responses were diverse, but there were several recurrent themes and challenges to overcome; the city is divided, car-centric and difficult to traverse on foot. This, coupled with the many preconceived ideas that people hold about the city, reinforces the physical barriers in the landscape.

The ideas were great but we needed a real site to test them - the University Hospital of Caracas was selected. A publicly accessible hospital, it provided a place where people from across the country convene, a cross-section of society arriving in different modes of transport converging at one place.

As with all hospitals there were many sensitive issues, but here this was compounded by the fact that it formed part of the wider UNESCO site. The students were tasked with looking at a condensed journey to the hospital, understanding the existing site context, taking into account successful interventions, both formally designed and informally created.

As with the development of the city's barrios, the urban infrastructure of the city in many instances is defined by the people. For example, there are no formal waiting areas, bus stops or meeting points at the hospital, they are formed under the canopies of the nearby trees, which fulfils the natural requirement for shade and shelter. The buses therefore, stop where the people are standing, not at a pre-determined stop. As one student observed:“Sometimes, the bus never arrives, so the spaces just become informal meeting and gathering points.”

The final day was hosted by Incursiones Studio and located at the base of the Ávila, this provided, a great location to finish the week.

The group had really started to come together and a relaxed yet productive atmosphere took hold as the students raced to get their designs completed, ready for final presentations to the invited audience of local architects and urban practitioners.

The proposals were bold and ambitious and the students presented research to back up their ideas and designs.

Visual identity was a key theme across the proposals. Essentially if we are going to promote the connection of the city, we need to make people feel safe, providing them with a recognisable identity and continuity along any given route or journey. A key shared strategy adopted by all the projects was the redefinition of spatial use. Currently the car dominates and all the proposals set about shifting the balance, with one giving the pedestrian the priority, a somewhat radical approach in a city dominated by the car.

Modular design was also apparent with the suggestion of a kit of parts, reconfigurable and flexible and with the ability to evolve with each user group. This is an idea that could easily translate across the city. Building on the idea of identity, this kit of parts would act as a visual link between neighbourhoods.

On the whole, I came away with some exciting ideas, and feel reassured that the ideas I have already been thinking of align with those of the students and the professionals I have encountered during my stay. There has been a real design synergy throughout the week and I can’t wait to progress the project further. I have invited all the students to be part of the project and look forward to working with them over the coming months.

Given the focus on the car, it was a pleasant surprise to learn that every weekend, many Caraqueños take to the cities public spaces and the Avila Mountain for walks and outdoor pursuits. A visit to Parque del Este, designed by Roberto Burle Marx was incredible. The park filled with people, working out, picnicking, promenading and exploring its many different areas. The activities were diverse and I couldn’t think of any park back in London that would offer this type of weekend activity.

The highway at the base of the Avila is closed to vehicles every Sunday morning allowing people to reclaim the streets, walk, cycle and use the space for leisure. This clearly demonstrates that given the opportunities and the space people take ownership and occupy public spaces in a whole variety of activities. In doing so they unify and rediscover the fundamentals of the community and all its benefits

A quick lunch with the project team at Casa Bistro, an amazing restaurant with much of the food grown on the roof of the nearby Berol crayon factory. A final Papelón con limón – a traditional Venezuelan drink, made of raw hardened sugar cane juice, water and lime added a refreshing end to my first visit to Caracas!