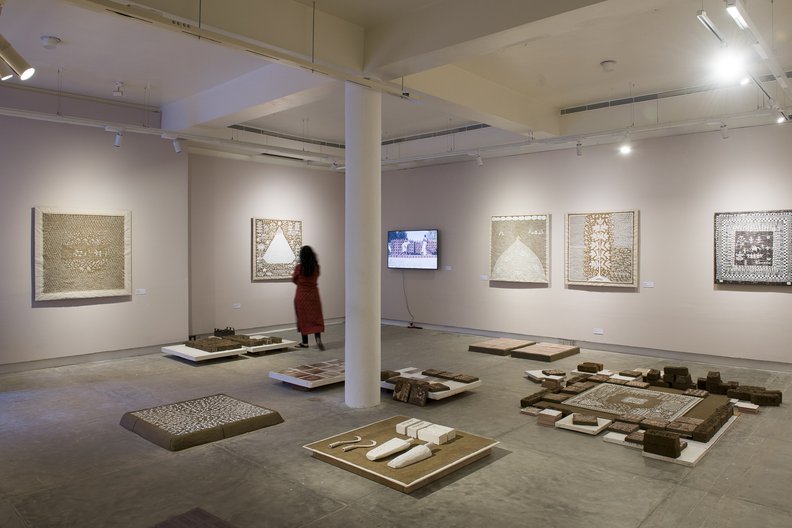 The installation ‘Made Out Of Place’ at the Indian Ceramics Triennale, Jawahar Kala Kendra 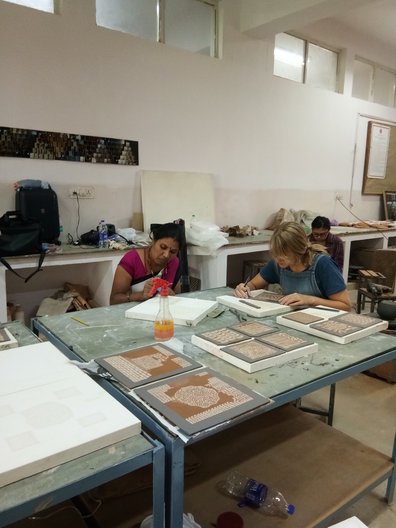 Joanne Ayre and Rasika Hengadi slip-trailing at the Indian Institute of Craft and Design, Jaipur 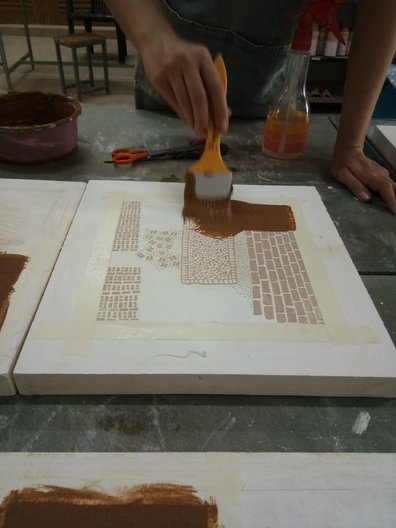 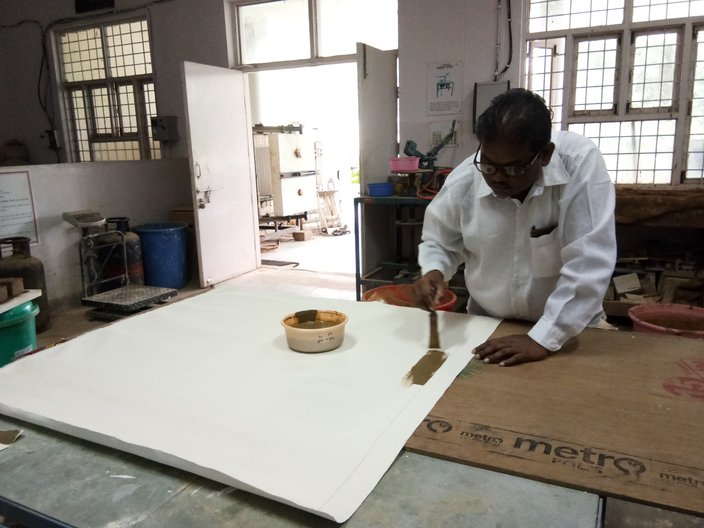 Ramesh Hengadi preparing a canvas at the Indian Institute of Craft and Design, Jaipur 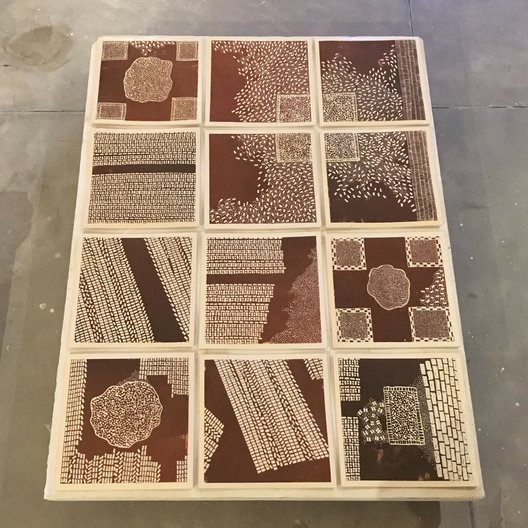 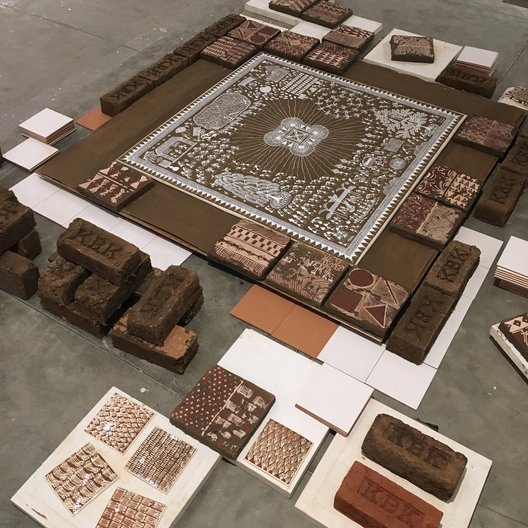 ‘There Are So Many Things Happening Here’ Ramesh and Rasika Hengadi and Joanne Ayre, canvas, cow dung, acrylic, clay, ceramic tiles, made in Jaipur, 2018 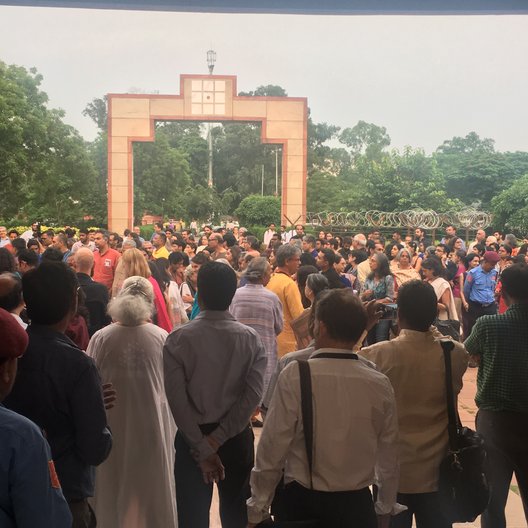 The opening of the Indian Ceramics Triennale, Jawahar Kala Kendra

We're excited to collaborate with the first Indian Ceramics Triennale: 'Breaking Ground', happening from 31 August to 18 November 2018 in Jaipur, through our Architecture Design Fashion Biennales and Festivals fund. Below UK based ceramics designer Joanne Ayre shares her experiences from taking part in the Triennale.

In August 2018, I arrived in Jaipur to participate in a residency to develop work in ceramic and clay that would form part of an installation for the inaugural Indian Ceramics Triennale at Jawahar Kala Kendra. The trip lasted for 18 days and during this time I worked collaboratively with Warli artists, Ramesh and Rasika Hengadi, and creative director, Barney Hare Duke.

A whirlwind two weeks of making and installing provided time and focus for the continuation of an experimental international artists exchange, called Heart:Beat, that I have been part of since 2016. The exchange between the UK and India, is centred around a connection with Warli artists of the Palghar district of Maharashtra. Barney Hare Duke and Jeremy Theophilus, of A Fine Line, initiated the project in 2006.

During a residency at Ramesh and Rasika’s home in Bapugaon in January 2017, we had taken the first steps of working together, exploring techniques in painting and in clay. These initial experiments had prompted the creation of new individual works, which we brought with us to form part of the installation ‘Made Out Of Place’. This movement between place, from Bapugaon to Stoke-on-Trent, has been like a moving in and out of focus. To be placed in another place, somewhere disconnected from our own traditions, gave us a chance to focus on exploring new collaborative pieces out of the places to which our work is tied.

Drawing on the shared experience of the HeartBeat project, the installation also included works created off- site by the other, UK based, project artists; Stephen Dixon – ceramicist; Jasleen Kaur – artist; Johnny Magee – film maker; Jason Singh – musician sound artist. The works together give impetus to the idea of developing local making and learning spaces, in both Bapugaon and Stoke-on-Trent, where cultural production will continue to take place, be developed and engaged with.

Along with the provision of a studio at the Indian Institute of Craft and Design to work from, we were supported by staff and students. They worked alongside us on all things practical, from making bricks and mixing clay. The students radiated with passion for the event and the artists’ work, and you could sense their aspirations being fine-tuned by the experience.

The work we created included collaborative tiles, where the three of us worked across the surface of the clay with slip trailers. We also worked together on a new ‘chowk’, which was surrounded by an accumulation of tests and trials in ceramic. Entitled ‘There Are So Many Things Happening Here’ the canvas, painted by both Ramesh and Rasika together, shows an updated vision for the Kendra that they are aiming to establish at their home.

It was a real privilege to be able to exhibit amongst the other artists represented in the ICT. The team had pulled together an ambitious collection of works, showing a huge range in approach to process and material. It was astonishing to see works of such a great scale appear overnight. There was a wonderful camaraderie amongst the ICT and JKK teams, which enveloped the visiting artists too. We were left with no doubt that the inaugural Triennale has paved the way for an exciting future for contemporary ceramics in India and internationally.

As part of the trip I attended 'Setting the Ground', a symposium that sought to ‘offer a multidimensional examination of the dynamic nature of the art of clay in the current context’. The dialogue across cultures, and an alternative approach to collaboration was a subject that was touched on in formal presentations and in subsequent informal conversation. Discussions centred around ways of working with notions of tradition and rooted practice, across hierarchies and categories of artisans, craftspeople and artist, as well as notions of value and individual autonomy.

The trip was a invaluable and unique experience. It has informed my perspective on the relationship between the global and local, and provided pathways towards developing further international working practices. The trip has been personally gratifying in giving me the chance to work alongside such fantastic artists, and an opportunity to revitalise my approach to working within the context of a different international ceramics exhibition, the British Ceramics Biennial.