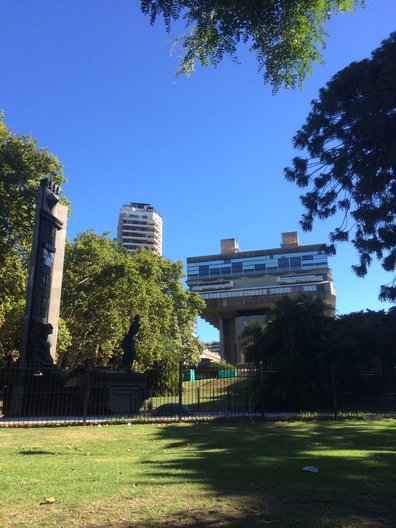 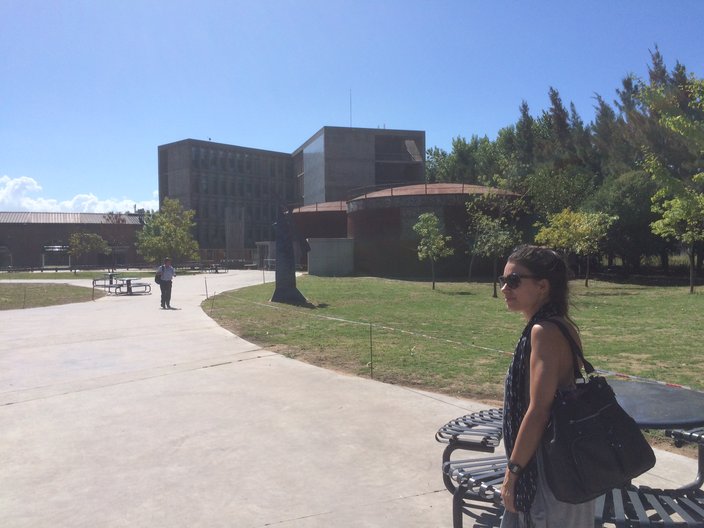 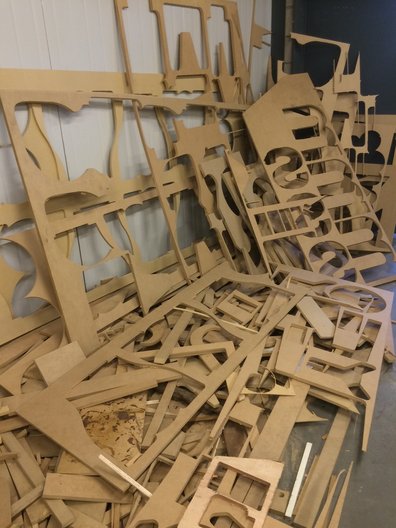 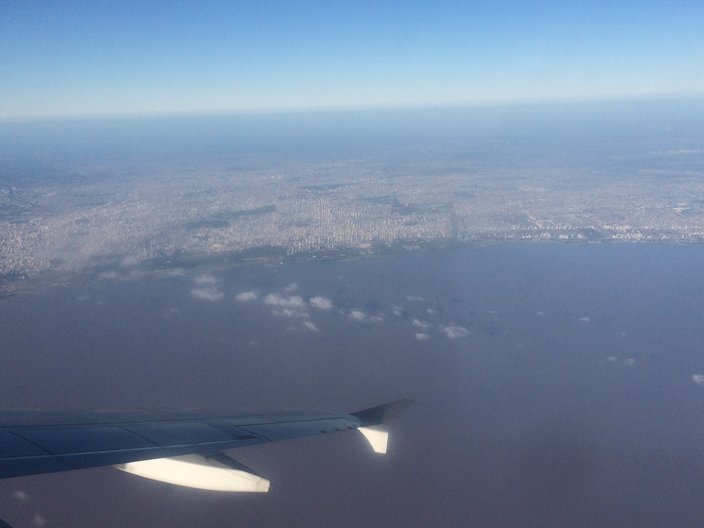 This is my first trip to Argentina so it’s an exciting prospect to spend time with Valeria Zamparolo, our Arts Manager in Buenos Aires, scoping for ADF projects. One of those whirlwind trips where you realise it’s time to leave only as you’ve realised you’ve touched down! I am passionate about cities, and Buenos Aires is a city with a capital 'C'.

I’m in town for 3 days so the marathon must begin in earnest; sadly there's little time for visits outside the programme, but I get a glimpsed of the equally loved (mostly by architects or designers) and hated (by everyone else, I'm told) National Library building designed by Clorindo Testa. And I love it!

My first official engagement - although it turned out to be a delightful, relaxed conversation - was with Fabian de la Fuente, Director of the newly established Architecture programme at Universidad Nacional de San Martín (UNSAM), in the outskirts of Buenos Aires. I’m immediately struck by Fabian’s energy and enthusiasm, which clearly filter through to the programmes he is leading at the university. UNSAM is known for its reach into the rather disadvantaged neighbourhood in which it’s inserted, attracting local students and the local community, and Fabian assures me the Architecture programme (as well as the Design one due to be launched this year) is largely driven by the local context. Issues of mobility, urban renewal and sustainable design sit at the core of the different units run by teams of mostly young architects, such as Juan Granara and Marcos Amadeo from Monoblock, who meet me on campus later in the week. This is also an opportunity to reconnect, as Monoblock was featured in Atlas of the Unbuilt World in 2013 as part of the London Festival of Architecture. Despite their ‘emerging architects’ status, their portfolio features recent major commissions, including the Museo de Arte Contemporaneo de Mar del Plata (MAR), which I sadly can’t visit this time around. A good reason for another trip?

It’s terribly inspiring to hear, both from Fabian and from Juan and Marcos, a story that is so out of sync – in a good way! – with the usual scenario of Architecture programmes around the world constantly attempting to address ‘universal’ issues, ignoring the immediate context of the communities in which they sit. I hope by creating links with UNSAM we get to learn from their innovation and contribute to the discussion they are trying to promote.

I then meet with Javier Augustin and Florence Rodriguez from Revista PLOT. PLOT is the most established Architecture magazine in Argentina, with an increasing regional reach as it recently began to be translated into Portuguese and to be distributed in Brazil, as well as most Spanish-speaking countries across Latin America. Again, the sense of energy and ambition in the Architecture and Design sectors that I’ve felt so far here is palpable in my conversation with Javier and Florence. Potential for residencies and joint publication projects abound.

The next meeting also includes some familiar faces, like Germán Lang and Paola Pavannello (Germán co-curated the Argentine presentation at IFS in 2014, and Paola took part in our first Design Connections in 2012). They’re joined by colleagues in different organisations, all tasked with promoting and best practice in design and fostering creativity in Argentina and, to a certain extent, throughout the region by creating programmes such as MICA and MICSur that aspire to bring practitioners, policy makers and the public at large together. I’m struck by an overwhelming collective energy to inspire and to influence the way a country celebrates its design sector, and most importantly, celebrates its designers.

A short hop across town leads to me to the incredible Centro Metropolitano de Diseño (CMD), a space dedicated to design and making run by the City of Buenos Aires. More than a mere gathering place for professionals – the centre is made up of a variety of studios and offices for ‘incubated’ creative businesses, as well as technical workshops, auditoria and exhibition spaces – CMD is a community space leading the transformation of a once industrial corner of the city into a creative quarter. Obvious links with the Maker Library Network here, and it turns out to be the main subject in my conversation with CMD’s Director, Enrique Avogadro.

Despite being a tad disappointed not to be able to cross the waters of Rio de la Plata to visit Montevideo due to the short visit, I’m joined by Gustavo Hiriart, who kindly makes the ferry journey especially to meet me. Gustavo teaches at FARQ-Universidad de la República, in Montevideo. Along with Daniela Freiberg, who has coordinated a couple of editions of the Uruguayan pavilion at the Venice Architecture Biennale and also used to teach at the FARQ, Gustavo paint a great picture of ambition and innovation at the school, which makes me even sadder for not making the journey to Montevideo!

However, I finish with a bang, finally meeting the three directors of TRImarchi, an incredible Graphic Design festival often described as the Woodstock of Design! There are certainly not enough of these in the world and Vale and I are determined to do some work with them this year, in Argentina and beyond. Their reach goes way beyond the design sector as each year they attract thousands to their festival in Mar del Plata, as well as to a string of smaller, pop up 'pre-TRImarchis' across the region. We're plotting one in London, so keep your fingers crossed.

I leave inspired and moved by the work being done in Argentina - and Uruguay - both by Valeria and by this handful of potential partners. So let new ideas pour in... And now on to Chile!