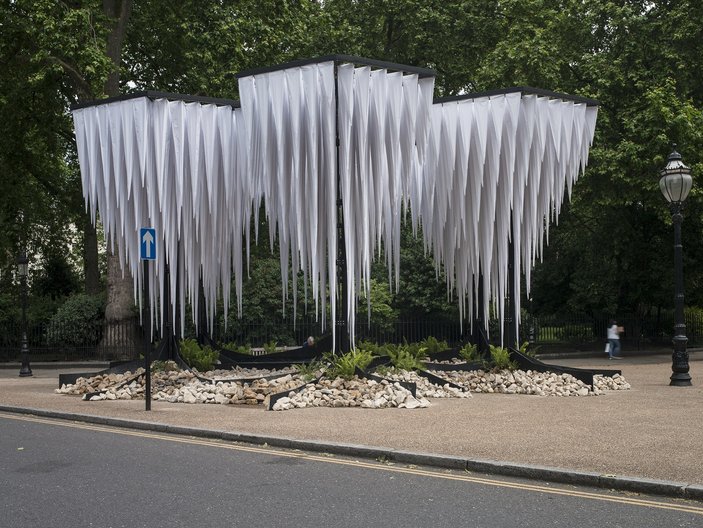 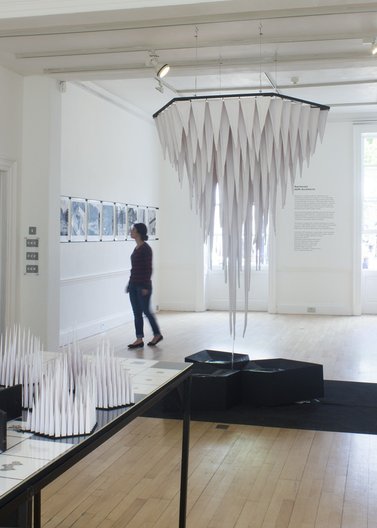 Rainforest is a public pavilion by Chilean-German architecture practice GUN Architects, installed in London’s Bedford Square during the Summer of 2014. An imposing five-metre-high micro-climate of minimal tree-like structures with a field of pyramidal fabric ‘stalactites’ which gently drip water, the pavilion is an oasis of raindrops, pools and plants – a distinct ecosystem in the centre of London that blends GUN Architects’ striking material construction with the natural environment to cultivate the formation of an entirely unique ecology.

The exhibition is part of the firm’s ongoing exploration into natural dynamics in the diverse Chilean climate, translated into the context of Bedford Square where water serves as the protagonist of the architecture, and the production of temporal atmospheres is based on its circulation and accumulation.

Vicky Richardson: Tell me what you’re planning to build in Bedford Square.

Jorge Godoy: Rainforest is a new itera­tion of Water Cathedral, our pavilion and winning entry to MoMA’s Young Architects Programme in Chile, which we built in Santiago in 2011. It was a temporary structure made out of a textile canopy, composed of dripping textile stalactites, which created an atmosphere that could be transformed by water. That was the first stage, and now we have the opportunity to try a second version.

Originally Rainforest was going to be a cascade hanging from the front of the AA, but we faced some issues with English Heritage, so unfortunately it didn’t happen. But in fact the restrictions opened a new door, which was the opportunity to build a pavilion on the square.

VR: Where did the original idea come from?

Lene Nettelbeck: The main criteria for the Young Architects Programme was that the project should be connected to water. We took that literally and tried to make a roof where water had a very strong presence. We found we could make a simple dripping system that creates, let’s say, a fresh atmosphere and also gives shade during the summer. The place where we installed it in Santiago was a huge 700m2 concrete car park, so it was important to freshen it up.

VR: What is the concern about water in Chile?

LN: In Santiago there’s very little water. If you go outside the city you realise that you practically live in a desert.

JG: It’s an increasing problem. There are signs that we’re entering a period where there will be a serious lack of water. Too much has been used for mining and agriculture. Combine that with climate change, and we see the visible effects of desertification.

LN: In Santiago you have the Andes as a backdrop and the panorama of snow in winter, but in the spring, water does not come through the city’s main river. Jorge tells me that once there was flooding, but I personally can’t imagine that. Santiago is a dry city. The Water Cathedral was meant to be a public place where people could enjoy water and have a delightful experience in the heat of the summer.

VR: How does the meaning of the structure change in the UK where water is a different kind of issue?

JG: Water takes on a new role. In London we saw it as a chance to go further – to have a wider, denser field of vegetation that can be irrigated by the stalactites. We’re hoping to create a fresh atmosphere for people and also show how water incorporated into a pavilion can stimulate the growth of vegetation or other life forms.

It’s important for us that the stalactite as a singular component somehow synthesises the complexity of the project. This is not just a technical point; the stalactite is a mediator – it’s really what calibrates or creates a connection with the environment. Everything happens through this component. Depending on the variation of the element you will have different atmospheric effects, and depending on the density of the element you will have different atmospheres.

VR: Are there connections between Rainforest and your other work in Chile? Is this a prototype?

JG: There are a lot of connections. We always try to create fields of large accumulations of material. An example is a bamboo pavilion we made a few years ago that was built using 2500 interwoven bamboo bars that created a space where vegetation could naturally weave through and grow. This was an artificial way of interweaving materials to later be affected by nature. We aim to cross these two realities: first we build, and then nature does its own work with our projects. Here, we are expecting the same. We will begin with a very clean, white stalactite screen. But let’s see what happens after two months.

VR: Do you have a prediction?

JG: We have questions. What’s going to happen with the rain? Because the stalactites can’t be completely filled with rain, we had to create a small stalactite that works as a cap for the large one. But it isn’t completely waterproof – it drips, and this will bring a totally different. It could be nice, but we don’t know yet.

LN: We’re also curious to see how it is used. Is it something people will observe, or will they sit in it and have coffee inside? I don’t know.

VR: Do you enjoy that unexpectedness?

JG: We think some birds or insects might migrate from the square to the pavilion. It’s not just about visually extending greenery – we want to create a larger ecosystem.

VR: How have you found working in London?

JG: Santiago is much more informal, which makes it easy to make things in your own way. You don’t have as many constraints. In London it’s more complicated. We had a lot of structural constraints and requirements from the council. Of course this took the project in a different direction. But new things emerged. These are constraints that ended in a positive way.

LN: For the Water Cathedral we were just told, ‘Here is the money, do whatever you want with it’, but the construction was much longer. We were on-site every day and hung every one of the 2500 stalactites by ourselves. In London there are constraints, but there is professional help: the AA School, the team from the gallery and the metal workers.

VR: You’re going back to Chile in August. What is your next project?

JG: For three years we’ve been working on a large-scale project 400km north of Santiago on private coastal land. The client wants to create something that will promote and look after nature, which will also leave a legacy for the future. It’s ambitious, and there’s still nothing on the site. Now it’s just plans, documents and conversations. It’s on a different scale, but for us it is connected to the Rainforest as an experimental project.