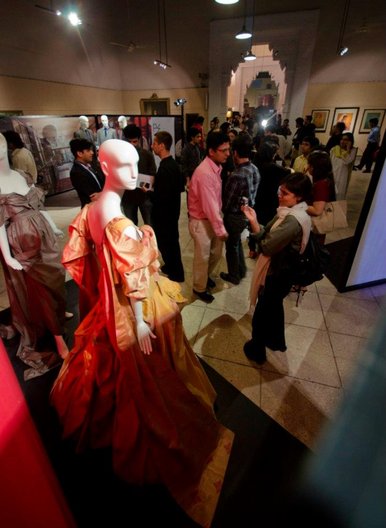 Visitors on the opening night in Lahore 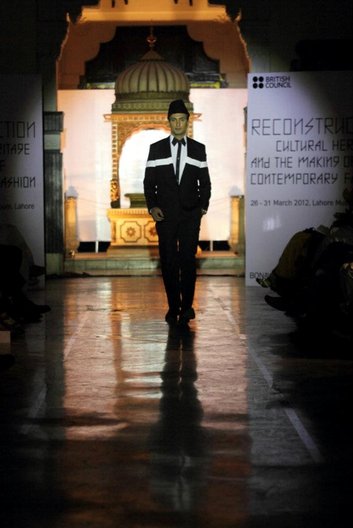 Fahad Hussayn catwalk show at the opening in Lahore 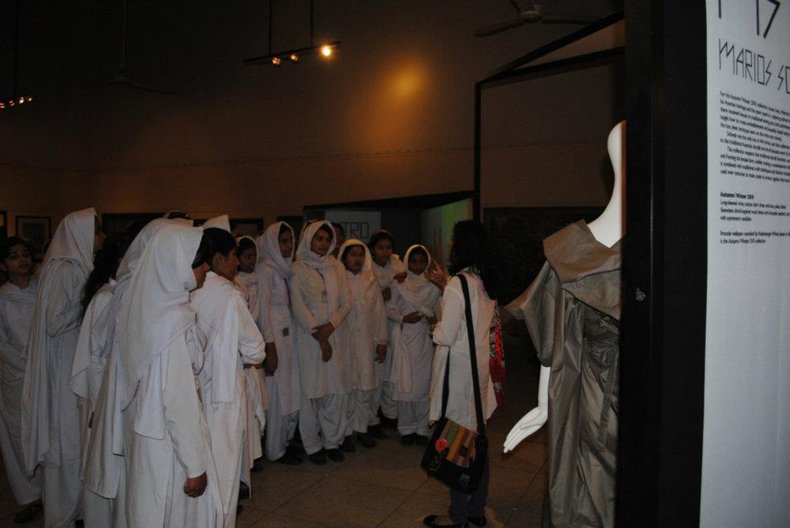 Lecture at the exhibition in Lahore 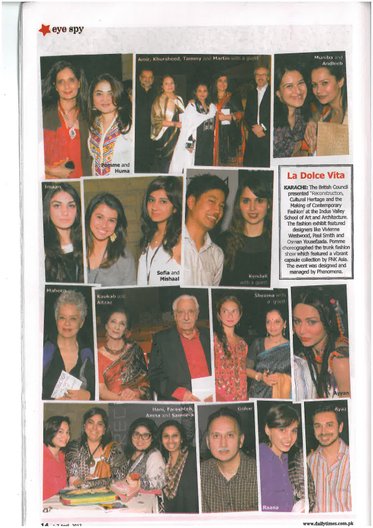 Me and Tet in the Sunday Daily Times! 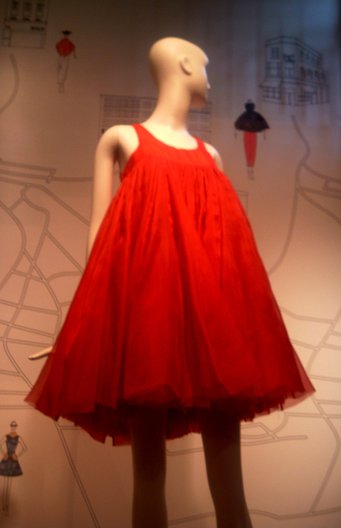 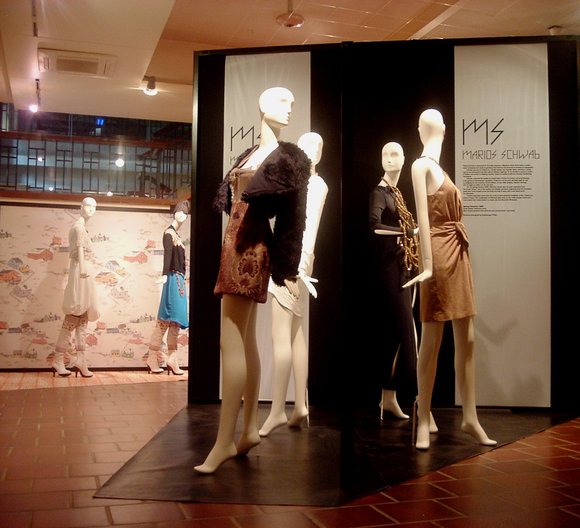 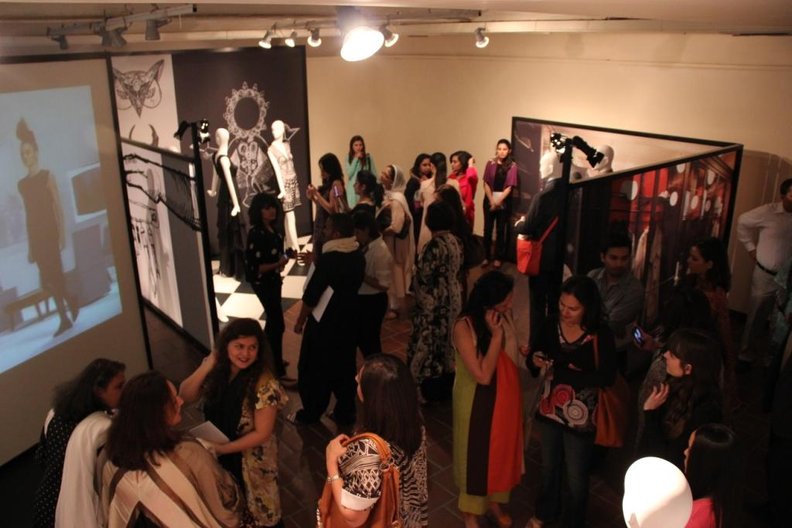 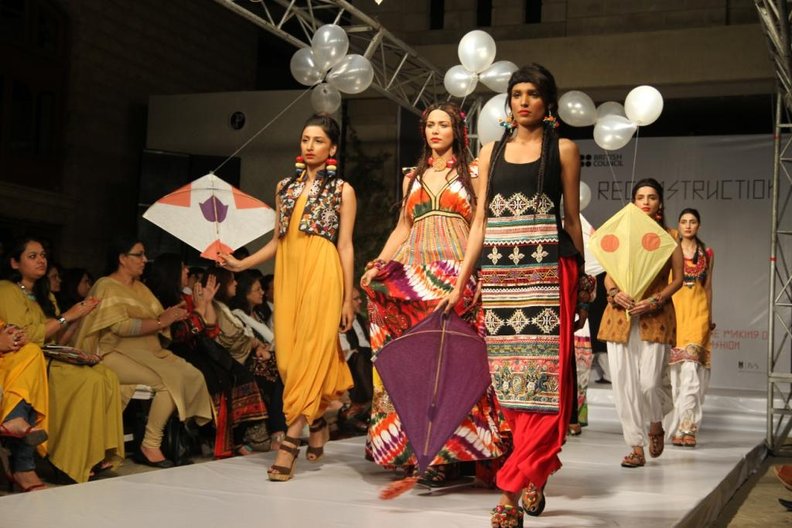 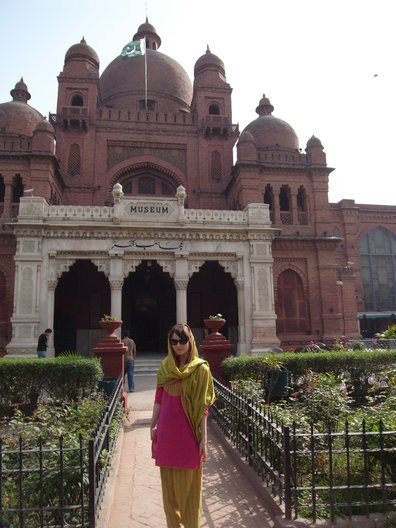 Me in front of the Lahore Museum 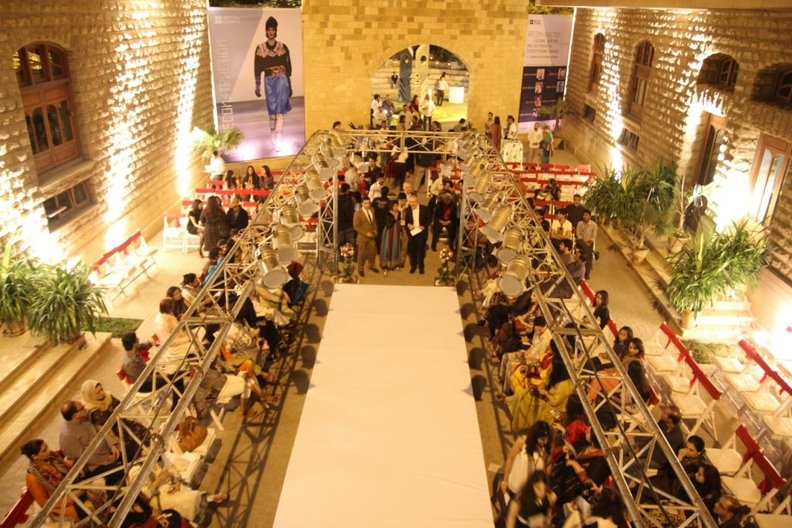 Preparing for the opening in Karachi 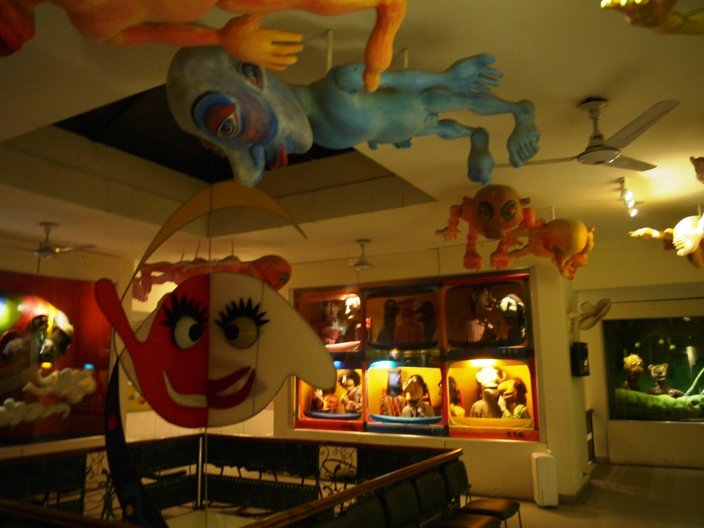 A view at the International Puppet Festival

As March has ended, so has Reconstruction: Cultural Heritage and the Making of Contemporary Fashion's journey through Pakistan.  Following the exhibition's conclusion at the Bangladesh National Musuem in Dhaka, it then travelled to Karachi to the Indus Valley School of Art and Architecture.

I don't know if any of you have ever been to the Indus Valley School of Art and Architecture, but I have to say it is certainly a setting condusive to creativity!  The exhibition was situated within their gallery and open was to students throughout the week.  Various lectures also took place within the exhibition, including one by me on fashion exhibitions and curation in the UK.  Tet Nagata from Nissen Richards Studio was there throughout the week and spoke with some architecture students on exhibition design and architecture education in the UK.

The opening event at IVSAA explored the theme of Reconstruction with a catwalk show by the Pakistani designer FNK ASIA, who mix contemporary fashion with traditional Pakistani techniques and textiles.  There was a great turn out and many interesting questions regarding the relevance of the exhibition in a country in which many women adhere to conservative Muslim dress.  Though it didn't seem to matter, because the students were interested in the concept of working their cultural heritage into their own design as well as the importance of a creative economy like fashion.  It was an opportunity for the two countries to learn about each other through the communicative medium of fashion as Reconstruction demonstrated.

Following its visit to Karachi the exhibition then moved to the Lahore Museum, which proved a very different setting.  The impressive Mughal-gothic styled institute was founded in 1865 under the reign of Queen Victoria and Prince Albert.  This provided for a wonderful parallel to the V&A's Fashion in Motion programme, when designs by Pakistani designer Fahad Hussayn were worn down a catwalk through the Museum's main galleries.  The exhibition itself found a home in the painting gallery, which featured everything from 19th century British paintings (including a portrait of the Museum's first Director, John Lockwood Kipling, Rudyard Kipling's father) to contemporary Pakistani paintings.  For this leg of the tour I was joined by Del Bond of Aldworth James & Bond to complete the installation.

Throughout the exhibition's run there were workshops and lectures involving students from the Beacon House National Unviersity, STEP Institute, the National College of Arts and the Pakistan Institute of Fashion.  Lectures applied the theme of Reconstruction and considered some traditional Pakistani crafts in the Museum, which I learned from students is not usually an approach they take to their designs.  They also looked at displaying culture through methods such as exhibitions and the relationship between fashion and politics.

Being in Pakistan it was amazing to see the colours and detailing on clothing and to learn about their Textile design based approach to fashion design.  Often, as happened before the 20th century in the UK, women will purchase fabrics and have a tailor create a special outfit to their specifications.  As a result, within their culture creativity is not just limited to professional designers.  I asked a colleague what she looked for in an outfit, and she said colour then comfort.  How refreshing! And I must admit, wearing my shalwar kameez to work every day in the Museum I felt both beautiful and comfortable.

There was also such an abudance of art activities while I was there - an international folk puppet festival and exhibition in Lahore, and a staging of La Cage aux Folles at the Arts Council and a music festival at the National Academy of Performing Arts in Karachi.  I hope Reconstruction inpsires young Pakistani designers to preserve their traditional crafts in their designs and serves as the start of a widening British Council arts programme in Pakistan, because we have so much to learn from each other.

Reconstruction showcases the work of 7 UK-based fashion designers, and the cultural references that influenced their design.  The exhibition has been curated by Alison Moloney, British Council London, and designed by Nissen Richards Studio. The graphic design was by studio Kellenberger-White, which developed a new typeface in response to the sharp, angular lines of the exhibition structure.

RECONSTRUCTION : setup in Karachi from NISSEN RICHARDS studio on Vimeo.