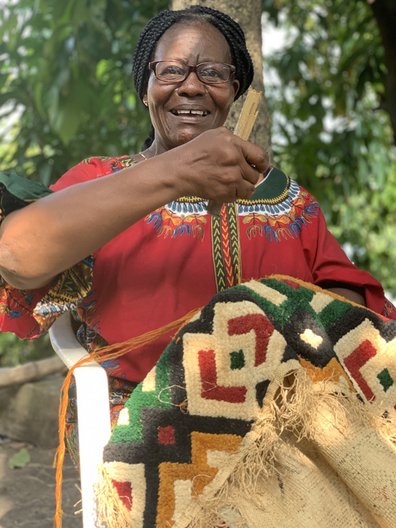 Monique LIHUA, a Kuba textile artisan, princess and part of the Atelier, weaving one of her own designs. 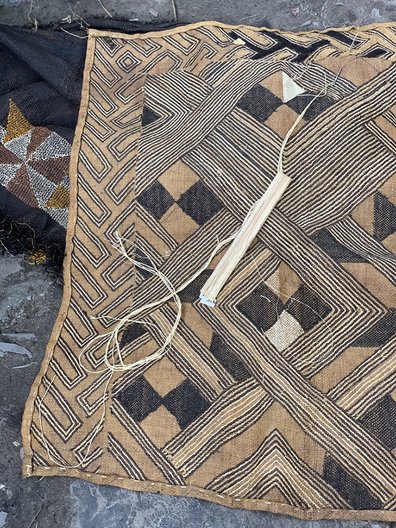 A rug prototype, experimenting with the combination of the classic line of Kuba designs with modernist drawings. 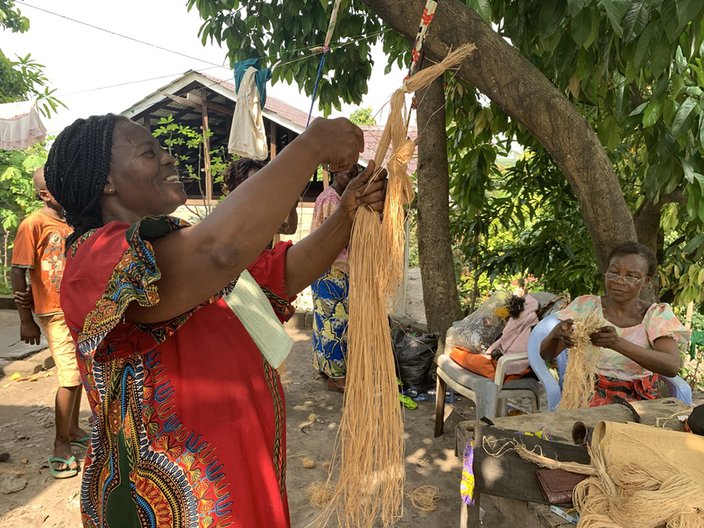 Female artisans in the frontyard of the Atelier in Masina, Kinshasa. Maman Monique is fixing a piece of raffia to be softened before weaving 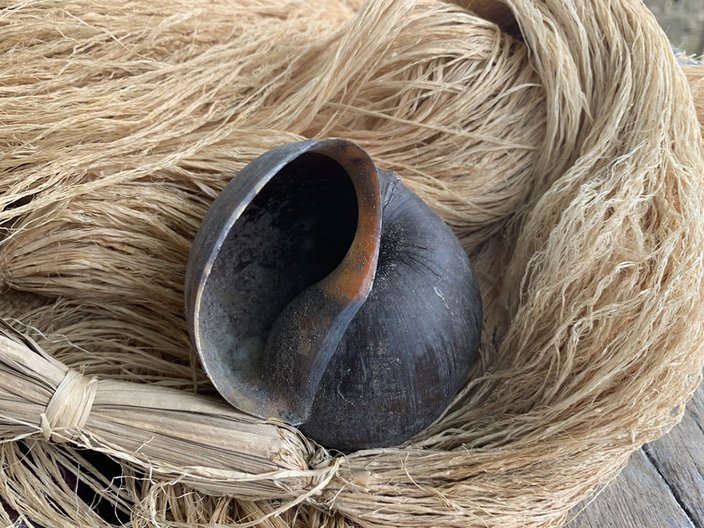 Snail shells are used in the traditional way to soften the raffia strings to make it easier to weave. 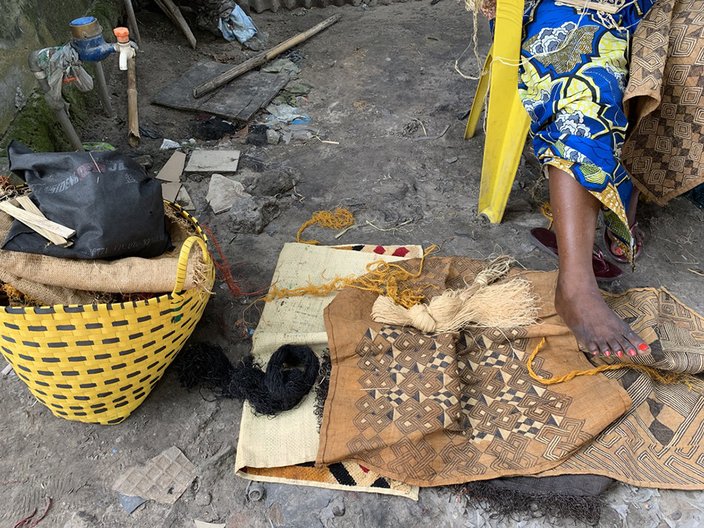 Kuba prototypes in the atelier. 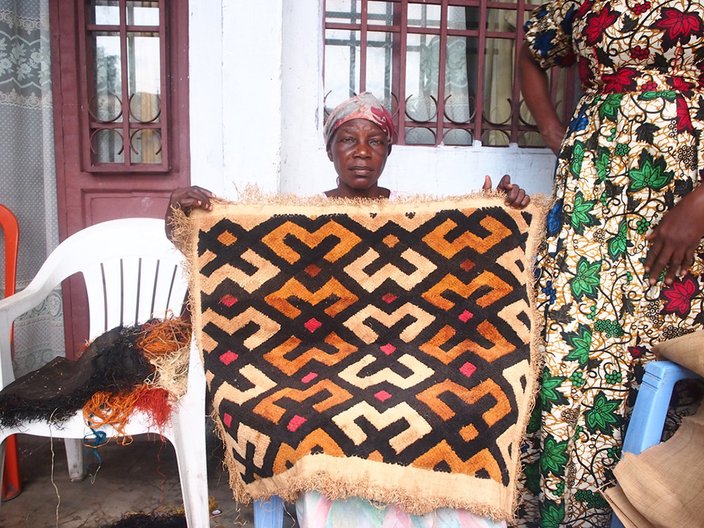 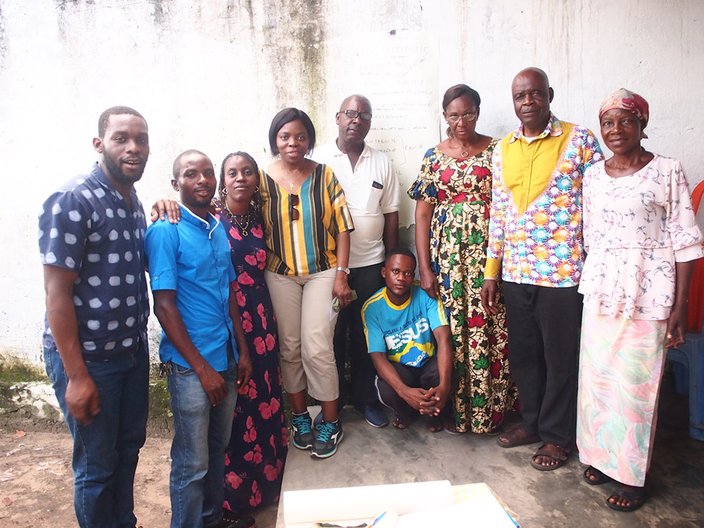 Jess Kilubu with members of the team. 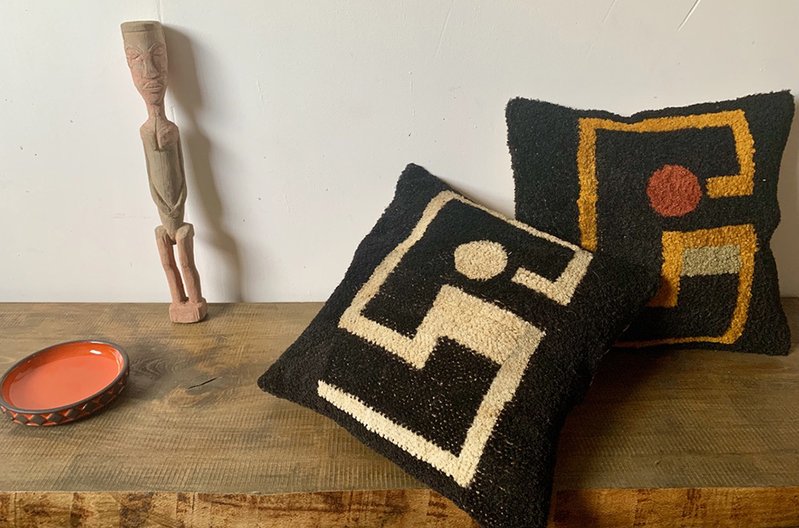 Mandombe cushions; the first products from the atelier collaboration 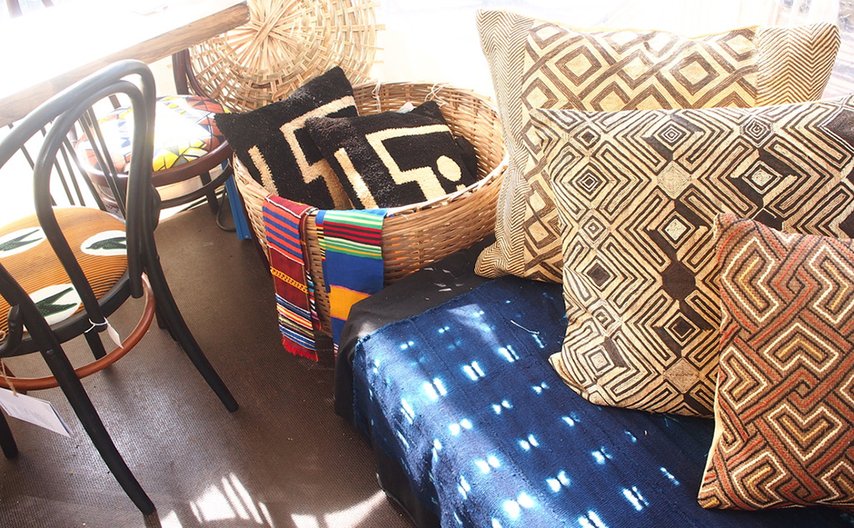 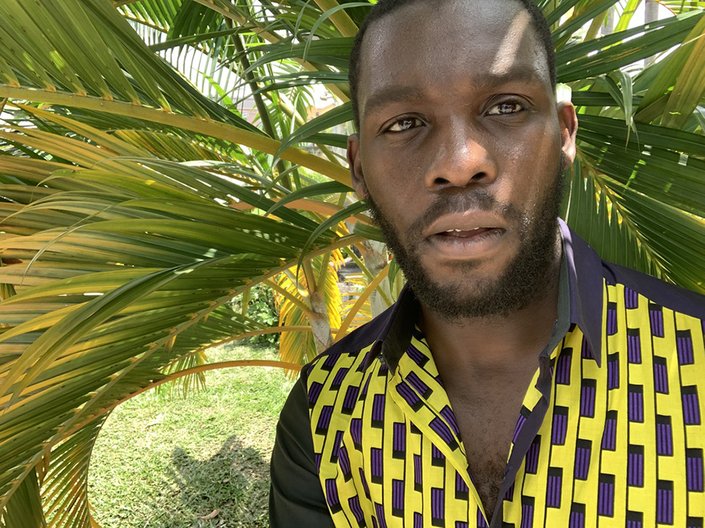 Designer Jess Kilubu was selected for one of our Crafting Futures grants in 2018. He travelled to the Democratic Republic of the Congo for his residency, where he explored the relationship between craft, language and identity. He tells us about his experience, research and what he discovered.

The Crafting Futures Grant is currently open for applications, anyone based in the UK who is interested in the future of craft can apply. Find out more here.

General elections were held in the Democratic Republic of the Congo on 30 December 2018 and the results only announced on 10 January 2019, in a country as big as Western Europe which did not have any peaceful transition of power since its independence in 1960.

I waited a few days before flying to make sure the security situation was stable and was lucky enough that the authorities restored telephone and internet connections the eve of my departure. Returning after six years, I went to ‘Kin La Belle’ to pilot my atelier as part of the Crafting Futures residencies; researching the impact culture and language has on products and on the way design, artisans and linguists can collaborate to make products. At large it was also about crafting our futures as designer-maker-linguists and putting the cultural aspect at the forefront of our collaborative designs made in Congo.

My research programme started by visiting the Bikeko market in the Gombe area of Kinshasa, it is the largest handicraft and art market in the DRC and I was astonished at the poor state of the infrastructure, leaving the work of craftsman and craftswomen at the mercy of tropical rains. I was also surprised at the discussions, engaging with the makers and dealers, all centred around pricing rather than the person who made it, the product or its signification, its history and details. It was striking that artisans in Kinshasa, and in the DRC in general are struggling to make a living, pressuring them to always sell at a discount, bringing down the quality and refraining people from making art and craft. I would quickly realise that this was the general theme of discussions throughout my pilot project on the ground.

I ended up spending a lot of time at the Académie des Beaux-Arts de Kinshasa, firstly meeting with Pr. Maxime Mabuidi Woto, wood sculptor, and Papa Donatien Kongo Maboshi both Kuba people and part of the future atelier. The Académie is a vestige of Belgian colonialism, consisting of a set of beautiful buildings, located in a luxuriant garden full of exotic trees and art from former students. However, walking inside classrooms and studios, talking with students and artists one quickly realises the school is scarce of resources and dilapidated, like most of the Congolese infrastructure dedicated to culture and art.

Kuba art and culture specialist, Maxime, strongly believes in the importance of the Kuba identity in the making of art and is energetically trying to support artisans from its native Kasaï in producing crafts and design objects. However, they are lacking the support of a modernised structure to target national or international markets. He has been looking for a long-term partner for a while, a partner to create and design using classic Kuba arts to make modernised objects. Throughout the two weeks we would have profound discussions about how identity can fuse craft and design practices.

Most of our work was done at Masina also named the Chine Populaire because the area was built by Chinese workers in the East part of Kinshasa. There I would meet with the rest of the team, mostly comprised of women led by the talented Kuba textile weaver Maman Pelengue and the six other female weavers during the workshop. We began our discussion by showing them the work of Annie Albers, which was being exhibited at the Tate Modern in London. The female members of the Kuba tribe are taught weaving at a very young age and were are a natural beneficiary of our project. If discussions became a bit difficult because of the language barrier - I speak French and Lingala - they would speak Tshiluba and we would work on the Mandombe script. The real magic happened when they started softening the raffia by repetitively sliding the fibre on the inside of the shell, they naturally started singing and talking at the same time. We could hear in their voices and see in their smiles how strongly their work was embodied in their identity, repeated many times in their lives – a strong way to connect with the community and be up to date with the news and gossips.

At the beginning the meetings with the CENA, also a partner of the project, I had to work with the structure and the rigidity of the organisation. The CENA is part of the Kimbangist Church, therefore, I had to meet their heads to get their formal approval. Equipped with an invitation letter from their sister entity in Paris I arrived at the University Simon Kimbangu in the Kalamu area. The building faces the Kalamu river filled with trash and plastic waste. A gentle reminder of the huge challenge around waste management the country is facing, but, in a city where all that can be re-used is re-purposed or re-cycled, I also thought about the handcraft and future design answers the atelier could provide by transforming this waste into products. The reception of the Mandombe as a script was extremely positive, most of the people we discussed the project with did not know about it and were supportive of our initiative wishing for this script to be taught at school so young kids would be able to use it. This clearly met with the CENA’s objective to communicate about this script to a wider population.

I completed my observation by visiting the Ministry of Culture, starting by paying the ‘art tax’ is an obligatory step for anyone wishing to take any art or craft object out of the country. My intention was also to discuss the state of culture and the government project with some officials. The ministry has the lowest budget of all departments and for many years now culture has not been identified as a potential lever to accelerate the country's development; explaining the disregarded status of crafts and design in a country which value singers and musicians as the cultural elite.

I remember Kinshasa as being a difficult city, where everything takes a lot of time; negotiating or bribing the authorities for every move. A country with hardly any formal economy and no welfare state; most of the people try to get by with one meal a day by farming, trading, smuggling or hustling - the best ways to fend for yourself and your family. The pilot was an amazing experience and we all were impressed by how much we could achieve in this short amount of time. It was an excellent introduction to a longer term and more sustainable project.

Hear Jess speak about his project in our Disegno podcast series, The Residency.

Discover more about Jess' design practice on Facebook, and find out more about our Crafting Futures programme here.

Location
Democratic Republic of the Congo