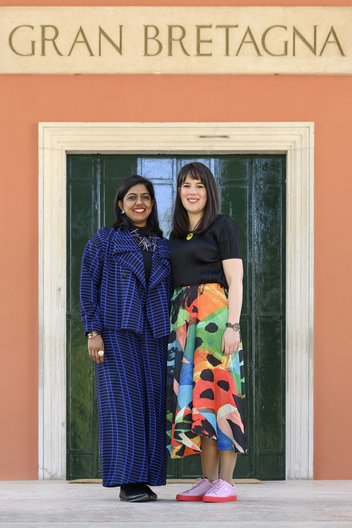 Following an open call for proposals, curators Manijeh Verghese and Madeleine Kessler have been selected to represent the UK at the 17th International Architecture Exhibition at la Biennale di Venezia.

Inspired by Hieronymus Bosch's The Garden of Earthly Delights, the winning project looks at how spaces such as the British High Street and the Playground are under threat from increasing privatisation. The exhibition will engage in the current debate around ownership and access to what we perceive as public space. The curators will transform the British Pavilion into a series of immersive spaces, commissioned from leading researchers and practitioners, presenting both a critique of how they are currently used while providing strategies to increase people's agency over their public spaces.

"We are delighted to be selected as curators of the British Pavilion for la Biennale di Venezia 2021. The British Council commission offers a unique platform for research about public space to be collected, tested and disseminated in order to increase public agency across the UK and beyond. We will be working with an experienced team of architects and designers who are at the forefront of research and practise on this subject. In collaboration with our partners Museum of Architecture and the Saturday Club Trust, we hope to widen access not only to the Biennale but also to who participates in the discussion around privatised public space.  It is our hope that through the research, design and legacy of the project, we can begin to imagine all public spaces as Gardens of Delight."

“The British Council is thrilled to be able to announce Manijeh Verghese and Madeleine Kessler as curators of the British Pavilion at la Biennale de Venezia 2021. The competition generated a diverse field of applications which revealed the urgent challenges facing British architecture today - I want to take this opportunity to thank everyone who participated. The British Pavilion presents a unique opportunity to reach an international audience on the world’s most prestigious platform for architecture. The Garden of Privatised Delights will generate a new body of research which will engage in this international debate, while creating strategies to create more inclusive and accessible cities.”

This year, the British Council also shares details of eight other projects that were shortlisted for the commission. They are:

Synopsis: BOT is a fully automated platform that curates, creates, produces and distributes its own content. BOT informs and brings the public an awareness of, how the digital economy and automation are increasingly affecting our built environment. In particular, BOT is interested in looking at the increased financialisation of space, its effects on architectural production, the interaction between both human and non-human labour and how to provide opportunities for the public to better engage with the processes of how we produce space.

Synopsis: 8,000 miles away from the edges of Britain, 300 miles from Argentina, the landscapes and textures of the Falkland Islands remain untouched since the 1982 war. This is an exhibition about invisibility through illuminated hypervisibility, and the fractal-like relationship between history, memory and the act of remembrance of war and territory as well the role of monuments and rituals; spaces and non-spaces, in forming post-colonial national identities.

Title: The Gran Bretagna or The Definite Article

Synopsis: The Gran Bretagna sees the British Pavilion transformed into a fully-functional public house, drawing on a contemporary British practice of transposing buildings with former lives into pubs with an explicitly popular aesthetic. Including loans of objects from national museums and new commissions from contemporary artists and Apparata, the pavilion will at once become a working pub, a fabrication and the site of a much-needed conversation about the politics of place, space and country.

Synopsis: A twenty-first century home is not a machine for living in, but a rich experimental space linking interior to exterior ecologies of living systems while creating new values for community empowerment and environmental stewardship. We propose to transform the British Pavilion into a living home, with each room in the home a distinct world shaped by pioneering scientific developments in channeling elemental fabrics – earth, water, light, air – creating a new toolbox for twenty-first century architects.

Title: A House for Britain

Synopsis: A House for Britain is a call for British architecture to be more inclusive towards a diversifying world. It articulates this by playing off the idea of the British country house, a form that allows us to grapple with British identity and the cult of the house within it. Through inter-disciplinary commissions that celebrate diversity embedded in an immersive experience, our proposal subverts the country house's traditional connotations of British refinement and projects onto it new, more plural, forms of identity.

Synopsis: Land of Exceptional Qualities proposes an immersive, fantastical landscape of rejected architectural ideas, dedicated to the aesthetic ambitions that failed to receive planning approval in the UK. Questions of aesthetics and taste are among the thorniest issues in architectural discourse in the UK today. This proposal would open up the question of whose taste and aesthetics are being protected, using the lens of failure – rarely discussed in the profession - to celebrate and learn from our lost schemes, and in doing so confront the latent tensions inherent in planning the built environment.

Synopsis: Whether by choice or otherwise, artists are both incredibly resourceful in the face of financial constraints, and creative in terms of finding spatial solutions for living together. The proposal entails the presentation and analysis of a selection of upcoming artist housing case study projects - both top down and bottom up – from which we extract the spatial, social, economic and legislative innovations that are brought together in a charter for other sectors also affected by the housing crisis.

Synopsis: Through an act of experimentation, this proposal explores how the conditions of designing within a rural framework – one that preserves and progresses simultaneously – can be a means to generate new form and influence sustainable practice, transcending the urban and rural divide.