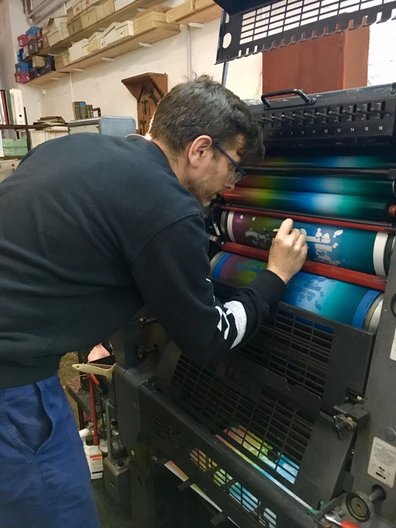 The fourth edition of the Dhaka Art Summit (DAS), one of South Asia's main visual art, architecture and design festivals, will be held between 2 and 10 February 2018. The British Council has collaborated with DAS as part of their inaugural Education Pavilion.

The inaugural Education Pavilion at Dhaka Art Summit places learning at the centre of their programme to nurture and challenge the next generation of artists and architects in Bangladesh. These workshops are free and open to local participants who pre-register in January 2018.

In collaboration with the British Council through one of ADF's Biennales and Festivals grants, Dhaka Art Summit has developed a graphic design programme to be led by UK graphic designer Fraser Muggeridge. Fraser will run 3 short one day workshops that explore the foundations of graphic design: Text, Image, and Print.

Text: A collaborative photocopy workshop where a letter is repeatedly enlarged to set the world record for the World’s Largest Enlarged Benglai Letter.

Image: An exercise within the constraints of 2-D reproduction to create manual variations of a given graphic form.

Print: How can an image or design be created without a predetermined idea of what that might be? This workshop held at a local offset litho printer will focus on image making through experiments with a commercial print process both on the printing plate, and on press itself.

These workshops are suitable for those interested in graphic design, typography, print making, and process based art practices.

Fraser Muggeridge is an award winning graphic designer from London. He has worked with significant artists such as Jeremy Deller, Fiona Banner and Metronomy to produce work that is typographically lead and typographically exciting. In 2014 he created “Mimeographica Alphabetica” at the Whitechapel Art Gallery in London, which re-invented the alphabet through abstract stencil forms and manual printing machines. He lectures throughout the world and runs Typography Summer School in London and New York.

The Dhaka Art Summit (DAS) is an international, non-commercial research and exhibition platform for art and architecture related to South Asia. With a core focus on Bangladesh, DAS re-examines how we think about these forms of art in both a regional and an international context. Founded in 2012 by the Samdani Art Foundation—who continue to produce the festival—in collaboration with the Ministry of Cultural Affairs, People’s Republic of Bangladesh, DAS is hosted every two years at the Bangladesh Shilpakala Academy.

For detailed programme information visit the DAS website. To register for the workshops visit the Education Pavilion website.