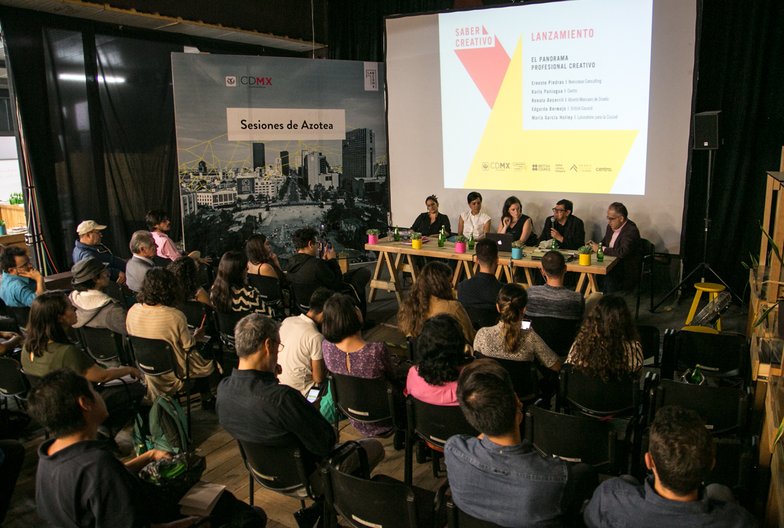 According to different studies, the interest for the creative industries in Mexico City is on the increase. Last year, 12% of bachelor students in the city were enrolled in programmes related to the arts and humanities. Nevertheless, contrary to popular belief, creative industries not only generate cultural richness, but they also contribute actively to the nation’s economy, accounting for nearly 7% of the annual GDP. That’s the reason why it is important to train makers to build enterprise skills and tools required to contribute to this growth.

As María García Holley – who is part of the creative projects department at Laboratorio para la Ciudad and the Maker Librarian for the Maker Library hosted there – tells us, this project, Saber Creativo (Creative Knowledge), emerges to address the considerable gap between the moment when students of creative disciplines finish their academic education and the moment when they try to join the creative labour market. After finishing university, students aren’t really prepared to face the challenges that become a maker, or in some ways even acquire the skills and knowledge needed to develop a sustainable business based on creative practices, in addition to the fact that the city does not offer enough tools or support to address these needs.

Saber Creativo aims to close this gap: it is a free training programme that consists of 12 seminars that will be taught during the months of June, July and August 2016 in the rooftop of Laboratorio para la Ciudad. These will be led by experts in the fields of accounting, project development, finance, economy and copyright, among others. It isn’t an academic programme, but rather a space where good practices and methodologies will be shared, advice will be offered and encounters generated. Generating a space where makers will not only meet other makers but learn how to create value and ultimately live from what they make.

The origins of the project go back to UKMX215, the Dual Year of the UK and Mexico, when the first Maker Library in Mexico was established as the result of a collaboration between Laboratorio para la Ciudad, Abierto Mexicano de Diseño and the British Council. Saber Creativo draws from the Maker Library's core aim of sharing knowledge and opening doors to the creative communities.

This programme has only been made possible with the support from the partners mentioned above, but also through a collaboration with CENTRO – a higher education institution in the fields of design, communications, film, digital media and architecture – and the economist Ernesto Piedras, who has been studying themes related to economy and creativity for over 20 years and who leads the consultancy agency Nomismae Consulting, that specialises in the analysis and measurement of the economic contribution of creative activities and culture. Finally, also thanks to 15 professors that donated their time to the creative agents of the city.

Since the launch of the open call, the project has generated great interest among Mexico City's creative community, with 528 applications being received over 5 days, confirming the hypothesis that the Maker community and the creative agents of the City feel the need for programmes such as this.

As Edgardo Bermejo – Director Arts, British Council Mexico – mentioned, the UK has been a pioneer in identifying the creative industry as an industry that creates wealth. Through this sort of initiative, we aim to continue fostering the development of creative agents and of successful creative projects that enrich the cultural and working life as well as the economy of Mexico and the UK.

BACK TO MAKER LIBRARY NETWORK