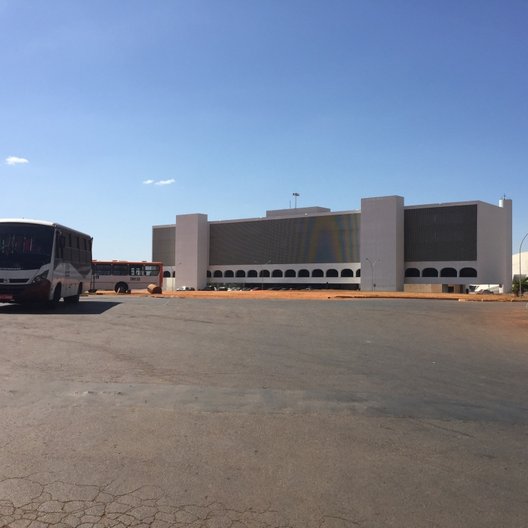 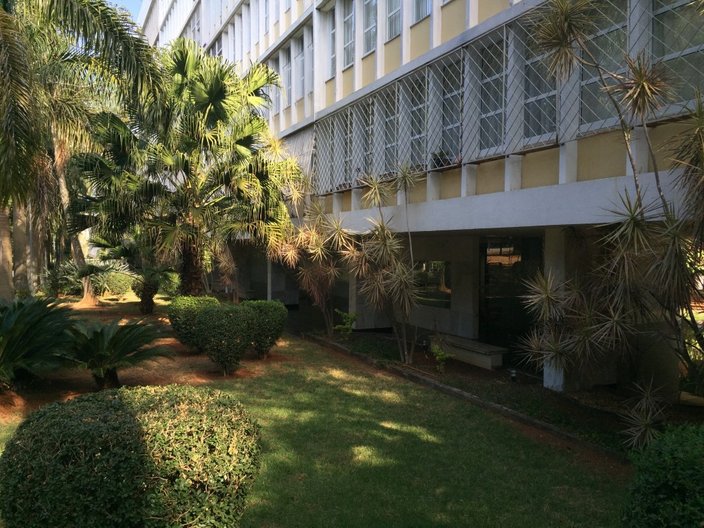 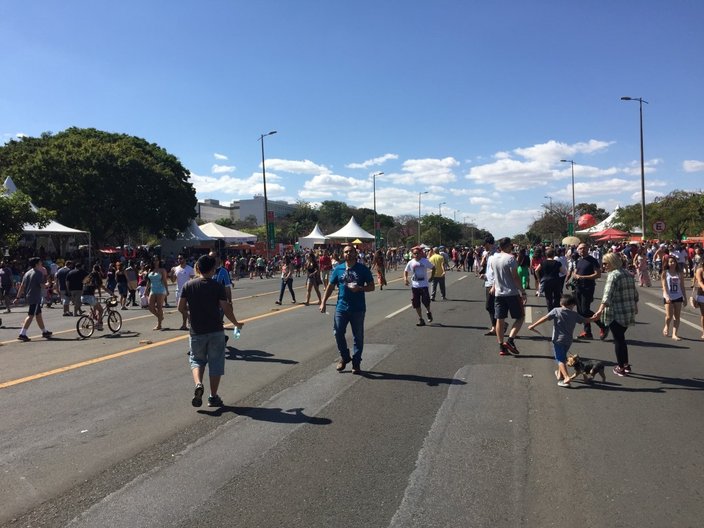 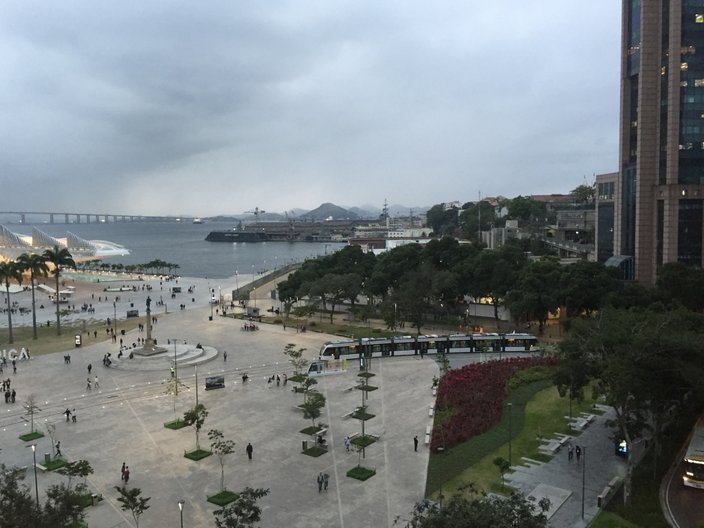 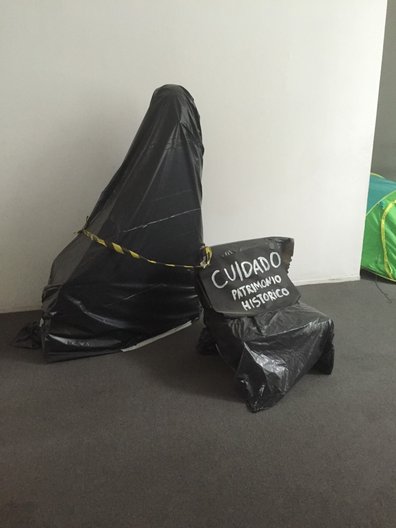 In their second blog post from Brazil, Valerio Di Lucente, Hugo Timm and Erwan Lhuissier, the three members of multidisciplinary design studio Julia, explore the impact of Modernism in Brasilia and its reverberations today, and recent developments in Rio de Janeiro in the lead-up to the Olympics next month.

At the end of the 1950s, Lina Bo Bardi wrote in Habitat some of her concerns regarding the building of a new national capital, Brasília. We headed there to see what became of Lucio Costa’s plan, and to see how Brasília evolved as a place for living. The first thing to strike us was the monumentality of the buildings and their contrast with vast empty spaces, which we later learned from Prof Frederico de Holanda are tightly controlled to remain empty. The monuments form something akin to an ancient temple, a place aspiring to be more than human.

The following day we went for a long walk around the South Wing’s Superquadras (superblocks). There, it is almost impossible to relate to the monumental centre. Everything is in human scale, the buildings are in a gentle juxtaposition of styles but always respecting fundamental rules. There are squares, schools, shops and plenty of green providing shade from the scorching sun. It’s pleasant, quiet and bucolic, but it is also where a very small portion of the population lives.

Trying to visit the administrative offices and palaces we were treated to a small procession of refusals. Buildings closed, squares fenced off, access denied. It reminded us we are in a country where things are bubbling under the surface, something we only felt before by seeing the plethora of Fora! (Out!) graffiti on the streets of every city we go (“Out”, either for Temer or Dilma, the acting and the former Brazilian presidents).

On Sundays Brasília closes its main road, Exio Monumental (Monumental Axis) a multi-lane expressway, for pedestrians. There isn’t any business facing the road, so it becomes a park in every sense of the word. Children, cyclists, families lounging on the grass of the roundabouts, dogs being walked, food stalls, and a whole lot of life bursts out in the open. Like São Paulo and its Minhocão, there’s a desire to take over spaces and make them public, even if asphalt. It’s also a reminder of Lina’s words that the real judges of Brasília’s success will be the people living there, and the ones we met seemed very fond of their city. Here we met lovely, energetic people that really added something special to our stay.

We arrived in Rio as the sun was setting, and as we made our way to its beaches we saw people drinking at little kiosks, live music, kids playing on the beach and the famous Burle Marx sidewalk to accompany us. In our travel so far, Rio is the first place in Brazil that seems what, in ignorance, you think it will be a glossy postcard. Leaving the beaches behind us and walking through the city, contrasts appear harsher than anywhere else, monumental nature against wild urbanism, old and new architecture surrounded by social divide. As a backdrop to our walks, the frenetic hammering and drilling of a last minute dash for the Olympic games, constantly reminding us the particular moment the city is going through.

In our second passage through São Paulo we had the chance of discussing with Marcelo Suzuki his personal impressions about Lina's interest in popular culture. He helped us understand the sophistication of her approach, which was not a romantic quest for precariousness or an homage to poverty. She was interested in skills, solutions, utilitarian objects of refined execution. A few days later, in Rio de Janeiro, we got another insight into this by visiting the Origem Vegetal exhibition at CRAB, a new centre dedicated to Brazilian crafts in downtown Rio. It displays beautifully made objects from different communities in Brazil, from indigenous to established designers, and some interesting collaborations between them. It was a great example of living culture, new ways of making deeply rooted in regional traditions.

Rio de Janeiro's Escola Superior de Desenho Industrical, or ESDI, is known as the first industrial design school in Latin America. It is the offspring of the city's Museu de Arte Moderna-MAM (Modern Art Museum), in a similar model to Lina's efforts in establishing schools at Solar do Unhão at MAM Bahia, Masp (São Paulo), and Parque Lage in Rio. In our visit to ESDI we saw an institution looking to update itself against an increasingly difficult political moment. Director Zoy Anastassakis talked us through the job of managing this historical place with inspiring enthusiasm, despite a strike now running for 4 months. ESDI is traditionally based in the Ulm school, and it was interesting to discuss Brazil's relationship to its own design history, which is not widely taught at universities.

After seeing and hearing so much about Brazil's current complicated political situation, it's great to see new initiatives springing up. In Rio we paid a visit to Saracura, a new space for artists and designers to engage, collaborate, produce and exhibit. They kindly walked us through the redeveloped Porto Maravilha, telling stories of Rio's central and harbour areas now being regenerated in time for the Olympics. Featuring heavy traffic, colonial houses, modernist offices, memorials to urban violence, shiny new museums, and back alleys that serve as refuge to drug users, the walk was Rio condensed into an overlay of urban tensions.

As her ship approached Rio de Janeiro, Lina Bo Bardi saw MEC, the Ministry of Education and Health building which she later wrote of as a welcoming sign for new possibilities. We visited the same building seventy years later, now housing offices for the Ministry of Culture in Rio and the associated FUNARTE, only to discover that it is undergoing renovation. The rebuilding in progress was far from being only architectural, the lower floors currently occupied by a group of activists opposed to the Brazil's current interim government. As we visited the ocupação we entered rooms of a surreal co-habitation, a functioning government building with civil servants and activists sharing lifts. Synthetic tents under Portinari murals depicting Brazilian workers in what was once a cocktail reception lounge. Statues covered in plastic created huge volumes of black within the rooms. Cleaning staff calmly sweeping dust. Visiting the building left us wondering what are the possibilities now.