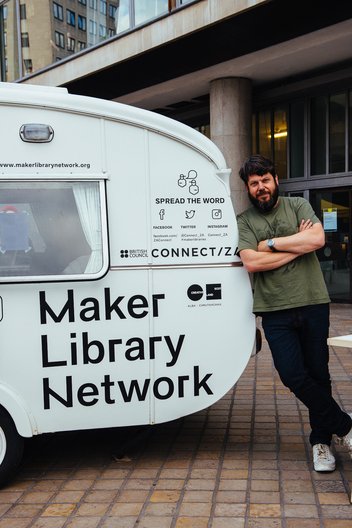 The Maker Library Network is one year old. So we are taking this occasion to reflect and celebrate all that has happened since the exciting launch of the programme in Cape Town last February when, powered by the inspiring British Council Connect ZA, we set out to create a collaborative, creative peer-learning platform.

Initially, the Maker Libraries were mostly about specialists meeting each other. We started by opening small local hubs and connecting them to others in order to share skills and embark on collaborations. But increasingly we’ve followed the Maker Librarians drive to engage also in widely open public events. This included major festivals where they shared their enthusiasm for making, reading books and showing other people’s work.

The people involved have been a diverse and dynamic group, which, so far, has included artists, engineers, architects, curators, creative technologists, librarians, fashion designers, product designers and curators. Each brings to the party their special interest that comes out through the books they add to the library, the projects they run in their spaces and the exhibitors they choose to showcase. The Bibliography, which started with 20 core reference and inspiration books given to each Maker Library, now includes over 50 additional books forming a shared reading list. Selected by the Maker Librarians, the books range from Aquaponics to Bare Foot Architects, and from writing by Victor Papanek to The Art of Tinkering, including the odd French Empire Style guidebook. (You can go online to see who added that one).

Undoubtedly, the most exciting aspect of the network so far has been the strong bond between creative practice and social engagement. The collaborations strongly showcase the diversity of knowhow and shared values. The results go far beyond the exchange of technical knowledge to become valuable creation of shared culture. It’s been particularly interesting to see how sharing practice has moved on to sharing process and even sharing products.

Shared practice after all is the basis of peer-learning, and it takes confidence and an open mind to share your knowledge and skills - in other words your lifeline as a maker - with other professionals. By organising ‘Show and Tell’ and ‘Skill Sharing’ sessions and publishing freely available ‘How-To’s online, the Maker Librarians have done just that. By opening up the doors of their studios, and hosting successful public events and workshops they have shared process; teaching and learning skills as they went along.

Last but not least, they have worked collaboratively on joint outputs. This most experimental and innovative endeavour has played an important role in bridging the gaps between practices. To mention two examples: the longest project, started at Indaba Design Expo last year is the on-going Aquaponics prototyping between Makerversity, Thingking and FARMshop. More recently a collaboration around an Artlink community project involved MAKLab and GRAS studio.

There are now over a dozen Maker Libraries including in Johannesburg, Durban, Cape Town, Glasgow, Edinburgh and London and with a recent pilot in Lodz, Poland heralding plans for new regions in Europe, Africa and in America. Our hope for the future is that a scalable sustainable model will deliver diversity and reach while retaining its original social-cultural agenda and the personal character of each one. We especially look forward to learning how to be part of the future of ‘real’ libraries.

Before all that happens we are taking the opportunity of the year mark to bring together for the first time a showcase of the Maker Library Network at Cape Town’s Maker Library: 75 Harrington. It will include individual and collaborative projects and is also a rare chance for people who have been Skyping, emailing, prototyping, filming, phoning and hanging out online to meet in person and make in the same physical space.

This showcase brought to life by the Connect/ZA and Architecture Design and Fashion team is an invitation to be part of the energy, talent, and vision of the Maker Library Network. Here’s hoping that it can continue to contribute to the social and cultural growth of young creatives the world round.