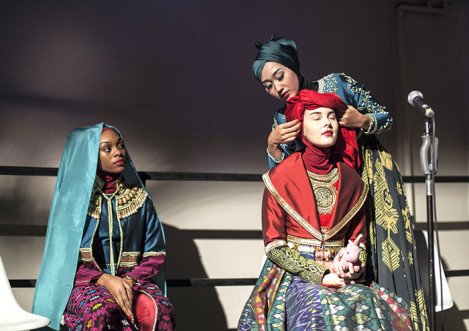 Having just returned from New York’s Couture Fashion Week, Indonesia Fashion Forward designer Dian Pelangi continued her globe-trotting travels to London from 22 February – 10 March 2015. Dian was invited to undertake a residency with London College of Fashion, participating in the activities throughout London Fashion Week and working with LCF students on a special project.

On 24 February 2015, Dian lead a Hijab Styling Workshop at the British Council and British Fashion Council's annual International Fashion Showcase in Brewer Street Car Park, London. The event was attended by up to 100 people from various different backgrounds; from fashion practitioners, hijab communities, government officials to international guests. In this event that was hosted by Professor Reina Lewis from London College of Fashion, Dian gave a tutorial on three signature hijab styles, including one special style that was demonstrated on a lucky audience in attendance.

Dian was then a special guest for an academic discussion on 26 February 2015 about ‘What International means for Fashion’ attended by academics from the London College of Fashion and moderated by Professor Reina Lewis.  During the weekend, Dian organised a gathering at Sable D’Or Café with the London based Hijab community and beauty, fashion and lifestyle bloggers.

On 2 March 2015 Dian presented a special showcase for students at London College of Fashion, presenting about Indonesia’s fashion industry, modest wear fashion and a mini trunk show showcasing her latest collection that was also previously presented in New York.

From 3 March onwards Dian worked together with students from the 3rd and 4th year BA Textiles and BA Womenswear course. Students were encouraged to participate in a competition to design a collection inspired by Dian Pelangi – where the selected 2 designers will win a chance to partake in an exchange programme at the Dian Pelangi headquarters in Pekalongan, Indonesia.

Taking part in the summer, the exchange programme will be an exciting opportunity for fresh graduates and young designers to have first-hand experience working in an international fashion label, learning craftsmanship skills that make the Dian Pelangi brand unique and immersing themselves in the local Javanese culture in the UNESCO Creative City of Pekalongan.

The winners will also have a chance to showcase their designs developed during the exchange programme on the runway of Jakarta Fashion Week in October 2015.