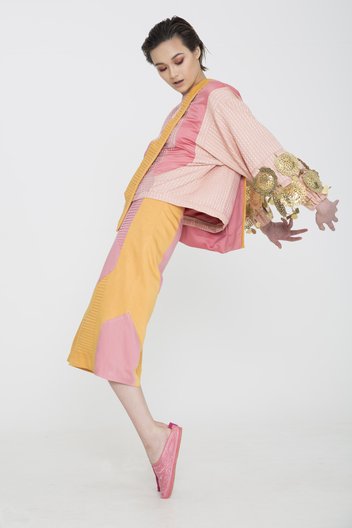 The British Council Inaugural International Scholarship Award, which will change host country every year, includes a funded international, month long residency and a grant to produce a capsule collection inspired by the trip. This year the host country was Morocco. The winner was judged on the quality of their work, the relevance of their practice to the residency and their awareness of the importance of cultural heritage and relations in fashion. Judges included the Graduate Fashion Week Executive Board, Joseph Ouechen of the Moroccan Association of Fashion Designers and the British Council's Architecture, Design and Fashion team.

Emerging Designer Holly Jayne Smith travelled to Casablanca from 26th October - 23rd November 2014, where she was hosted by the Moroccan Association of Fashion Designers and the Casa Moda Academy. Holly spent time immersing herself in Moroccan culture whilst interacting with its fashion industry; meeting Designers, Photographers and visiting Publications.

“During my time in Morocco, my most interesting and inspiring observation
was the friction between traditional and contemporary life. There's a strong,
almost unbreakable sense of culture and tradition, but there's also the
influence of modern globalisation and Western ideals, and that creates a
tension between the two. This was my concept and way of thinking behind
the collection”

Holly’s six look capsule collection has a strong combination of loose-fitted tailoring and sportswear. For some pieces, Holly was directly influenced by men's street style, and designed oversized polo t-shirts, popper pants and batwing tops. Intricate panelling, cut-outs and light-hearted details are combined with a free use of intense yet harmonious colour palettes to create her signature aesthetic and extremely honest portrayal of her experiences. During the residency, Holly commissioned an artisan from Fez to handcraft 120 large golden charms that are sewn into garments with contemporary silhouettes. These elements represent the traditional and contemporary ideas that the designer aimed to communicate.

On the 24th February Holly will have a presentation at the International Fashion showcase alongside a live discussion about her experience working overseas, her perceptions of the Moroccan fashion scene and the importance of cultural exchange in design in conversation with Martyn Roberts, Director of Graduate Fashion Week.

Models will be provided courtesy of Maroon London