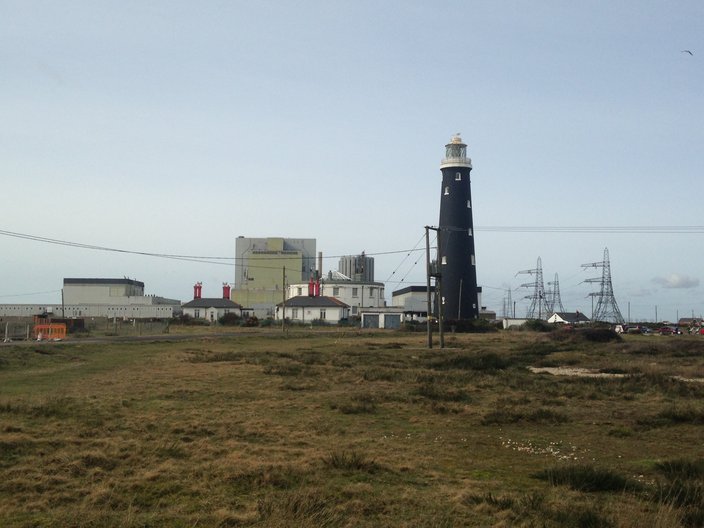 Dungeness and its famous power station 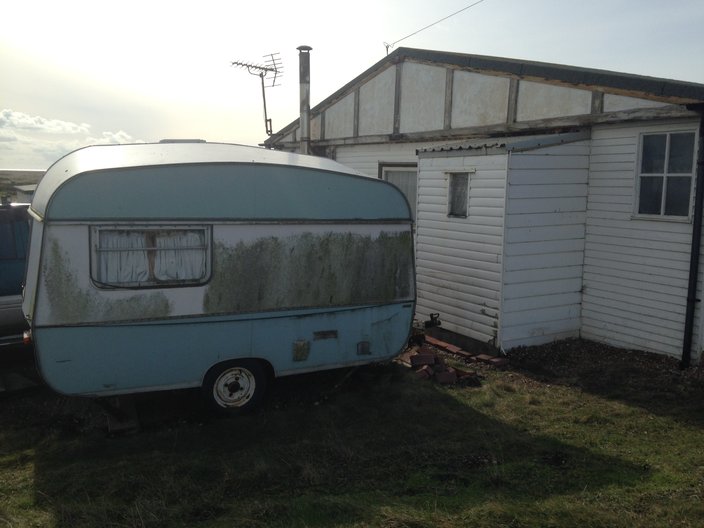 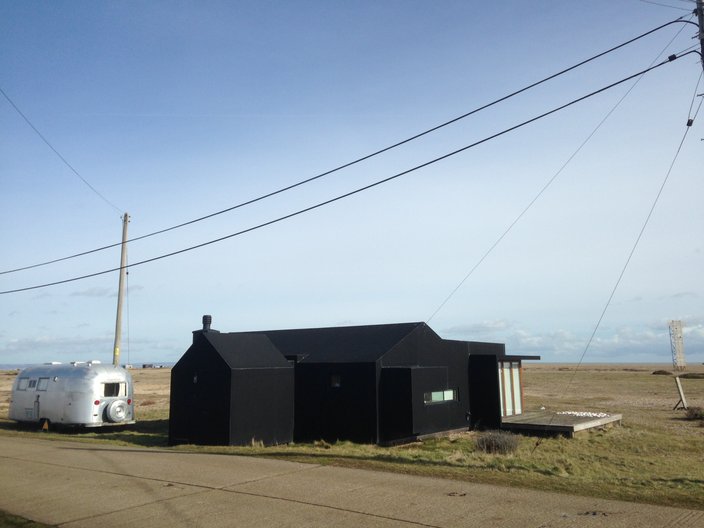 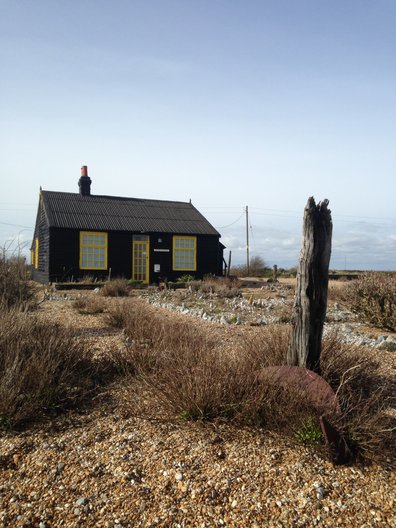 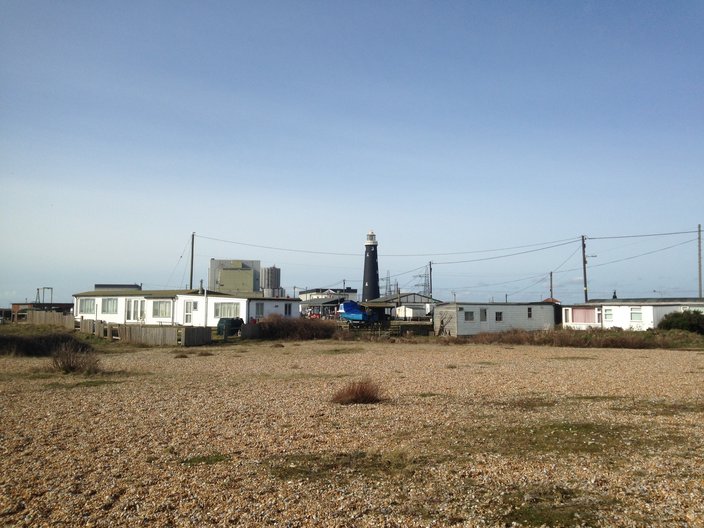 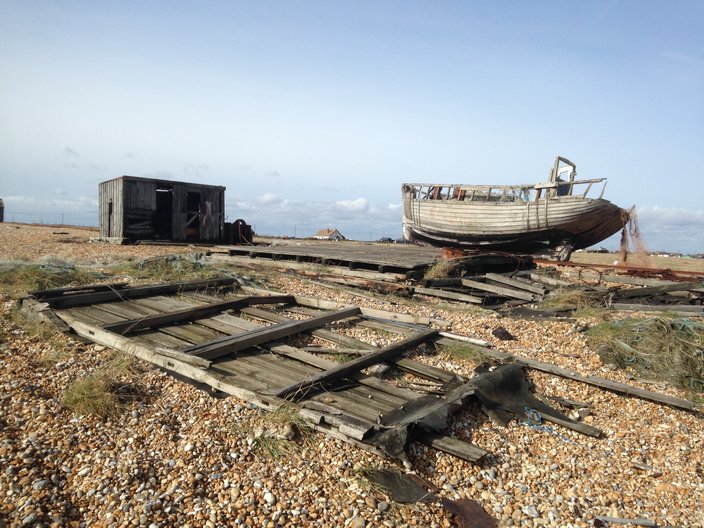 Joel Mills, Senior Music Adviser at the British Council, reports on the surreal landscapes around Dungeness following a recent visit to the Kent coast - including 'Britain's only desert', unusual self-build dwellings, 'picturesque' Camber Sands and, of course, the eerily iconic Dungeness power station itself:

Dungeness is breathtakingly bleak, a true English landscape quirk. It has an end-of-the-earth atmosphere, and yet enduring appeal and allure. As a place it has attracted various communities of people, from working class fisherman and rail workers, shifting over time to the middle classes and artists seeking inspiration and space. A vast nature reserve on the furthest reach of Romney Marshes, it's formed of a 12 square mile headland,  jutting 3 miles into the English Channel, and is a site of special scientific interest.

The Romney Marshes set the scene on the day I visit. They look like they have been squashed flat and compressed by the sheer expanse, weight, and greyness of a winter sky. With some of its land below sea level, this scrubby doesn't-look-good-for-much land should have been rightfully reclaimed by the sea decades, perhaps even centuries ago. Were it not for the Romans’ enduring sea defences to protect their nearby ports, much of the land here would now be underwater. Edging eastwards from the genteel, twee Cinque Port of Rye  through Camber Sands, towards Lydd, the patchwork of mostly low, new built brick housing and buildings highlight the contrasts in living style, taste, and class along the East Sussex and Kent borders. The road runs past Pontin's Holiday Camp, and another wintered, weary looking caravan site whose outer walls, ornamented with faux romantic-era garden statues, seem gloriously incongruous. This is no pastoral, leafy Garden of England haven, but an England blanched like a painting with colour yet to be added, or perhaps rinsed out to minimal hues by harsh weather. The seaward side of the road between Camber and Dungeness is MOD land, its forbidding chain link fences enforcing miles of KEEP OUT. A whole street-size wall of terrace houses with doors and coloured, painted windows is all fake frontage surprise, an army training war play facade. Soon after the barracks entrance, brown signage for Dungeness Nature Reserve, and the long road leading back to the sea thankfully appears.

Strung out across the landscape are pylons, stitching the seam between land and sky, a stark reminder that since the mid ’60s this has been the home to one of Britain's 16 active nuclear power stations. I expect the hum of 50hz, but there is no obvious audible crackle of life here. The wind engulfs and steals away any sound across the flats inland, across fields occasionally interrupted with a glimpse of the slow white turbine spin of future energies, all man-made motion powering indeterminate numbers of kettles, mobile phones and TVs in faraway houses.

The renewed sense of bleakness is disquieting. Dungeness is 'Britain's only Desert', so classified  because of the lack of natural vegetation. Oddly, the arrival of the power station seems to have encouraged plant diversity through inadvertently providing a windbreak and respite. The narrow tarmac road cuts through the vast pewter, brown and cream shingle stretch, where weatherboarded shacks, sheds and dwellings of varying condition are randomly spread. There are broken down shacks, burnt out shacks, and collapsed heaps of timber, where shacks once stood. There is a variety of lived-in dwellings, from ramshackle to tidy, from simple to the sophisticated and architecturally designed.

Prospect Cottage, formerly owned by the late artist and film director Derek Jarman is perhaps the best known and most visited. Strikingly painted in matt black, with yellow window frames and doors, part of John Donne's poem "The Sunne Rising" is fixed in black carved lettering on one wall. The garden is a special attraction. Reflecting the barren essence of the peninsula – sculptured driftwood, scrap metal cast offs and hardy plants look grafted onto the shingle. Many other former fisherman’s huts have become permanent homes and / or artists’ retreats. I visit a small shed-come-open studio, where lino-prints were displayed, a catalogue of work for sale alongside a leaflet on effects of radioactivity. In another house, the resident has created an artwork from what the tide has brought in: Wellington boots, a flipper, spade handles, mesh balls, hard hats , a toilet seat and a lot of shoes. People must lose a lot of shoes.

Dungeness has an unusual history, allowing people to self-build dwellings on short leases; that meant it wasn't an organised settlement until after the war. There was little official control over development forms and materials, and although generally most built traditional weatherboard beach style houses, during the 1920s, around 30 dwellings were created using old railway carriages. The 1947 Town and Country Planning Act meant permissions for any new buildings and extensions were required. The informality and free building approach of these settlements were seen as a blot on the landscape in the post-war period by local authorities who wanted the building brought under control,. The 19th century had seen a trend of farmers selling land to speculators who in turn sold plots to working class Londoners to build weekend or holiday shanties. Gradually, the communities settled, became more cohesive and permanent, and concerns arose around the settlement's planning framework and how it could tie in better into local infrastructure such as water and electricity. These dwellings often didn't have clear boundaries. Being nestled on the beach there was often no need for a plot or garden, because growing crops or plants was simply too tough. Residents built their own pathways rather than building alongside roads that services could navigate. Rules were broken, boundaries not delineated, buildings bodged. But not everyone was easy about such a non-plan, almost squatter-like approach. Indeed, the shacks were often perceived by planners as substandard.

City planner and architect, Patrick Abercrombie, best known for his post war planning of London complained in 1926: "innumerable wooden shanties have sprung up - better sociologically but artistically deplorable. Many of these are on wheels (although unmoved for years) in order to avoid rates; and whole fields have become so packed with them that they are extremely unsanitary.. The preserver of rural amenities cannot allow any sort of old junk cabin to deform the choicest spots."

John Gabbe, a design and conservation architect for Shepway District Council who has written much about the planning history of Dungeness, identifies how 'romanticised architectural martyrdom' led to the designation of this settlement as a conservation area. However, this designation also made the area more attractive to middle class and wealthier buyers. In 2003, Simon Conder designed 'black rubber house', a new dwelling rebuilt around a timber framed fisherman's shack, creating large walls with full-height glazed doors, and rubber cladding that emulated the tar cladding traditionally used.  Effectively, it created a stylish designer beach house to be rented out. More recently, Nord Architecture were commissioned to design a house for Alain De Botton's Living Architecture project. The aesthetic resulted in a simple black house which 'responded to the natural drama of the site'. Finished in tarred black shingles on the outside and concrete and timber within, it is also offered as a stylish, if expensive, holiday retreat. Though carefully thought out to stay in keeping with the surroundings, it still signals a shift towards increasingly exclusive living and holidaying, only affordable to wealthier renters and buyers – a privileged few. It almost seems to mirror the gentrification we've seen in urban areas.

Jarman's beach house aesthetic championed the poetry of Dungeness as an escape, and others understandably have bought into the same charms, and want to share the experience of a wonderful place. If Dungeness is to preserve and retain its character of stark, hostile beauty, its non-plan, scattered shelters, it must limit building and ironically enforce some level of regulations, in contradiction of the essence of why this landscape and settlement holds such appeal. It is evocative of a freer, simpler life away from the trappings of material culture and regulated life.

I find it hard not to fall in love with this place and its human-testing rawness. I like the effort and crunch of shingle underfoot, the feel of wind so harsh that it is futile to care about much more than being in the moment. It's not to romanticise the hardship of bygone fisherman or hard-edge living, but Dungeness' contradictions provide an alternative to the throb and hum of workaday life - an odd rub-along of nature and man-make-do side by side.