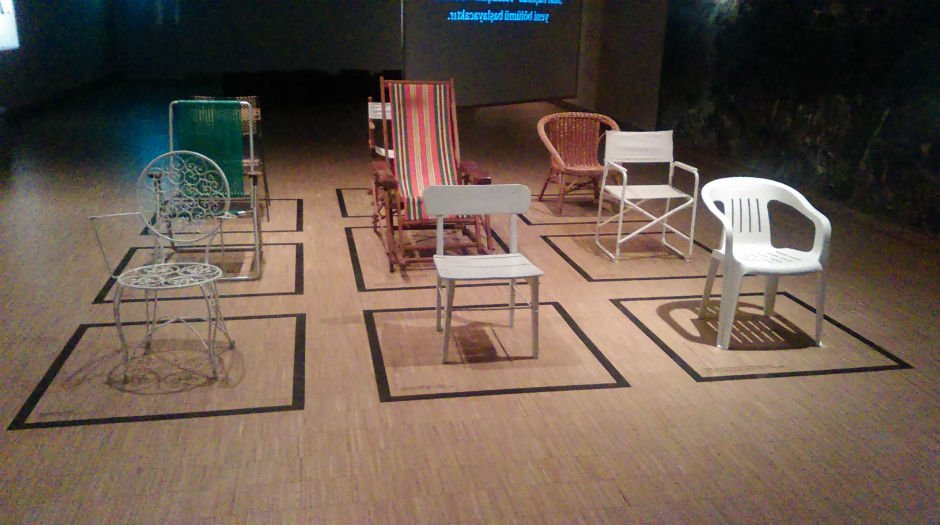 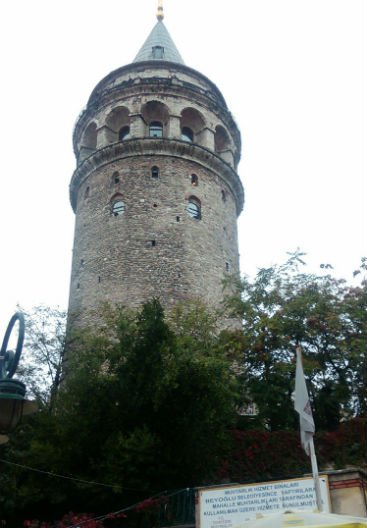 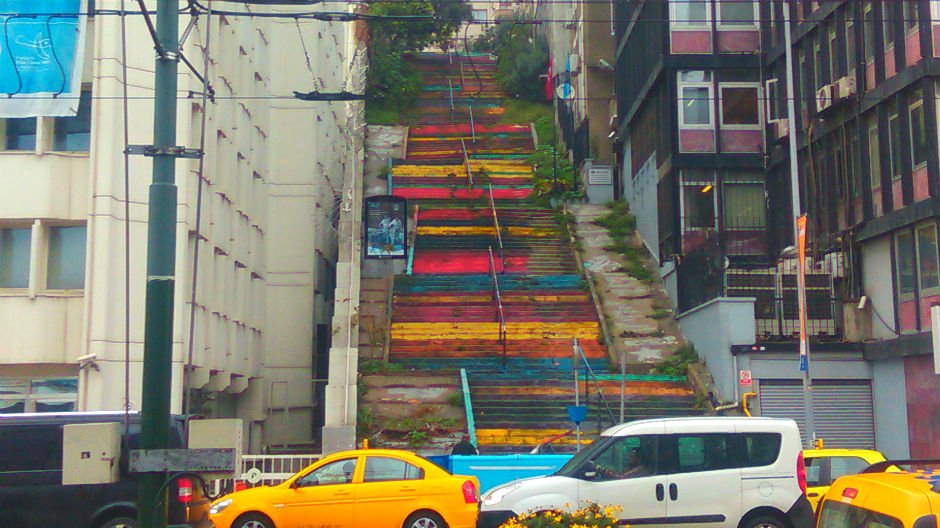 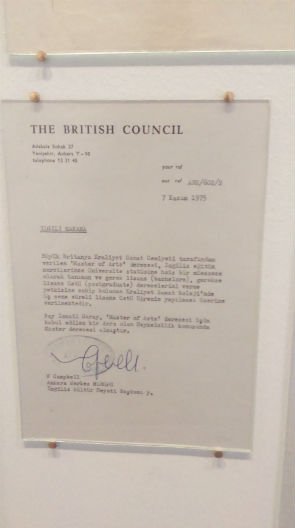 A letter from the British Council in SALT Galata 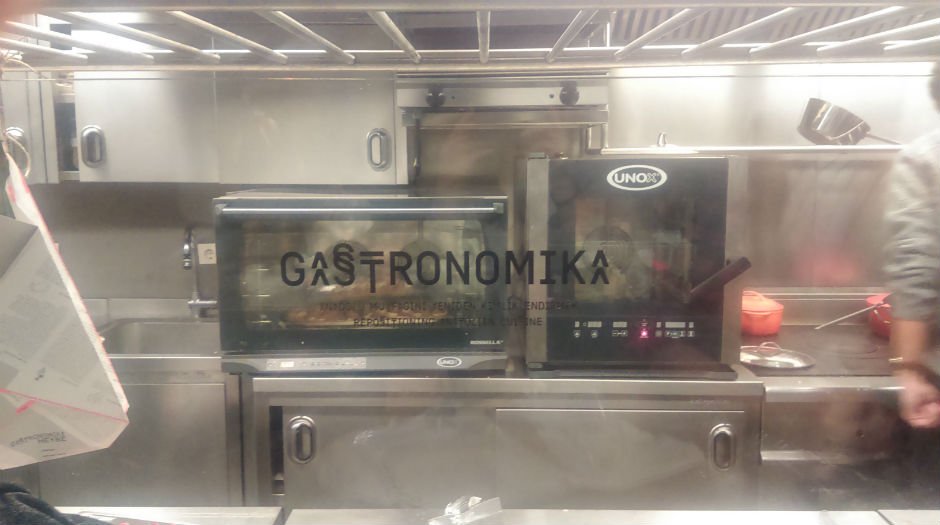 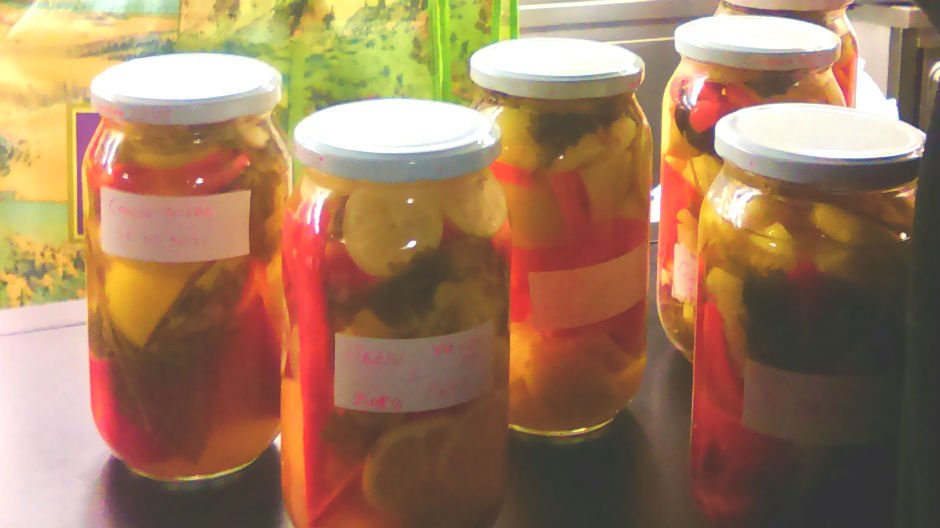 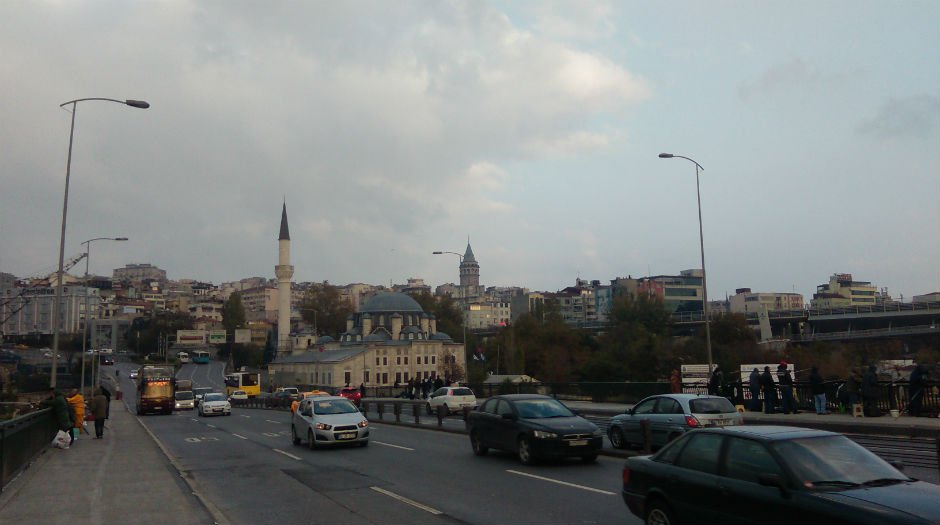 Galata Tower from the Galata Bridge 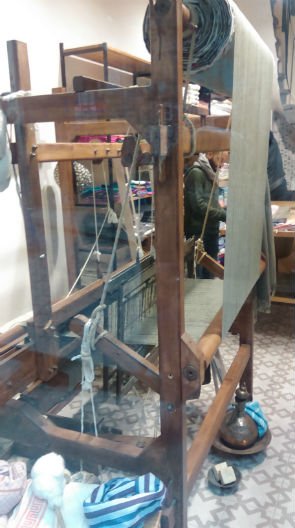 I spent my first two days in Istanbul in Beyoğlu – a district north of the Golden Horn on the European side of the city. I opted for the slightly whimpish option of taking the metro through the tunnel to avoid the 570m climb with case in tow. The tunnel is the first subterranean metro in continental Europe and second only to the London underground in the world, so at least I’m not the only one who wants to avoid the hill.

The district has grown around the Galata Tower, built by the Genoese in 1348, so inevitably in Beyoğlu all roads lead to it and it can be seen rising out of the landscape from the southern shore. However, the area has been occupied since Byzantine times and like much of Istanbul is a palimpsest for waves of foreign influence over time from Greek to Italian to French, from which it look its alternate name of Pera.

Galata, Karaköy and Cihangir are all made up of windy streets and thigh-burning hills with trendy cafes, sleek restaurants, art galleries and boutiques in pockets amongst streets organised around particular trades. So walking home my mental map was up music street and down lighting fittings street.

It’s clearly a creative, trendy part of the city with busy bars, cafes and lokanta (meaning eating house but a name given to many of the new Anatolian restaurants that are reimaging traditional Turkish cuisine) but it’s more relaxed and under the radar than Shoreditch. Perhaps more like parts of Berlin, the streets transform from shuttered shops in the morning to bustling cafes and shops in the day and humming bars as night falls. Fittingly, in the Pera Palace Hotel, which is where Agatha Christie wrote parts of the Orient Express and has a private museum dedicated to its history, I’m told it’s where many writers live – so much so you almost don’t consider yourself a write unless you are based in Beyoğlu and in particular Cihangir.

In the cafes, bars and restaurants you can see that design is very important – the interiors are slick, modern with touches of Turkish craft from painted ceramic tiles to carved wooden details. Small craft shops can be found in the nooks and crannies of the streets, including a shop selling scarves woven from a loom in its front window to stalls where craftspeople carve wooden utensils.

On the walk down to Karaköy SALT Galata, in the old bank building, is a quite spectacular. It’s unique not only for its building and the amazing views of the historic district on the other side of the river but also for its research centred philosophy which the Director Vasif Kortun describes as ‘post-curatorial’. The current show of İsmail Saray's archive and work is by chance about the artist’s connection to London where he studied at Central Saint Martins and the RCA. There’s even a letter to the British Council amongst the numerous letters and documents he has amassed.

The Istanbul Design Biennale is based in Galata Greek Primary School just beyond Galata bridge where the locals with their fishing lines each day and the financial district. It’s in the harbour area, called Karaköy. Walking north-west, and as ever in Istanbul uphill, you end up in Cihangir which stretches up to Taksim Square. Here there are art galleries and temporary art spaces, music venues and a further swathe of excellent eateries. Istanbul is very much a culinary city so it’s no surprise that a number of projects in the biennial address the future of food. From Circassian dumplings from the Caucasus, to cheeses from the Syrian border and the Anatolian cuisine that ranges from hearty stews to dainty pastries. In its second space SALT Beyoğlu on the main street in the district I went to Gastronomika, its an open kitchen and research project dedicated to repositioning the gastronomic, visual and audial narratives of Anatolian cuisine. In their own words ‘the project cynically asks whether hosmerim, the Turkish cheese dessert, can be as cool as cheesecake?’.

On Sunday afternoon chefs alongside students from the culinary institute gathered to cook a menu of Anatolian classics with their guests (the restaurant is open to all and free). They share stories of their grandmother’s cooking and swap tips and knowledge with the public. I must have been the only English person there so felt like I’d won some sort of secret lottery and also a free delicious lunch. Refreshingly and unusually the gallery café doesn’t take second prize to the exhibitions themselves, which is an equally fascinating dissection of the Turkish holiday home, almost archival in its scope it looks at the historic, vernacular, contemporary and domestic architecture in another encyclopaedic research exhibition taking in 19th century etiquette guidelines, family photos, models, maps and objects. In a city full of cultural and historic venues, contemporary art galleries and platforms SALT is leading the way.

Circling round from Taksim Square another cultural heavyweight, the IKSV have their headquarters. The IKSV organise and direct the design biennial alongside it’s older and more established sibling, the Istanbul Biennial, and run a series of music events at their nearby Salon. The biennial opening party brings us to their building with stunning views over the Golden Horn and the old shipping yards beneath. The Moving Museum is also in town, in its Istanbul iteration.

Despite current political pressures and the dominating economic draw bringing a clamour of international companies and investors to the city the cultural scene seems overwhelming optimistic of its place in the city but this is not a naïve optimism – there are many critically engaged voices that are willing to critique and question the status quo but are adamant that culture has an important stake in the future of Turkey.