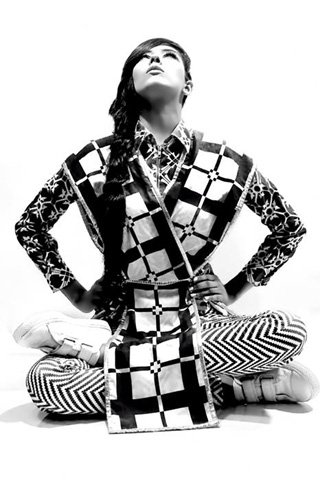 British Council and Southbank Centre present an exclusive film screening and catwalk show exploring contemporary Pakistani fashion at Alchemy 2014 on 21 May from 6PM in the Clore Ballroom at Royal Festival Hall.

The evening will kick off with ascreening of a documentary by filmmaker William Williamson exploring youth, dress and identity in Pakistan, co-commissioned by the British Council and Dazed.  The film sets the tone for pieces to come by looking at the individual relationships to dress in the country. The film will be premiered online on www.dazeddigital.com in June 2014.

The catwalk show features the work of young Pakistani designers Indifference, Wardha Saleem, Mohsin Ali and Ali Xeeshan. The designers reveal the breadth of the fashion design coming out of Pakistan and show how they are embracing their cultural identity while pushing boundaries. Echoing the sentiment of the Citizens Archive of Pakistan at Alchemy 2014, the film and collections seek to explore the ever-evolving Pakistani identity.

Indifference are Sofia and Sarah, graduates of Pakistan Institute of Fashion and Design with honours in Womenswear Fashion Design.  It was during their studies that they attended a workshop at the prestigious L’Ecole de la Chambre Syndicale de la Couture Parissaine, where they concentrated on the art of draping and research development. Their trademark is the collage of traditional textile techniques and prints, which they creatively use in contemporary silhouettes. Smooth lines, limited colours, unusual pattern and combinations of materials characterise their garments.

SHAHNAMEH narrates the mythical and historical past of the Persian Empire from the creation of the world until its remains, which became an extended part of the Indo-Pak region.  Written over 1000 years ago, it was meant to protect Persian collective memory amidst a turbulent sea of cultural storms.  Indifference presents their take on the cultural artefacts of the ancient times presented in the timeline of the modern world.  Each print denotes a graphic illustration, an epic of its time rendered with a story underneath.  The clothes are a marriage between the Eastern and Western influence.

A textile design graduate from the prestigious Indus Valley School of Art and Architecture, Wardha Saleem is in sync with her passion to create and experiment. Wardha Saleem’s creations speak volumes of her deep understanding of textile, fashion, art and crafts.  By blending traditional and indigenous handicraft methods, contemporary cuts and designs using kitsch colours, Wardha is well-known to create the ultimate taste of fusion. Today, her eponymous brand is known for brilliance in print and design.  The Wardha Saleem Label is known for giving antiquated crafts a modern look.

Mohsin Ali is a recent graduate of the Pakistan Institute of Fashion and Design with his hard work winning him a bronze metal. Originally from the Hazara community in Quetta, Mohsin’s designs are inspired by the rich cultures of Pakistan.

Ralli quilts (ralli meaning to mix and connect) are traditional quilts made by women in the regions of western India and Sindh, Pakistan as well as surrounding areas.  In many parts of Pakistan, including the Indus Region, rallis are to this day made for dowries. Each ralli quilt is unique, and the designs are kept in women's memories and passed down through generations for thousands of years.

Rallis are mainly cotton and cotton mix, so to create a new and innovative rally Mohsin Ali has combined the traditional cotton with laser cut leatherette. RALLISTIC, designed especially for ALCHEMY 2014, exhibits a range of ralli techniques from patchwork to applique and quilting. The collection has been kept modern through its body hugging silhouettes, shift dresses, flared dresses and jackets, cropped tops and high-waisted pants.

Holding an honours degree in couture from Pakistan School of Fashion Design, Ali Xeeshan has received a welcoming response from those who needed a change from one specific style of bridal wear. The colours of Pakistan appear clearly in his bridal range, choreography and the events he manages. He presents Pakistan in an array of colours, elegance and a stature that the culture holds.  Describing his design philosophy, he says, “I use conventional materials to create unorthodox aesthetics and a simple harmony between the traditional and the avant-garde.”

Sarah Javaid, a designer and lecturer at the Pakistan Institute of Fashion and Design explains more about the country's growing fashion industy here.