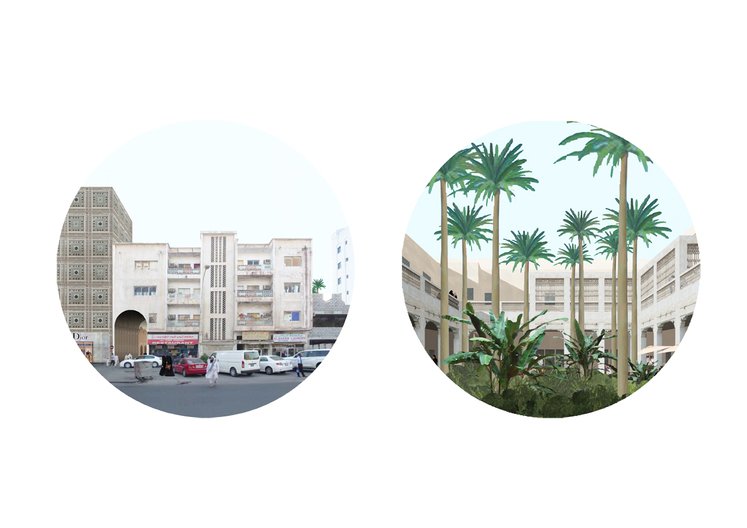 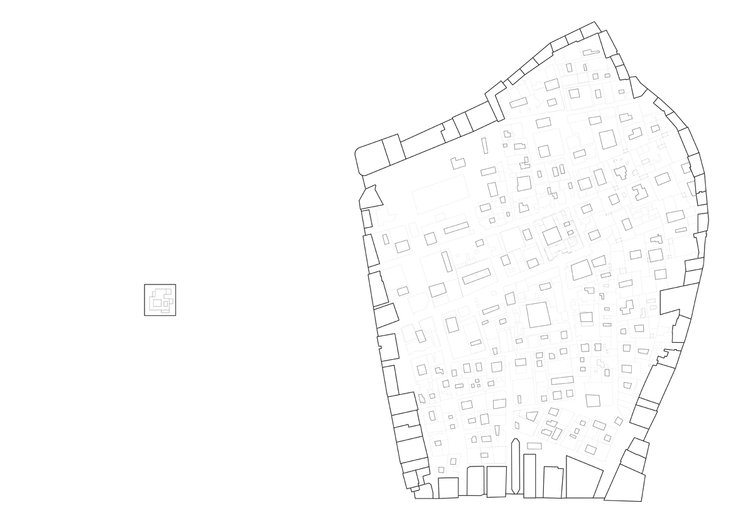 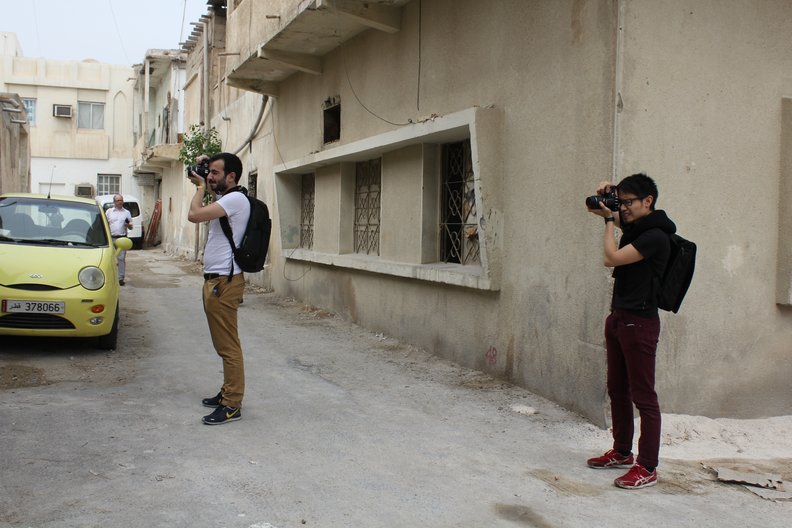 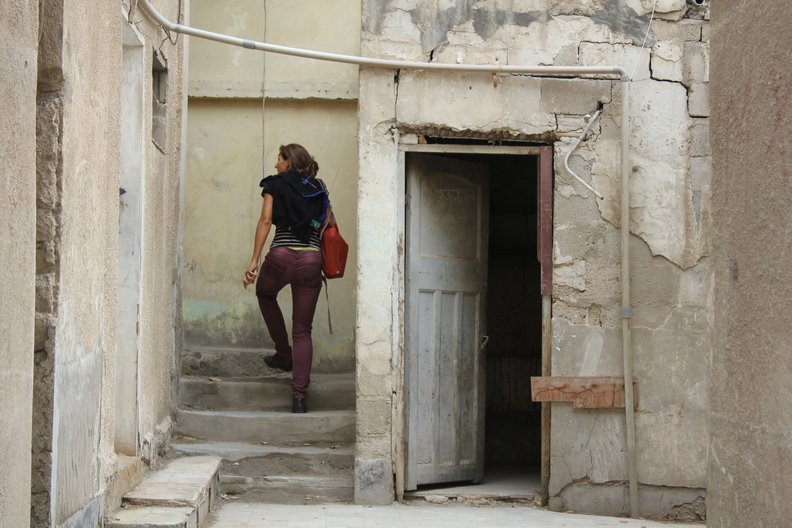 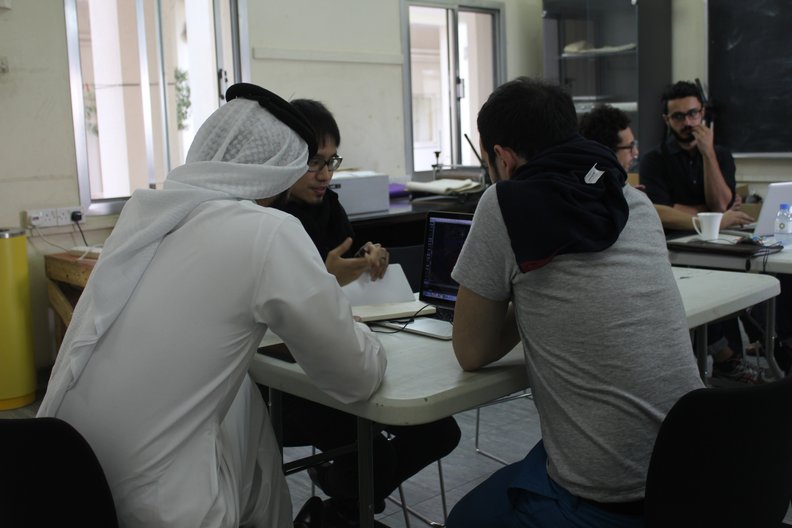 Our project rethinks the courtyard as a spatial framework in organizing life within the Al-Asmakh neighborhood. It explores and incorporates certain characteristics typical of the traditional Islamic cities while addressing the current living norms.

Observing the richness in the way the existing courtyards have been re-appropriated by individual inhabitants, we propose to further intensify its qualities by strategically linking the courtyards into a network of atmospheres. Rather than assigning a specific program, the project allows each of these spaces to become a catalyst in determining the activities that can be accommodated and proliferated. Instead of the traditional private use of the courtyard, the ground floor will be freed up for public use, while the privacy of the inhabitants will be maintained in the upper floors, with the rooftop opening up to become part of the private realm. These steps allow exploring and rethinking the conventional limits between the public and private domains, as well as the introverted character of the existing built environment.

At the same time and in order to achieve such an evolutionary and incremental form of development, the project makes a reference to the traditional khatta concept that defines the plots, boundaries and services, while allowing individual families to determine the layout. Similarly, by shifting this principle to the scale of the urban block, we propose to surround the neighborhood with a perimeter belt of five to seven storey buildings, while providing the main services beneath the existing streets on site. Apart from reinforcing the idea of the neighborhood, this shift operates as a ‘defensive’ boundary and becomes the element that concentrates the real estate demands while protecting its heart and enables its existing urban fabric to evolve beyond economic considerations. Simultaneously, and opposed to its solidity, it also becomes highly permeable through a series of gates, enhancing circulation further and drawing visitors into Al-Asmakh.

Like the individual courtyards that define life within the neighborhood, our project for Al-Asmakh proposes an alternate urban condition having a complimentary character and relation to the existing rich constellation of urban forms in the city.

Interview with Georgios and Faten by Vicky Richardson on the last day of the charette:

Tell me a little more about your proposal and how it developed:

Faten: The Old Doha site is crowded, dirty and unwelcoming. It is an old part of the city, dominated by labourers. You don’t see ladies there and there are hardly any passers-by. Once the sun sets, I’m not supposed to go there.

It’s a challenging project, but it is important. It has great value. I was born in Doha, but I’m Palestinian. The Msheireb Arts Centre in Old Doha is an old school and has strong memories for me as the first school I went to as a kid. All schools in Doha used to be run on the same system. There was a kind of standard design for schools. This was the first one for women: during the day girls went to school, and in the evening, boys.

Georgios: From the first stage, we had some clear ideas. Our goal has been to take the discussion about Old Doha to a different level. We wanted to design a tool to trigger discussion, even if that meant to present something provocative. We are optimistic, especially because the Qatari audience and people we've spoken to engage with the project and find the proposal promising. The project got developed by producing an overall strategy for the neighbourhood, instead of "solutions". The idea is to provide a framework from which people can inhabit it and propose a series of strategies for programmatic uses. We’ve been intentionally neutral and programmatically free.

And your experience of the Old Doha Prize?

Georgios: The experience has been intense, but fantastic. It’s great that the British Council got such multi-disciplinary teams together. It’s been a very good introduction to the local culture and heritage, particiularly for someone visiting a Gulf country for the first time. The prize is one thing - the journey to get there is another. We’ve had a chance to work with Qatari people, build new working relationships, and to see the possibilities of collaboration. We’re keen to keep this partnership going.


Faten:  I really learned a lot from these two guys (Calvin and Georgios). It’s a new way of thinking for me. I worked in a team for seven years, then I did my masters and I really missed the spirit of working in a team, so I have particularly enjoyed that aspect of it. We also discovered that these people from the UK are very good at designing in 3d!