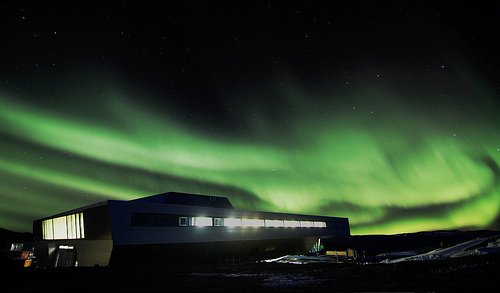 Ice Lab will play host to the official opening of the Manchester Science Festival at Museum of Science and Industry (MOSI).

Ice Lab features some of the most innovative and progressive examples of contemporary architecture in Antarctica.

Visitors can learn about some of the scientific research which takes place within and around the polar stations, such as collecting 4.5 billion year old meteorites which show how the solar system was formed, drilling ice cores whose bubbles of ancient air tell of Earth's climate history, and studying the Antarctic's Mars-like Dry Valleys.

They can also experience the Antartic landscape through two new artworks by Torsten Lauschmann, commissioned by The Arts Catalyst for Ice Lab, which use sounds, sights and sensations to evoke the disorientating Antarctic landscape and immerse you in a bewitching environment.

The exhibition is accompanied by an events programme:

31 Oct | 7pm - 9pm
Scientists in the Antarctic are confronted by a shape-shifting alien that assumes the appearance of the people it kills.

2 Nov | 10am - 3pm
Brutal cold forces two Antarctic explorers to leave their team of sled dogs behind as they fend for their survival.

March of the Penguins (U)

3 Nov | 2pm - 4pm
A look at the annual journey of Emperor penguins as they march - single file - to their traditional breeding ground.

The Great White Silence (U)