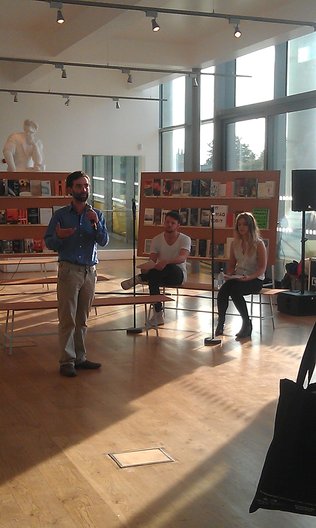 Reading in the Futurist Library 620 BC - 2013, produced by Nathan Jones 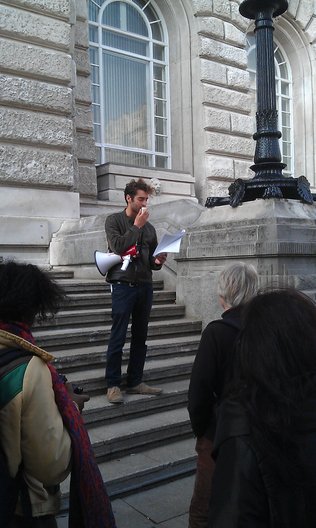 This day-long forum bought together distinguished thinkers and practitioners from the fields of art, architecture, urbanism, visual culture and sociology for a series of interdisciplinary discussions about new ways of thinking about the city.  It addressed what role culture can play in urban and social transformation, and posed some key questions about our individual and collective stake in the creation of our urban futures.

In addition to the day-long forum, a series of expeditions around Liverpool set to explore alternative ways of looking at the city; imagining new possibilities, and addressing the scope of large scale transformations as well as less official forces of change. Participants in the programme, along with other invited contributors were also invited to select material for a Futurist Library. You can download a full programme of events here.

Future City is a collaborative project between Liverpool Biennial and Mathaf: Arab Museum of Modern Art in collaboration with Tate Liverpool, and Liverpool John Moores University. This was the second Pop-Up Mathaf event in the Qatar UK 2013 Year of Culture programme, and will be followed by both a Future City forum in Doha in late 2013 and a publication.

Below is a round-up of some of the key discussions and ideas from the day.

The first discussion of the day by Saskia Sassen, Professor of Visual Sociology at Colombia University, and Irit Rogoff, Professor of Visual Cultures, Goldsmiths, prompted key ideas and set a theoretical tone that recurred throughout the day. Sassen and Rogoff addressed the role of the city in the production of the idea of citizenship, and what lessons might be learned from recent global protest and occupy movements.

What they see in these events is a shift to the making of citizenship, rather than its consumption; a recovery project of sorts, in which being in common becomes as qualified a basis for public gathering as having in common. This has marked repercussions for urban planning, and can be recognised in the contemporary demand and use of such shared and perceived democratic spaces as the marketplace or the museum. Temporary inhabitations of public space and participation in ontological communities (that is, simply being together in a particular time and place as engaging in a collective practice), mark a renewed making of public ownership, rather than simply assuming it as a given.

Both agreed that it is in complex environments of indeterminacy and incompleteness that real transformation and reinvention are allowed, and that this variable ‘frontier space’ is key to providing an arena for encounters without prescribed rules. As such, both argued against over-determinism in major planning, and for more ‘frontier spaces’ to be left available for people to make their own citizenship.

Next, Imre Szeman from University of Alberta and Werner Hofer of University of Liverpool discussed with architect Noura Al Sayeh what impact resources have on our models for thinking about the future city.

Szeman described energy systems as the most powerful determinate for city development and the form of living that take place within it, as well as what originally made it possible for people to become, and stay, urban. In the future, as these energy systems dramatically change, so too we will need to rapidly adapt our infrastructure and understanding of what energy systems and associated issues determine. Szeman predicts they will eventually drive a rethinking of the nation state and established political structures, towards a geopolitical map based on energy resources, with new regional borders forged by the social and self-organised communities. As such, the group discussed the need to rethink public policy now, to bring science and environmental development further into the everyday and better question the private versus public ownership of energy.

The third session of the day explored the role of culture in the city of Liverpool, and assessed the different agendas and terms played out though forms of urban transformation and investment.

Chair Andrea Phillips from Goldsmiths began by posing questions of how we might reconceptualise ‘regeneration’, to a process of change not simply structural and economic, but also social and cultural, which involves a series of complex systems we play a participatory part of. Following a well-intended but misplaced presentation from major local developer Peel Group on the planned development of Liverpool’s remaining undeveloped dockland, Claire McColgan from Liverpool City Council gave a impassioned case for the role of culture in providing a voice and sense of identity for local people; which for her was of greater significance than buildings in making the city.

Creative Director of Tate Liverpool Francesco Manacorda discussed the changing model and role of the museum; as a public space with a renewed sense of civic identity, and as a place for the co-production and making of knowledge, as opposed to simply presenting it – akin to the library model of cultivating knowledge production. The museum model discussed was one of an agent of emancipation and of political acts, which is uniquely positioned to be at once connected and disconnected, to provide an indeterminate terrain for creative possibility.

The panel discussed how they might work together to create more opportunity for this ‘frontier zone’ and what potential there might be for involving culture and artistic representation at the very beginning of a major development proposals, rather than simply as an occupier of the final product. Emancipation rather than a mono culture was the ruling argument at this table (and indeed within the room).

The final two sessions of the day entitled ‘What do we need to construct?’ and ‘What should be remembered or forgotten?’, addressed the social and historical constructs relevant when thinking about urban development, and the impact of cultural memory on the shaping of space.

Nasser Rabbat, Aga Khan Professor at MIT proposed a process of unmaking, and greater assessment of what to deconstruct. He described examples of the expansive and luxurious  ‘Emirate style’ as a ‘fantasy mileu of utopian capitalist cities’; and the fading of civic space, over determinism, and disguising of the poor, as the effects of a neo-liberal transformation. For Rabbat, the Arab Spring uprisings present an opportunity and an aspiration for a new kind of urbanism – one that readdresses civilisation, allows for indeterminacy, and is greater connected to social justice. This recurrent theme of determinism was extended with a focus on technology that, as a current driver for architecture, was too determined and left no room or desire for innovation. We should remember instead that architects in the first are human beings and citizens, who should align themselves with humanity as well as design, to ultimately leave things better than they were before.

Hamid Dabashi of Colombia University extended this argument with the ‘condition of camp’, in which future surveillance states where humourless machines have agency is the real concern for future cities. The gathering of information and monitoring of actions is not the issue but the potential reading of this data without human reason. Data could become the primary record rather than the real, with a loss of human agency to trust in the false reasoning of computers.