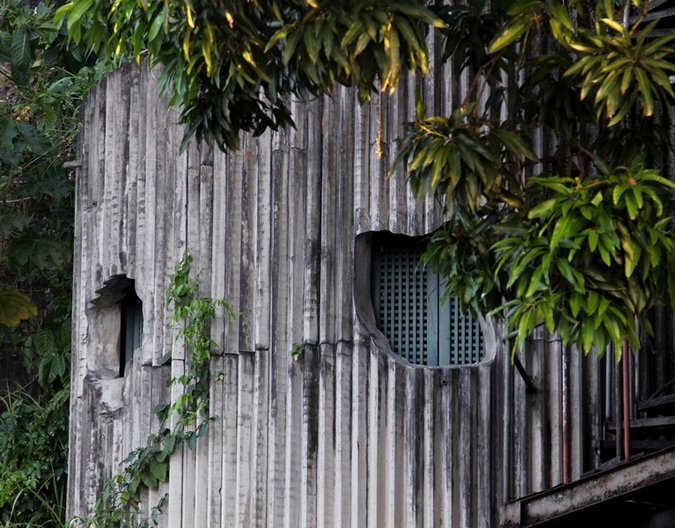 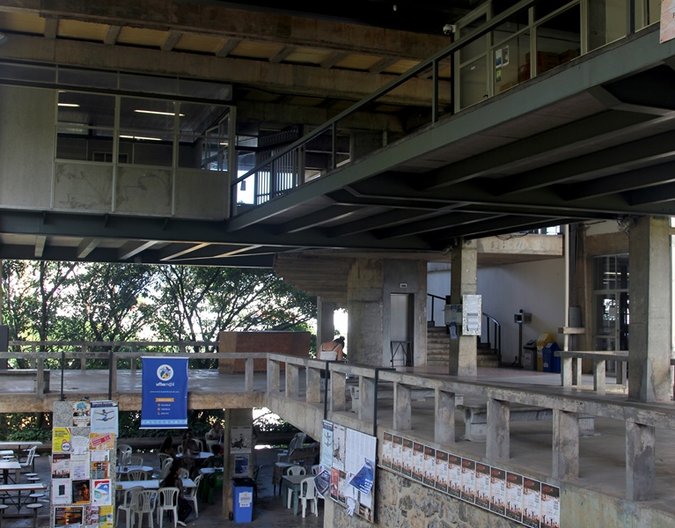 The second in a series of writings from Jane Hall, who is currently researching the work of architect Lina Bo Bardi in Brazil as part of a British Council fellowship. Visiting a number of Lina's buildings and archives of her work, Jane will explore Lina's intentions, and how they relate to and resonate in architectural education and young practice in Brazil today. Here Jane reports from Salvador, where she visits some key buildings from Lina’s proposed urban revitalisation of the city’s historic centre Pelourinho.

The hardest thing to imagine standing in Pelourinho, Salvador’s cultural centre, is what Lina must have seen when she was first here in 1958. Now a rainbow of beautifully restored colonial houses line the cobbled streets which make up a tiny proportion of the city that is now home to over 3 million people. Salvador, an incredibly hilly place, first colonised along the peaks or ‘higher town’, now encompasses the infamous (and less colourful) district of Barra (pronounced ‘Ba-ha’) much frequented during Carnaval, to the more refined Vitoria and Graca, where tree lined boulevards house wealthier Salvadorians in multi storey apartment blocks, usually with a colonial manor house at their base. Pelhourinho, the first part of Salvador to be occupied during the 1700s has, since 1985, been transformed into a picturesque ideal of what was once a colonial village; now of course minus the slavery, but full instead of tourists. Lina however would have seen Salvador in the way that much of the city remains; run down, semi colonial houses built in, around and on top of makeshift favelas, steadily gaining sophistication by their Brazilian inhabitants who so espouse her notion of craft.

Now in its 7th stage of restoration Salvador has become a prison for tourists. Having created an environment that so stratifies the lives of its inhabitants, the city makes it impossible for ‘gringoes’ like me to safely walk anywhere other than within the confines of the stage set that Pelourinho has become. Lina was at first part of this process, returning to Salvador during the 1980’s to help coordinate the restoration of the city rather than in her words “transform it into an ‘ice-cream’ city”[1]. Unfortunately due to the rising conservative government of the time, Salvador was restored in a manner that celebrates the colonial and monumental appearance of the architecture, rather than prioritise investment in the local social and economic conditions of the people.

Despite this, Salvador still acts as an archaeological site of Lina’s later works which attempted to address these themes. Her recovery plan for the historic centre was not implemented in full, however, hidden or disguised amongst superficial facades and modern multiplexes, significant projects do still exist. These demonstrate Lina’s desire to unite the past in a non-linear way with the present, celebrating the ‘simple architecture’ that she began to develop in the early Sixties in Salvador, and realised most clearly in the 1970s at SESC Pompeia in Sao Paulo.

In Salvador, the concept of an ‘architecture of poverty’ refers to a conflict between craft and folklore, or as Lina renamed her hybrid, Popular Art. This was about the inclusion of people within the processes of modernisation, celebrating the utilitarian way the Brazilian people reinvented and adapted everyday things, making what she saw as a developed craft seen most prevalently in the North East. In reference to her work restoring historic buildings, this meant unifying and reorganising them for the purposes of the present, experimenting with a prefabricated corrugated concrete structure pioneered by João ‘Lele’ Figueiras Lima, whose other works of note in Salvador are the bizarre ‘temporary’ council building (apparently soon to be replaced) and various parts of the Architecture department at the University of Bahia.

The corrugated concrete technique, only 20mm thick, seems significantly out of place considering the now prettified town, and  it’s difficult to envisage what Lina’s wider plan for the use of this material on the scale of the city would have been. Luckily I thought, I would see this at the Ladeira da Misericordia; Lina’s project that attempts to demonstrate the union of colonial architecture with the new technique at this scale. I had seen this project in photos, you will recognise it, a restaurant built with a massive tree growing from within its centre, light flooding in from an open roof in a way that I had previously considered really quite incredible and the corregated concrete in an abundance of curves. So I was completely shocked to find litter all over the floor, broken shutters, a less than safe spiral staircase and possibly Jumanji going on inside.  Daniel, Patricia and Johanna - three quarters of the collective GRUNA (meaning coven in Portuguese; they describe what they do as ‘mining’ rather than be forced to define themselves as architects) showed me around as if this was entirely to be expected. Their explanation extended only so far as to say that the Fundação Gregório de Mattos who own the property don’t understand the value of Lina’s work.

This followed a visit to the Gregório de Mattos Theatre - another experimental attempt of Lina’s, this time to redefine the notion of theatre, which is similarly abandoned. A local artist, Amandrade, who had worked with Lina and was part of the counter culture in Salvador during the Dictatorship, showed us around the theatre. He now works for the Fundação and had some years previously broken into the property and returned to put his own lock on the door, giving one key to the foundation and keeping one for himself a tactic he hoped would encourage them to take more care of the building.  Situated in three knocked together colonial buildings, the theatre is a vast space spanning two floors with absolutely nothing else inside apart from the most insane spiral staircase cantilevering from a singular massive red (obviously) column.The space is devoid of a stage,  provided more as a space within which theatre could ‘happen’ rather than act as a formal invitation between actors to engage with an audience. A few of Lina’s wooden chairs are still dotted about, but most were  swiftly replaced by softer padded seats, now stacked high in a corner -  the masses didn’t quite agree with her that their chairs should be purposefully uncomfortable so as to keep them actively engaged in surrounding events. The one other striking and more specifically ‘hidden’ element of Lina’s work here is the massive window, best described as a hole (similar to those at SESC) which is kept permanently closed behind a giant shutter. Patricia and Johanna pointed into the distance, discussing which buildings in the clutter of makeshift homes below might provide the best vantage point to see the window from the outside, while Daniel explained to me that the window was named ‘Boca do Inferno’ meaning Mouth of Hell after Gregório de Mattos -  a 17th century Salvadorian poet known for his biting satires. Given the usually sensitive nature of restoration work, Lina was not shy of making new and monumental statements. I was unsure whether this was to declare a break with the past, or a decisive statement of modernity, testing the limits of the existing structure. Either way, we spent a while pondering how she would have gone about building it.

It seems ironic given all of Lina’s experiments with restoration, that her work is in itself in need of some restoration of its own. Other projects within Salvador such as the Casa do Benin (the only white house in the Pelourinho) and Solar do Unhão, both museums, do get significant care but are not proudly displayed specifically as projects of Lina’s, or are in any way celebratory of the experimental modern architecture that they are built from. Halted by the military regime during the late 1960s to the early 1980s, there is a strong sense that in some ways Lina left her work here too soon.

The challenge to bring attention to Lina’s projects in Salvador seems to parallel the position of architectural education, in which architects still cling to the authoritarian Modernist legacy of the twentieth century. GRUNA, established earlier this year, are a collective from the University of Bahia that graduated slowly over a period of 8 years (it should take 5 years to qualify as an Architect in Brazil where an Masters degree is considered an addition to focus on theoretical work). They were the only students to  work collaboratively on their thesis project -an analysis of the area of Riberia on the Northern tip of Salvador – describing themselves as the ‘black sheep’ of their school. They work together on projects that focus on public space, whilst finding work as freelancers to get by. The end of a recent rush of successful projects has only now allowed them to reflect on what they think GRUNA could be, but the one thing they seem positive about is that they want to find alternative methods of creating architecture. “Here there are not that many interesting options for us, interior design is the cancer of practice” says Daniel. They all are perceptively aware that by studying, as most students do, at their local university, in their case a public one, that they in turn owe their education to the public; a notion many in the profession may not reflect upon, with a significant number of architecture students here being privately educated and working for only the top 10% of a population that is rapidly growing to nearly 200 million. All four of them are actively engaged in local policy and relay tales of the follies of recent infrastructural attempts by the local government in preparing for the World Cup, “We now have three stadiums for two teams. Fifa allowed one stadium to fall into disrepair just so they had an excuse to build a new one” says Daniel, “at first they wouldn’t let locals sell Acaraje (a local Salvadorian speciality) within 1km of the stadiums”.

Keen fans of Lina, GRUNA seem to know all of her projects inside out, even including a tomb built for a dominant family in the construction industry that never happened! They describe her anecdotally, “She fell out with a lot of people. Lina told Pietro that he would have to make more money to sort it out when people sued her”, but counter balance that by saying “If anyone wanted to ask anything they would come to Lina for help on how to do something - she was a sort of matriarch”. You get a sense that GRUNA talk about her a lot, and can see from their bookshelves that she is of constant fascination.  They attribute the revival of interest in Lina’s work to her increasing popularity outside of Brazil. With two new books in English being published later this year, alongside at least one new Portuguese text, and the touring ‘Together’ exhibition, the world’s enthusiasm for Lina seems to have ignited interest back home. So if we ALL write to the Fundação Gregório de Mattos now, maybe they will take notice and begin looking at Lina’s work here with more value. This might not only give Salvador a potentially economically and socially equalising way of developing, but also make it a safer place for gringoes like me to visit in the future.