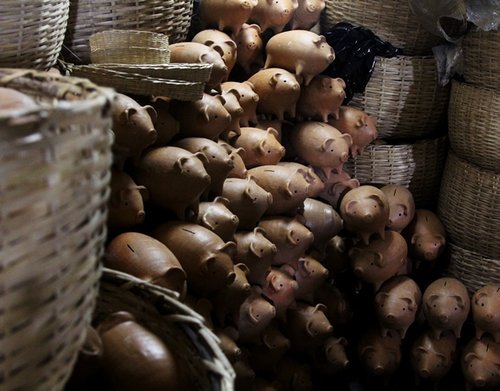 Jane Hall continues to report from Brazil where she is researching the work of architect Lina Bo Bardi as part of a British Council fellowship. Jane’s research explores how Lina's intentions relate to and resonate in architectural education and young practice in Brazil today. Here Jane reports from the Solar do Unhão in Salvador - as both an expression of Lina’s response to craft, and a platform to explore contemporary ideas of race and local identity in Salvador.

Salvador is the largest city on the northeast coast of Brazil and the capital of the Brazilian state of Bahia. The first colonial capital of Brazil, the city is one of the oldest in the Americas and the third most populous Brazilian city, after São Paulo and Rio de Janeiro.

Solar do Unhão is Salvador’s main cultural institution. Founded by Lina after an invitation by the governor of Bahia to direct a Museum of Modern Art in the North East, ‘MAM’ opened first in the Teatro Castro Alves before moving to the Solar do Unhão with the new name, ‘The Museum of Popular Art’ in 1963. The first exhibition in this location was titled ‘The North East’, however Lina would have rather it been called ‘Northeastern Civilisation’. Her intention was to definitively represent the primitive crafts of the North East in a technical manner, demonstrating the practical aspects of culture found in people’s everyday lives; “a lesson of popular experience, not as folkloric romanticism but as an experiment in simplification”.

Lina recognised the polarised nature of culture in Brazil. Although the lowest of the North Eastern states, Salvador had always been considered inferior; the people lazy and the way of life primitive. Even during my trip, sitting in a Boteca in São Paulo after arriving back from my visit to Salvador, the Paulistanos in the bar were keen to re-enforce their notion of the idle Bahian; “They are so lazy, what do they do all day?”. I was surprised to find this opinion so entrenched in the Brazilian mind-set, especially because neither of the guys I was speaking with had ever visited the North East. Or maybe it was specifically because they hadn’t visited that made them hold such views? Due to the vast expense of internal air travel and relative lack of development within the interior, many Brazilians haven’t travelled around their own country, which appears to initiate other problems in Brazil.

Lina however was instantly inspired by Salvador. The time preceding her move there had been filled with hopes for a ‘national democratic bourgeois revolution’ which, by the time of the Military coop in 1964, had failed to happen. 1960 had in some ways been the height of this optimism, when Brasilia was inaugurated as Brazil’s new capital. The city was created from an International Modernist vision based on the ideas of CIAM 8 [1] and situated in the Central Plateau, many, many miles away from the Atlantic coast. Juscelino Kubitsheck, Brazil’s progressive leader and friend of architect Oscar Niemeyer, aimed to develop a more ‘Brazilian’ way of life; offering a utopian ideal designed around the popular technology of the era, the automobile. By situating the capital in the middle of the country, Kubitsheck tried to symbolically and geographically unite the far flung reaches of Interior Brazil with the Amazon, from the most southern town of Florianopolis, to the tropical North East including Salvador.

Concurrently, Lina was exploring the same modernist themes in a very different way. For her, the Solar do Unhão was more than a physical architectural experiment; it was an experiment in merging the concepts of the museum with that of the school. This built on the work that Lina and her husband Pietro Maria Bardi had developed together at the Museu de Arte de São Paulo from 1947, where the museum was seen primarily as a centre for education, and ran courses from its very beginning. Lina asked “what comes first, Houses or Museums?”, emphatically stating in response that they “all come at once”. First practiced in Salvador, this concept introduced vitality and leisure to the previously static idea of the museum as simply a mausoleum of the past. For Lina, Salvador provided the perfect experimental environment within which these ideas could be tested, away from the growing conservatism and intellectual superiority of São Paulo.

What may have attracted Lina to Salvador was the growing artistic scene there, led by Glauber Rocha - the director of Cinema Novo with whom she supposedly had an affair. Formed mainly of Europeans, this group created an entirely experimental way of looking at Brazilian culture, creating a synthesis with other visual arts. Guillherme Wisnik, curator of the X Architectural Biennale in São Paulo describes Lina as someone who was able to bridge the divide between art and architecture, embracing sculpture and other creative disciplines within her work. She was able to find a position within the art community, which continued during the dictatorship, where her Modernist counterparts were unable to evolve a meaningful counter culture. This may have been partly due to her influential position as the wife of P.M Bardi, the Director of MASP. While in his shadow, she was heavily involved with the new Modern Art movement in São Paulo and had the power to make grand gestures while subverting the circles of the cultural elite with whom she was associated. Her experiments in Salvador did not last long however, as Solar do Unhão was unceremoniously closed by the Dictatorship in 1964. Lina travelled extensively during this time to avoid complete political exile in the late 1960’s, though was in some ways spared due to the protection of her marriage.

The Solar do Unhão is situated by the water’s edge in a restored colonial building. There are magnificent views over the ocean at sunset and many people visit purely for that reason. Currently undergoing more restoration, Solar do Unhão is one of the simplest and clearest examples of Lina’s work to unite the culture of craft with a new modern architecture. Lina stripped back the structure, however a huge spiral staircase in the main space is a prominent addition to the museum. Built between 4 existing wooden columns, the staircase reaches out to these for support. Using local wood, the joints are all taken from ox carts that Lina had seen elsewhere in the state. Here, she manages to demonstrate how small details used in existing local items can be replicated on a larger and structural scale, creating a new form of modernity based on local skills, crafts and tradition. Use of such techniques relates closely to Lina’s increasingly complex notion of time, and her engagement with the past to articulate a modern present.

In this way, Solar do Unhão can be seen as Lina’s response to craft, as opposed to what is often considered folklore. Her lectures at the University of Bahia outline the difference between these two concepts. Here, folklore refers to the ritualistic objects of African religions still practiced widely in places such as Salvador. I visited São Joaquim market, along the port of Salvador, which offers all necessities required for making sacrifices to the numerous gods which proliferate the population. There are twin gods, miniature metallic devils (messengers of the Gods), live pigeons for slaughter, and strangely, hundreds of clay piggy banks. All of the items found here are hand crafted symbols for religious ritual, and probably best illustrate the origins of the perceived uncivilised nature of Salvadorian society to the outside world. While embracing the spirit of these objects, Lina seemed keen not to allow this historic, Afro-Brazilian religious culture to obscure the beauty of the craft culture, which she also saw as developing concurrently. Knowing the perceived nature of Bahia to other Brazilians, she sought to  redefine the very idea of civilisation stating it to be “the practical aspect of culture, as is the life of people at any one moment”.

This all represents an especially confusing idea of what Brazilian ‘culture’ actually is. Originally colonised by the Portuguese, Salvador is also part of the most ‘black’ state in the whole of Brazil, and indeed the most ‘black’ place outside of Africa (as many Brazilians are keen to tell me) with 80% of the population having some link to an African heritage. This also means a link to a history of slavery. Despite the strong representation of black people in the state, racism and preference for skins of any other colour is still wide spread. In the 1950s Brazil opened its doors to immigrants from other nations in an attempt to dilute the volumes of African descendants in Brazil. Hence Brazil is home to the largest populations of Japanese and Italian communities outside of their own countries. A young guy at SESC named Julio joked with me that “Everyone wants to steal a Brazilian passport, you just change the picture, because anyone could be Brazilian”. Despite this appreciation for the multiple aesthetic identities of the average Brazilian, Julio also indicated the severe issues in Brazil where poverty, a condition seriously looked down upon, is considered much worse than skin colour but, is in fact closely related with race.

Diane Lima, founder of the cultural platform Criative Dissonantes, based in Salvador, speaks of her collective’s attempt to make people more aware of Black culture. She frequently runs workshops aimed at using ideas about local craft and the empowerment of being able to make things yourself as a way to give the black community more pride. A fashion designer by training, Diane (pronounced Ge-an-ee!) wants to create more opportunities for the wider creative community. She describes what she perceives as the lack of a ‘cultural structure’ in Salvador to promote training in the arts amongst the black population. The Brazilian government have begun to recognise the value of artistic practice, and many Brazilians mention the idea of a ‘Creative economy’ to me. This concept, where larger companies sponsor creative practice as a tax break, could provide great opportunities for small groups. The main problem is education. For those who work with traditional craft practices, it is harder to benefit from these initiatives without some form of organisation to empower them to do so, as most of the money thus far has gone to already successful creative groups. This is where Creative Dissonantes intervenes.

Later we are in a Boteca and Diane begins talking to a 9 year old girl who has her hair in braids. They start talking about the difference between having your hair out in an afro (as Diane does) as a proud statement of one’s ethnicity. Diane translates for me that the girl was worried about appearing unpretty if she wore her hair in this way, not only in the future as an adult but right now as a young girl. “It’s education, look around, there are no other people with hair like mine, no positive role models”. Diane is passionate about using creative practice, and linking it with traditional local craft skills as a way of educating others. Diane is the first big Lina enthusiast I have met who is not a trained architect.. She embraces the theoretical side of Lina’s work; the idea of relating traditional craft skills evident in people’s day to day lives as a way to include them in the process of modernisation and education. Lina’s work attempted to show Brazilians the ‘modern reality’ of using basic, cheap or found objects to make things of necessity. She saw poetry in the processes of production, while those like Diane also see a way of empowering their own people.

[1] The Congrès internationaux d'architecture moderne – CIAM (International Congresses of Modern Architecture) was an avant-garde association of architects, founded in 1928 and disbanded in 1959, who intended to advance both modernism and internationalism in architecture, and promote its concept of the "Functional City."CIAM 8. The Heart of the City: Towards the Humanisation of Urban Life was one of the organizations most influential publications.