Our Tour of the London 2012 Olympic Site 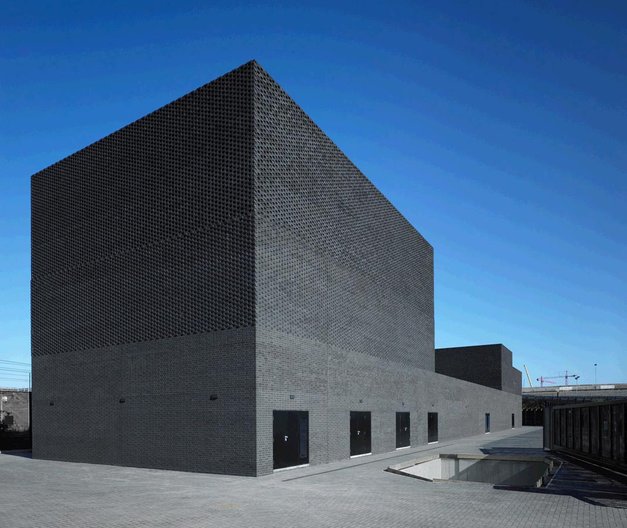 This week the Architecture, Design, Fashion team were lucky enough to visit the 2012 London Olympics site for a tour with Kay Hughes, Project Sponsor and Principal Design adviser for the Olympic Delivery Authority.

On a freezing, grey, overcast morning we were met by Kay at Pudding Mill Lane Station and taken through a series of security checks before being allowed to taxi through the site. With the first building completed last week, this seemed like a perfect time to view the Olympic site as the landscape and architecture start to come together in preparation for the 2012 games.

Kay talked us through the development of the site and described how the bridges and walkways that run through the landscape are designed to open up the Olympic Park and make key connections to the surrounding areas, revitalising the Lower Lea Valley area. Over 200 existing buildings were demolished before starting to build on the site, of this, 97% of the waste materials have been recycled and reused. Examples of this can be seen in some of the 34 bridges for the site which use recycled aggregate in the new concrete structures. It is planned that walkways and underpasses around the site will be injected with art pieces and installations by designers, such as Jason Bruges Studios, and the Olympic gardens will open up the landscape providing the area with a much needed rest-bite for the public to enjoy. One of the rather talked about installations is Anish Kapoor’s Orbit tower which looked to be going up quickly. We were slightly divided in our opinions about the tower and I will leave you to make up your own mind about whether it will be ''Britain’s answer to the Eiffel Tower''.

As for the site buildings, we were all impressed with the Velodrome. Hopkins Architects have set the bar with their completion of the first permanent building for the site.

The Velodrome is a graceful example of modern British architecture, the steel framed structure is clad in a cedar wood panelling that has been treated with rhubarb juice (a real ode to Britain!) to lessen weathering of the wood. As we were returning back to the southern edge of the park we drove toward the Aquatic Centre, designed by Zaha Hadid, a much anticipated building which will also act as a gateway into the Olympic Park. As with most of the buildings, additional seating is being added to accommodate the millions of visitors that will attend the gaming events. Unfortunately, the addition of seating to Zaha's building interrupts the flow of the huge, soft edged, winged structure, and blocks off the side curves. We thought it was a shame that the spectacular form of this building will not really be revealed until after the games, though it will be a treat for the local community to enjoy. Nord Architects have made a discreet contribution to the site, designing substations which aim to ‘’form the fabric of the Olympic site itself; having permanency, weight and dignity’’. The buildings dark brick facade has a sooty, post industrial quality that reflects the past of the East London site and against the grandeur of the various stadiums, I would recommend watching out for the architectural subtleties that the infrastructure of the site has to offer.

Visit the Olympic View Tube for a panoramic view of the site and a nice warm cup of coffee or contact the ODA for further information on tours. The London Olympic Games will open on July 27th 2012.