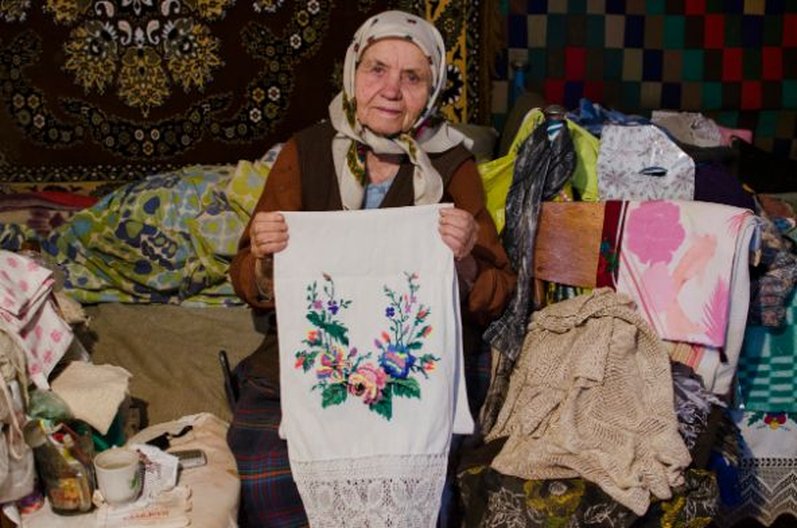 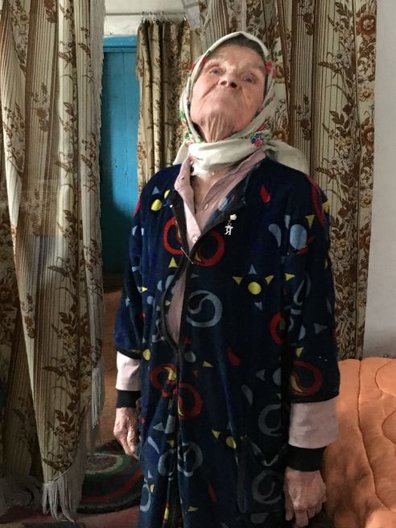 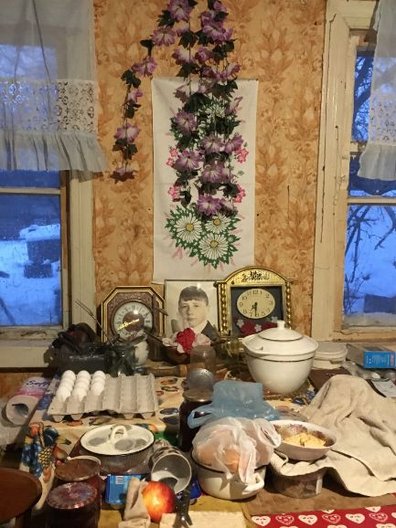 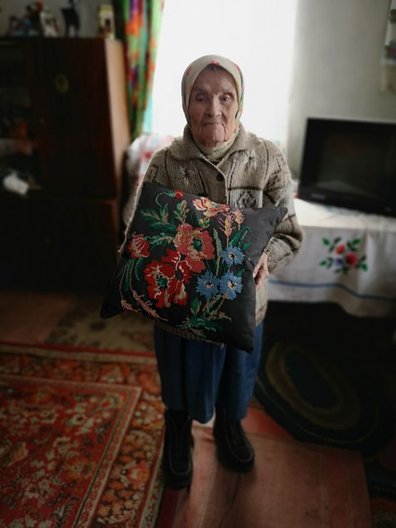 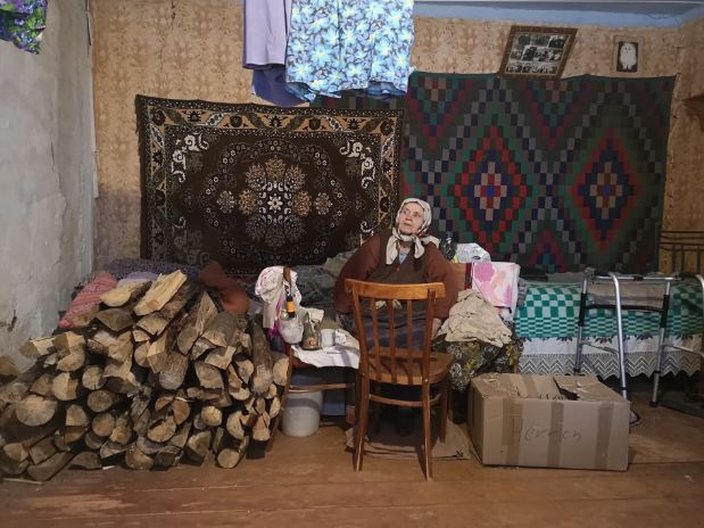 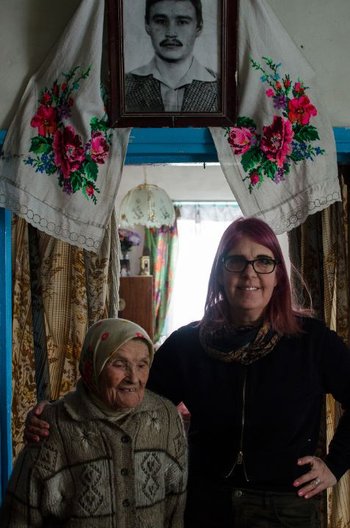 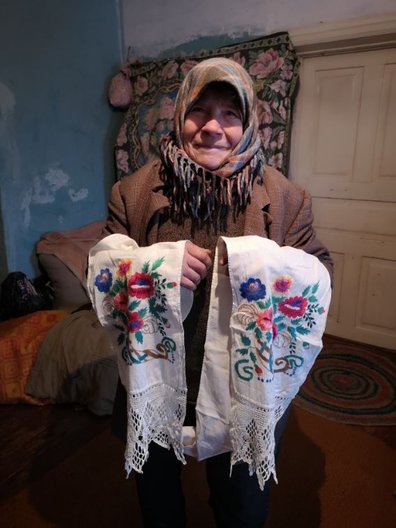 Embroiderer and educator Claire Baker was selected for one of our Crafting Futures grants in 2018. Here Claire talks about the dying embroidery traditions of the Babushkas of the Chernobyl Exclusion Zone, and how she hopes to engage young people in the UK and Ukraine in the skills and heritage.

As a textile artist whose work is mainly concerned with abandonment, memory, place and the lost, I have based both my research work and practice within the Chernobyl Exclusion Zone, Ukraine for the last four years.

With the support of Crafting Futures I have furthered my Embroidery as a Language project and am focusing on the unique embroidery culture within this region in order to help to continue the legacy of the Chernobyl Babushka.

The Babushkas are self-settlers who returned to live in the Chernobyl zone of alienation against all odds. This forgotten community is completely cut off from modernisation and the rest of the world. The rapidly diminishing population is an obsolescent and individually isolated community of only 128 (with an average age of 80 years), and the extinction of their whole culture is impending.

Over two trips to Ukraine in December 2018 and January 2019 I spent five days in the Chernobyl exclusion zone after overcoming political difficulties preventing me from visiting [certain] areas. After much last minute negotiation and through my contacts I eventually was able to travel to some of the remotest villages in the exclusion zone (an area the size of Luxembourg).

The zone looks incredibly beautiful in the snow, but winter is a very difficult time for the self-settlers, many cannot venture outside their homes. Temperatures reached -15° and some roads were impassable, limiting the villages I could visit.

On the first day we had to be escorted by a ‘government envoy’ who allowed us access to 3 villages and unusually had gathered a number of self-settlers in one place. This did allow me to meet more of the Babushkas though the situation meant it was more of a Christmas party of long lost friends than a research opportunity, amazing to witness. I made further introductions in preparation for my later visit and found women who wanted to stitch with me, cementing our relationships. All were happy to show me their beautiful examples of work and tell me their history.

I carried out a number of what always started out as formal interviews but which [seemingly naturally] rapidly deteriorated into somewhat informal ‘chats’ about the weather rather than embroidery practices. They are concerned with the here and now though were delighted with the interest shown in their stitched work from ‘when they were young’.

I worked with a number of very special Babushkas spread over five villages, including Kupovate, Parishev and Teremtsi although disappointingly, on my second trip we could not reach the village of Teremtsi again due to deep snow and where Valentina and Tatiana were expecting me.

Some nights were spent at Chernobyl Hotel -10 (for workers and tourists) though we moved to more homely and authentic accommodation in the village of Оране on the zone’s border. At Sergai’s house we were served homemade Ukrainian food and (medicinal) vodka. Sergai is extremely knowledgeable about the zone and its people and I discovered much I did not know concerning local politics and customs, including folklore and superstition. He also took me to visit a ‘new’ Babushka - Katerina (83) who loved her embroidery and had many exquisite examples; including a fully embroidered pair of curtains stitched in the 1980’s.

My guides (from chernobylwel.come) were also invaluable giving my work in Chernobyl context and an added insight, for example; the grandmother of Lara who is 81 and lives in Kyiv, blames all illnesses on Chernobyl and continues to wash her oranges with soap.

As with every visit I acquired new knowledge and skills, but on these trips it was much more focused. My list of questions were considered and designed before the trips using a more systematic approach. Political information was more forthcoming and I learned much that needs further investigation, as it will certainly affect the continuation of this project and the wellbeing of the remaining population.

There was also much laughter when talking about their traditional headscarf wearing (this is a whole new project in itself), there were many demonstrations and I was tested on my new knowledge, I was somewhat useless.

I was also taught an amazing new technique to transfer pattern from a completed embroidery onto new fabric using only an aluminium spoon and by rubbing it on your head. This is the ‘Knock Knock’ technique and I will practice it as soon as I have the perfect spoon.

The two visits have made further onsite research much more urgent, each visit indicates how much more there is to learn. The cruciality is now not only due to the age of the population. Although Pripyat is still accessible to tourists the recent difficulties I had in obtaining permits to visit the outlying villages was evidence of serious political change.

My outlook has also changed in terms of notions of the size of the project, it is much more vast than I envisaged, almost unmanageable and relating to socio-economic aspects of life there that are much more fragile and precarious than previously imagined. The trips reconfirmed that this is, and must be my life’s work.

After collecting embroidery examples, narratives and making new work, stage two of this work is now underway presenting the project to youth audiences, initially in the UK and soon in Ukraine. By collaboratively delivering workshops encouraging interaction, value, knowledge and skills will be passed on in order to share the Babushka story and their textile legacy.

Claire is also a lecturer at The Northern School of Art, has recently completed an MFA at Manchester Metropolitan University and works internationally as Arts Director of a festival held in Ukraine which supports the people still living in the Chernobyl exclusion zone.

You can find out more about her work at www.claireabaker.co.uk