Winning team for the British Pavilion 2018 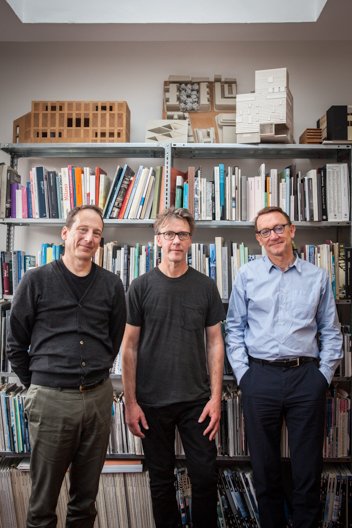 We are thrilled to announce that Caruso St John Architects and artist Marcus Taylor have been selected as the curatorial team for the British Pavilion at the Venice Architecture Biennale 2018.

"Be not afeard; the isle is full of noises; Sounds and sweet airs, that give delight and hurt not.” The Tempest, William Shakespeare

"It is an honour for us to have been selected to curate the British Pavilion. In the year before Brexit, we plan to transform the building into a generous public space that can be a popular meeting point within the gardens of the Biennale." Peter St John, Partner at Caruso St John Architects

Following an open call, a panel of architecture and design specialists from across the UK selected the winning team from a shortlist of four proposals.

"The open call generated a strong field of proposals but the panel was unanimous in its selection. The uncertainties that exist in today’s world give the British Pavilion a new imperative and Island promises to be a thought-provoking installation that I am confident will spark debate." Sarah Mann, Director of Architecture Design Fashion, British Council

Adam Caruso and Peter St John won the Stirling Prize in 2016 for their Newport Street Gallery for Damien Hirst. They have worked on several major arts projects including Tate Britain Millbank and Nottingham Contemporary. Marcus Taylor, originally from Northern Ireland, has collaborated on several projects with the practice, including most recently a joint submission for the UK Holocaust Memorial.

Adam Caruso and Peter St John established their practice in 1990 after meeting whilst working for ARUP Associates and Florian Beigel. The practice rose to prominence after winning an international competition for the acclaimed New Art Gallery Walsall in 1995.

Caruso St John Architects’ engagement with the art world has been notable for the creation of museum and gallery environments that enjoy the confidence of curators and artists alike. Alongside recent cultural projects including the Newport Street Gallery, Nottingham Contemporary, the Millbank Project at Tate Britain and spaces for the Gagosian Gallery in London, Paris, Rome and Hong Kong, the practice’s portfolio also includes projects that intervene directly in the centre of the European city. Recent projects include the Lycée Hotelier de Lille, a new head office for the Bremer Landesbank in Bremen, the new ZSC Lions ice hockey stadium in Zurich, as well as substantial mixed-use developments in Munich, Hamburg, Cologne, Antwerp and Zurich.

In parallel with their practice, the partners have taught internationally at institutions including Harvard University, the Academy of Architecture in Mendrisio and the London School of Economics. Peter St John is currently a visiting professor at London Met University and Adam Caruso is Professor of Architecture and Construction at the ETH Zurich.

To find out more, visit www.carusostjohn.com

Marcus Taylor was born in Belfast in 1964. He grew up in Northern Ireland before attending Camberwell School of Art (BA) and The Slade School (Postgraduate). He has exhibited widely in the UK and abroad including the Saatchi Gallery and the British Art Show. His work has been collected by several major institutions including the Tate, Fondation Cartier and private collectors. He has worked on large scale projects including a bridge over Paddington Basin with engineers Buro Happold. Recently he has collaborated with Caruso St John Architects on a proposal for the UK Holocaust Memorial, one of 10 shortlisted projects. He has been awarded a RIBA East Award, RIBA East Small Project Award and has been nominated for the RIBA House of the Year for a collaborative project with Lisa Shell Architects. This was also commended in the 2017 Architectural Review House award. He lives and works in London.

British Council and the British Pavilion

The British Council has been responsible for the British Pavilion in Venice since 1937, showcasing the best of the UK's artists, architects, designers and curators. The accompanying talks and the Venice Fellowships initiative, along with the Pavilion Patrons scheme, enable the British Pavilion to work as a platform for discussion about contemporary art and architecture.

To find out more about the British Pavilion and previous exhibitions at the Venice Art and Architecture Biennales, visit: venicebiennale.britishcouncil.org