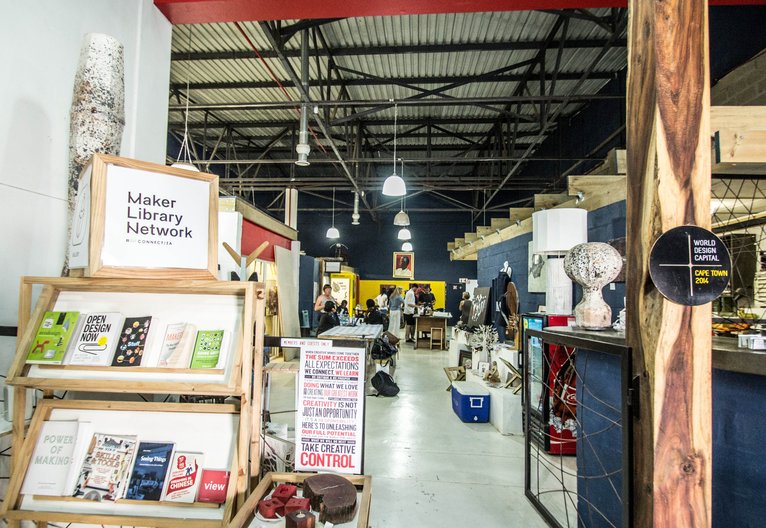 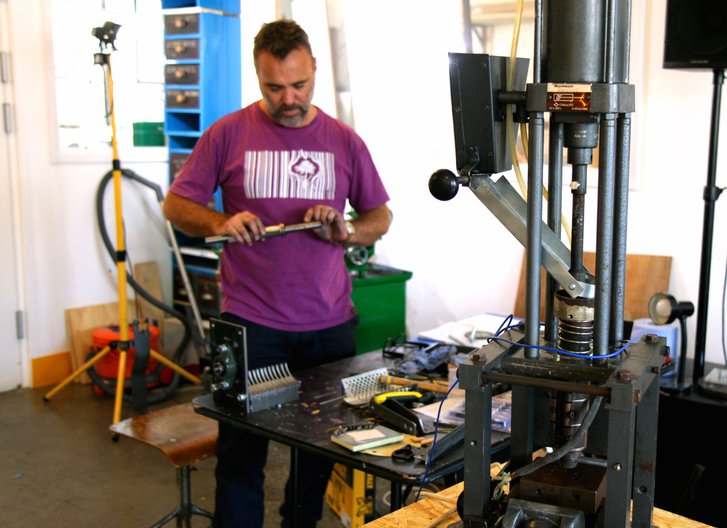 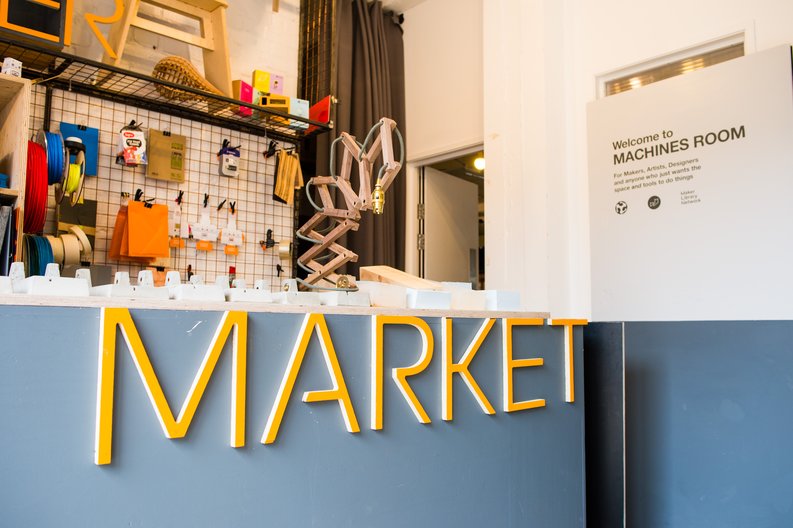 The shop at Machines Room 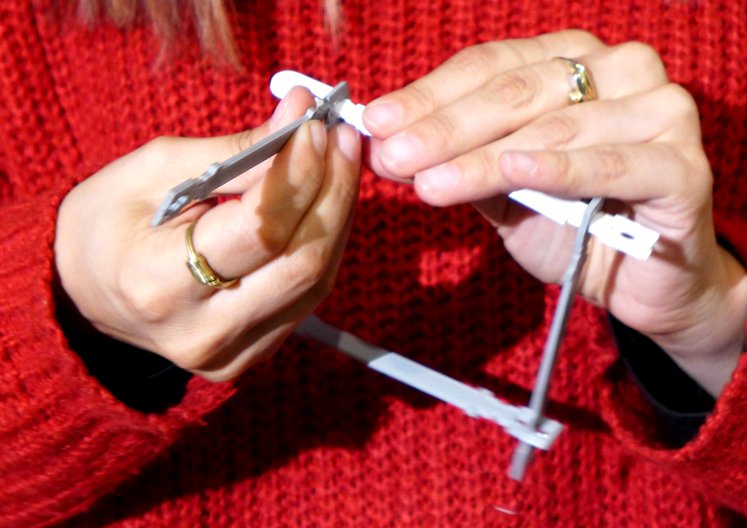 Craig's prototype for a new playful and sustainable coffee stirrer 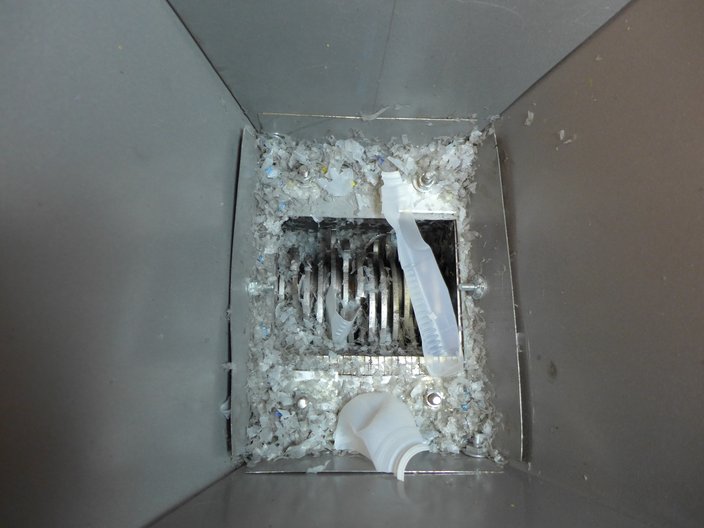 The Precious Plastics shredder in action 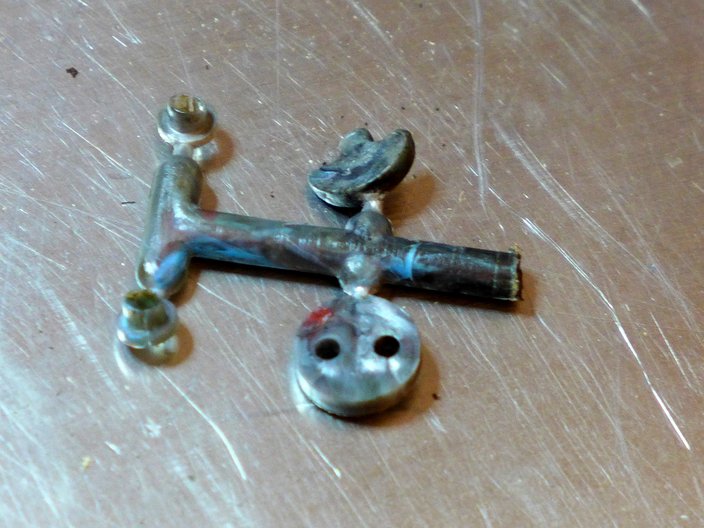 A button made during the showcase event

Craig Dunlop, a maker from South Africa, became the Maker Library Network International Resident at Machines Room from 14 June-14 July. Here he tells us about some of the ideas and processes he explored during his time in London.

You are the founder of Workspace in Hout Bay, Cape Town. Can you tell us a bit about the space and how you work with the local community?

Workspace was founded as a platform to facilitate cross cultural, socio-economic and inter-generational exchange within post-apartheid South Africa through creativity, hacking, making and fixing. The divisions within our community are not unlike any other communities in the world. The haves and have nots don’t really connect. We noticed that within the SA context, the haves are actually quite keen to help the have nots and it is just finding a sustainable way to facilitate that exchange.

You have been a member of the Maker Library Network for 18 months. Can you tell us about some of the outcomes of being involved in the project?

We have had benefitted immensely. Just the networking opportunity within our city has been direction changing, never mind the national and international connections. It has also gone a long way in giving Workspace and the maker movement credibility within South Africa. I am convinced that MLN is only the beginning of something potentially much bigger.

What were your motivations for taking part in the MLN International Residency at Machines Room?

It’s a rare moment in life when someone gets the opportunity to ‘check out’ of normal life and spend a concentrated amount of time focussed on a specific project. The inspiration that comes with that sustained focus and immersion is life changing. My understanding that academics have sabbaticals was exactly that – a way to motivate and breathe new life into the creative. I saw that opportunity and it coincided with ideas and projects from Machines Room that interested me and were easily transplantable back to Cape Town.

Can you explain what you’ve been working on and what the residency has been about for you?

My intention was to develop an idea around a quick coupling furniture bracket system design. This idea, along with the Precious Plastic machines that Machines Room wanted to be built, seemed like a good fit.

I arrived a month ago and set about rethinking the bracket whilst learning to use the hi-tech equipment. As the days went by, I saw myself consuming loads of material and realised I needed to build models of the designs to save resources. In its smaller version it became hard to not fiddle and play with it. It reminded me and Gareth of childhood building toys and so, being the distracted human I am, the vision began to change.  A few days later I bought a coffee somewhere and was shot with my usual pang of guilt as I tossed the one time wooden stirrer in the bin.

I began to consider the stirrer dilemma and wondered if we can close a small loop in the economy by recycling the milk bottles used in coffee shops and recycle them into stirrers – then, why not give the stirrers a second life as a toy before getting chucked. Perhaps just the act of playing with the coffee stirrer might stimulate thoughts of sustainability and circular economics and breed new ideas that might just change the world. The design is available from Machines Room - feel free to adapt and improve it - who knows it may be commercially viable as well.

The more important thing was to build the hardware required to change the world one coffee stirrer at a time. I battled sweated and bodged my way through the process of building the Precious Plastics shredder and refurbishing a 40 year old injection moulder which ended up working really well with its new 21st century computerised controller (another sharp learning curve for this 20th century bloke). It was satisfying to see the old machine in action punching out buttons made from recycled milk bottles shredded on the Precious Plastics machine which we built.

Typically, the machines where ready about 5 minutes before the opening of the showcase event at Machines Room and rolled into action as the doors opened. As one would expect, nothing worked optimally and I respectfully have to leave the fine tuning to my never ending source of encouragement and great ideas, Gareth Owen Lloyd and the Precious Plastics group of Nat, Susanna and Andy worked really hard to get everything done. I could not have done it without you all.

Above all, this residency has been about networking and learning about this fledgling industry that’s causing a storm. There is a singleness of purpose with all the people I have met – its all about open access and collaboration, its about empowerment, its about developing others, sharing, community and fits in with new business paradigms of people before profits, reputation before revenue and collaboration before competition. I am blessed to be part of this.

What are your highlights of the experience?

The delight in seeing fairly complex designs going from my head to screen to laser cutter/3D printer and CNC machine. I am fully aware of how these things work but I have always relied on others to operate them for me. It was great to see that I am capable of designing in 3D and also just having the time on the residency to spend learning that

What have you found most challenging?

Sourcing parts for the machines I was building. Nothing beats local knowledge and a local network. Being part of Machines Room was half the battle won, but it was a challenge getting to know the system and places and names of items.

What is next for you now, and is there a relationship between what you’ve been working on here in London and your work in South Africa?

The residency has helped me sort and connect ideas that have been floating around in my mind. The power of networking with other open access workshops and perusing the residency model within Workspace, has enormous possibilities. The potential of developing a range of products has been shown to me and will all rely on the network that has been formed. Likewise the co-branding with other makerspaces and products has good sponsorship potential.  The importance of the network has been made real to me.

Find out more about the Maker Library Network here.