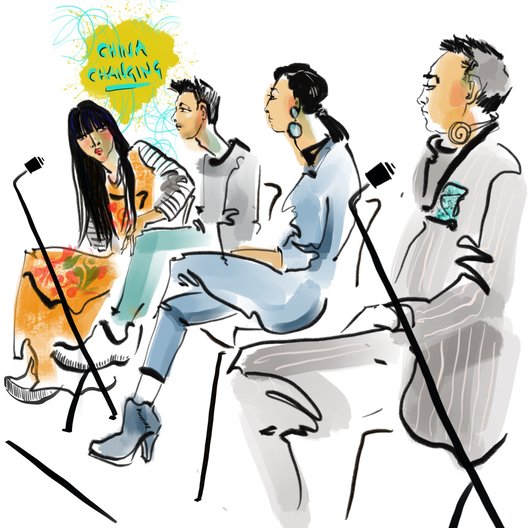 As part of the Southbank Centre's China Changing festival, we hosted a fashion forum posing the question 'what is a contemporary Chinese fashion aesthetic?' to a panel of experts based in China and the diaspora.

The speakers debated whether contemporary Chinese fashion has an established aesthetic, with Susie starting the conversation by referencing editor-in-chief of Vogue China, Angelica Cheung, who once reminded her that the modern Chinese fashion industry really only began twenty years ago and that European, or Western fashion as we know it, had a hundred years' head start. Chairman Zhang discussed how the fashion industry in China has developed rapidly over the last twenty years, including in education, noting that before 1983, fashion wasn't something that one could study. The internet and globalisation were discussed as influences that create a global fashion aesthetic rather than a Chinese or Western fashion aesthetic. The parallel influence on fashion weeks, seasonal collections, online sales and fashion superstars was also noted.

Designers Rui and Xu Zhi discussed their very different practices, sharing their creative and philosophical influences, and target markets. Designers were asked whether they identified themselves as Chinese designers, which sparked discussion on cultural heritage, Rui also talked about her time studying in London at the Royal College of Art. Susie commented that both designers are part of a wave of Chinese designers who chose to study or show their collections in London or Paris, it is only recently that Chinese designers have started showing on-schedule. Xu Zhi was recently nominated for the LVMH prize and discussed his hopes that a Chinese designer will win the award in the future.

The panel all shared their thoughts on the similarities with the wave of Japanese designers in the early 1980s who had a global impact, including the likes of Yohji Yamamoto and Issey Miyake - a comparison that has been frequently encountered by the panel. Other common comparisons were noted, such as whether China Fashion Week could be the next Paris Fashion Week, whether a Chinese brand could be as well-known as Chanel? Susie posed the question whether these comparisons or goals are healthy, to which Chairman Zhang responded that it was natural to compare but in reality it is much more unpredictable due to the changing global landscape, noting that 'change is the only certainty'.

The China Changing Fashion Forum was supported by the Foreign & Commonwealth Office’s China Prosperity Fund 2016/17 as part of a wider project on Fashion Skills in China.

The Southbank Centre's China Changing festival is a cultural platform for the exploration and celebration of modern China and its creative connections with the UK that will showcase the most interesting artistic work and contemporary thought from across China.