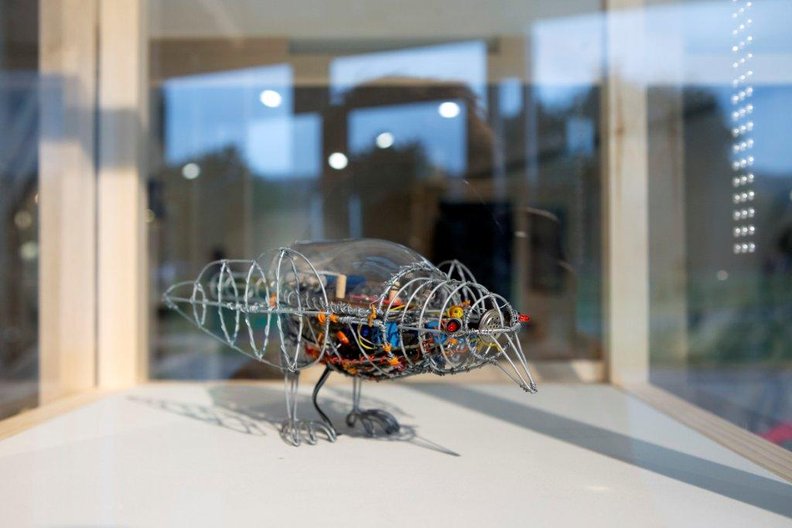 An exhibition documenting the next stage of the African Robots project by South African artist and researcher Ralph Borland launches this Thursday evening at Machines Room at Limewharf, part of the Maker Library Network.

Wire work is a form of South African street art that makes skilful and economic use of cheap materials such as fencing and telephone cables to create intricate sculptures. The African Robots project catalyses innovation in these practices through introducing cheap interactive electronics such as LED lights and small motors to the wireworkers, empowering them to expand their skills to create new hybrids of local craft and global technology in the form of charming kinetic sculptures.

The first prototype, Starling 1.0 was exhibited at the launch of the Maker Library Network at Design Indaba in Cape Town in 2014. Running on a mobile phone battery, this mechanical bird incorporates a sound synthesiser, glowing LED eyes and a moving head and wings. The second incarnation Starling 1.1 is currently on display in the Maker Library Network exhibition at Vitra Design Museum Gallery.

Ralph Borland has partnered with Daniel Hirschmann of London-based Technology Will Save Us to scope the development of the next stage of the project. They will be exhibiting their work in progress at Machines Room until 3 September.

African Robots is supported by the SA-UK Seasons programme, a partnership between the Department of Arts and Culture, South Africa, and the British Council.