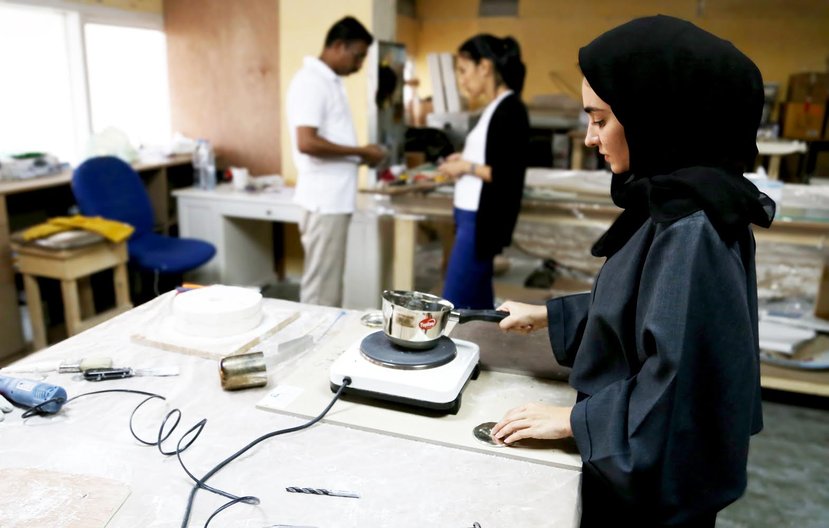 Kholoud in the studio working on her piece 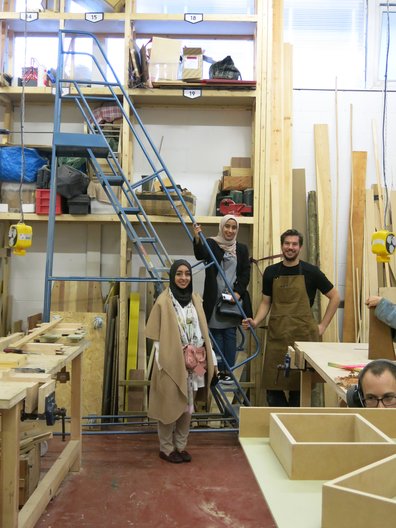 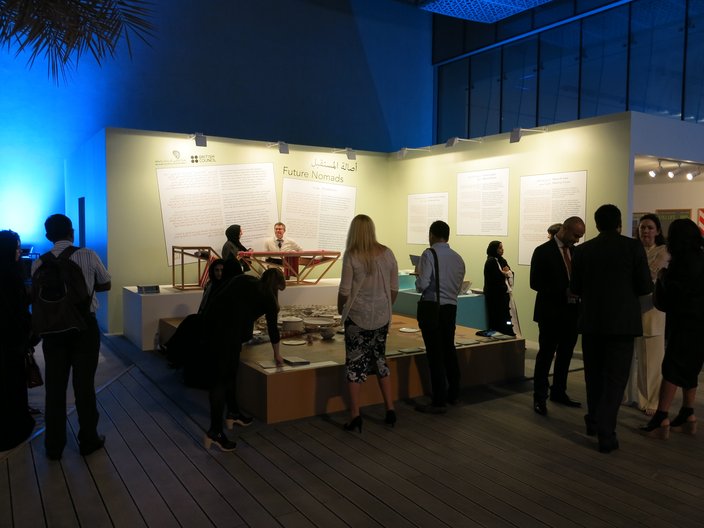 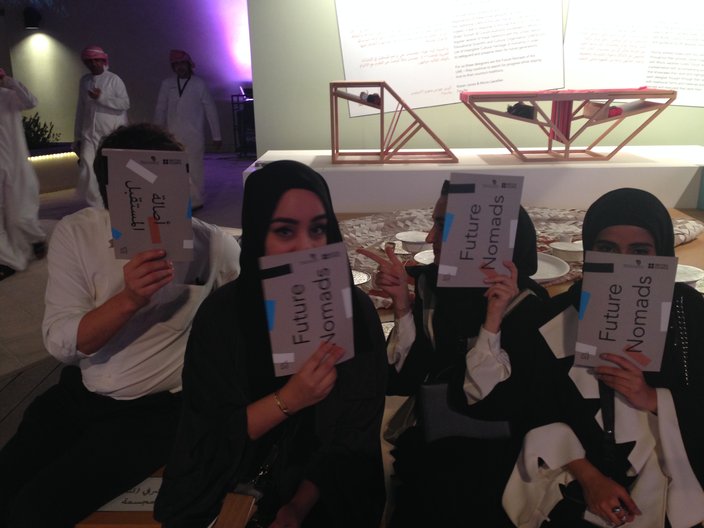 Kieren Jones and the designers at the Future Nomads opening 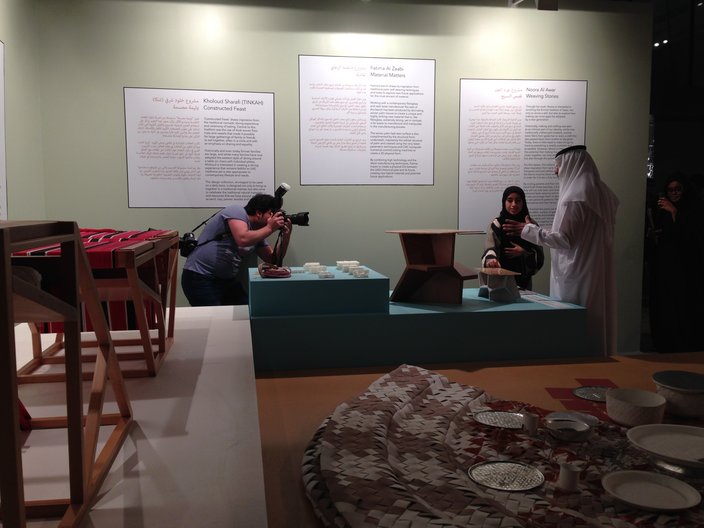 A visit to the Future Nomads exhibition by the Sheikh 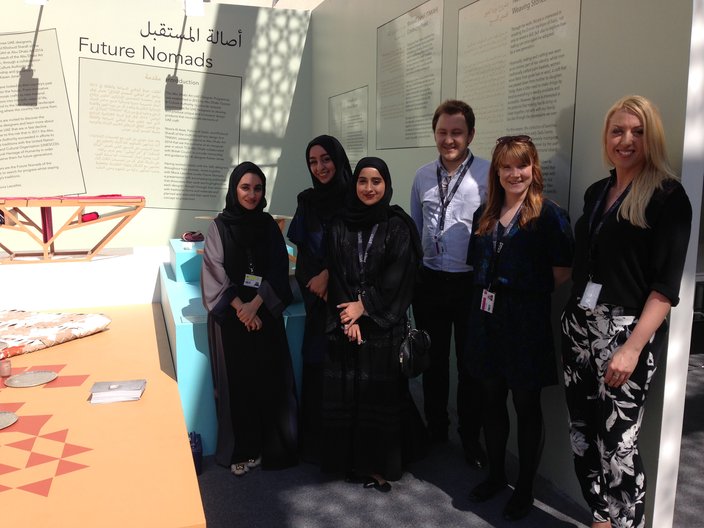 Noora Al Awar, Fatima Al Zaabi, and Kholoud Sharafi of the inter-disciplinary design firm TINKAH, present products at Abu Dhabi Art 2014 that are the outcome of an inaugural year in which TCA Abu Dhabi collaborated with British Council to provide mentorship and guidance by UK designer Kieren Jones.

Having worked closely with the UAE designers throughout their process, Jones together with Moira Lascelles curates Future Nomads, a presentation with accompanying publication that showcases their work and highlights how each designer thought through their encounter with traditional forms and materials and planned and executed their work from concept to production.

Working with palm leaves to weave products such as baskets, household items and even fishing boats, dates back some 7,000 years. An integral material to nomadic cultures, the palm tree was used to create everything from shelters to vessels. The leaves of the palm tree are sun dried before fibres and threads can be created for weaving. The tradition and necessity of working with palm trees has slowly diminished as Emirati culture has fast evolved. Now, the craft is being kept alive by groups of a few UAE artisans who still have knowledge of this craft technique.

In 2014, the United Arab Emirates was named as one of the top 10 super yacht-building nations, with 18 yachts over 24 metres in length currently under construction in the county. One of the largest companies working to create these super yachts is Gulf Craft who employs over 2,000 people across three facilities (two of which are in the UAE). Using complex manufacturing technologies such as sandwich construction and vacuum infusion processes these industries are highly advanced and highly respected within this industry.

This bench draws its inspiration from traditional palm leaf weaving techniques and looks to explore new future applications for this most ancient of material.

Working with a contemporary fibreglass and resin boat manufacturer the seat of this bench has been produced by laminating woven palm leaves to create a unique and highly striking new material that is, like fibreglass, extremely strong, yet in contrast, is far easier to manufacture and manipulate in the manufacturing process.

The woven palm-leaf resin surface is also complimented by the structural form underneath, inspired by the cellular structure of palm and created using the very latest parametric techniques and CNC (computer numerical control) cutting machines to create a 3D physical form.

By combining high technology and the latest manufacturing techniques, I hope to create a physical link between the UAE’s historical past and its future, creating new hybrid materials and potential future applications.

Historically, the people of the Gulf lived a nomadic existence moving across the desert, stopping on occasion to take shelter, rest and feed. Before 1960 the Trucial States that later came together to form the United Arab Emirates only had a number of small towns and villages. Otherwise the culture of the region was made up of either semi-nomadic or nomadic communities.

Meal times are a social occasion and are seen as a time when family and friends come together. Food is traditionally prepared on an open fire and eaten by hand without the use of cutlery. Dishes are often presented on a large circular platter with those partaking sitting in a circle on the sand or on mats – this format places an emphasis on sharing and equality.

‘Constructed Feast’ draws inspiration from the traditional nomadic dining experience and ceremony of eating. Central to this tradition was the use of thick woven floor mats and vessels that made it possible for large gatherings of family or friends to eat together, often in a circle and with an emphasis on sharing and equality.

Historically and even today Emirati families are large, and whilst many families have now adopted the western style of dining around a table on chairs with individual plates, I am interested in creating a dining experience that remains faithful to our traditions yet is also appropriate to our contemporary lifestyle and needs.

The design collection, envisaged to be used on a daily basis, is designed not only to bring us together in a traditional manner, but also aims to celebrate the traditional natural materials and resources that we have around us, such as sand, clay, pewter, textiles and leather.

Sadu weaving is a UAE craft traditionally carried out by women and passed on from generation to generation. In the past, women would gather in small groups and weave whilst narrating family stories or reciting poems or singing songs. Sadu weaves are usually made from brightly coloured strings (common colours are black, white, brown, beige and red) woven together on a special wooden loom to create embroidery for adorning clothes, furniture and decorative accessories. Weaves were also in the past used to make tents in the desert.

Sadu, however, is fast in decline and in 2011 it was added to the United Nations Educational, Scientific and Cultural Organization (UNESCO)’s List List of Intangible Cultural Heritage of Humanity in order to support the survival of this traditional craft,. Only a small number of women in the UAE still uphold this tradition and the skills are not currently being passed on to future generations.

Through my work, I am interested in revisiting the Emirati tradition of Sadu, not only to revive a lost skill, but also to explore how making can once again be adopted by a new generation.

Historically, making and crafting was seen as an intrinsic part of our identity, whilst men traditionally crafted palm baskets, women wove fabric from goats hair or wool, a craft that was passed down from mother to daughter. Today, there is little need to make things by hand as everything is readily available and accessible. However, I am interested in the potential that making has to bring us closer together, not only with our family, but also through the possessions we own.

For this reason, I have designed a collection of benches that draw inspiration from early Sadu looms. Designed and sold deliberately incomplete, the bench must be hand woven by the user in order for it to be a fully functional object.

By inviting parents and their children to hand finish these benches, it is hoped that they will not only learn and re-engage with traditional Sadu weaving techniques, but will also encourage them to develop their very own personal patterns. Patterns specific to themselves and their family.

Once finished the piece can be used as a coffee table, a place of gathering and imparting stories and knowledge. I hope that these tables will not only encourage families to work together but also ensure that making is once again at the heart of the family.

Fatima Al Zaabi comes to design from an architectural background having graduated from the American University of Sharjah. With a keen interest and passion for computer-aided design and contemporary manufacturing technology, Fatima is always looking for ways to merge her knowledge and sense of materials with contemporary processes. Her recent collaborators include FN Design, WTD Magazine and Bloomingdales Dubai. Fatima was recently selected to present work at Design Days Dubai in 2014. Fatima currently lives in Sharjah and works in Dubai.

Kholoud Sharafi is a Dubai-based multi-disciplinary designer. Since graduating in 2008 with a degree in visual communication from the American University of Sharjah, Kholoud has explored the fields of typography, textile printing and silversmithing through her work. In 2012, Kholoud formed a collective known as TINKAH under which she now creates most of her work. Kholoud’s work has been shown at the Barjeel Art Fondation and The Jordon National Gallery of Fine Art and her work is part the British Museum’s private collections and has been sold at Sotheby’s in Doha.

Noora Al Awar graduated as an architecture design major from the American University of Sharjah in 2013. She currently works as both a product and architectural designer and has a keen interest in the way design processes can be applied to contemporary ways of life. Noora’s work often stems from her love of art and painting, a discipline she continues to use to explore her creative practice resulting in her being shortlisted in 2013 for the Sheikha Manal Award for a self-portrait oil painting. In 2012 Noora produced an interactive installation for TedxYouth Jumeira entitled "e3br w3abber" that looked to encourage youth freedom of expression and individuality and in 2014 her Barjeel stool was exhibited at Design Days Dubai.