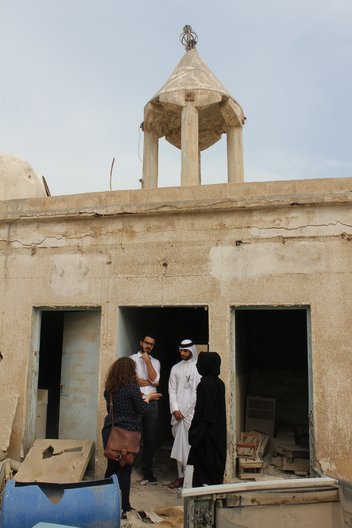 The Old Doha Prize recently bought together sixteen architects and urban designers based in Britain and Qatar for an intensive one week design charette in Doha, from 17-24 November 2013.

Following a design brief, teams were asked to research the neighbourhood of Al Asmakh in Doha, and deliver a contextual design response for the area which conveyed an  approach to heritage-led regeneration which could be relevant to the future of Old Doha. While unacknowledged by many, this part of the city is also seen as a great heritage asset for Qatar, and a key element of the city’s historic narrative. Although the infrastructure only dates back seventy years, it forms an invaluable link with the past for a city transforming rapidly. The new developments surrounding this area presents both opportunity and a profound risk for this district - located in the very centre of the city - as rising land values and new zoning threaten the dilapidated, low-rise structures of the past.

The aim of the Old Doha Prize was to gather innovative new perspectives and voices to examine the identity, value, and potential futures of this piece of the city; what it is today, and what it might become.  The charette week also aimed to bring together professionals from two different contexts, to share experience and knowledge through collaboration, and create lasting bonds and the potential for future work and engagement.

Look out for upcoming posts which explore the four team proposals and their experience during the Prize week. Below is a roundup of how the week unfolded, and the exciting outcome of the Prize.

UK and Qatar participants were paired up to form teams who, despite having never met previously, went on to work intensively together over the coming week. Teams had just a few days to research the area, formulate ideas and develop potential proposals to take forward. Many in-depth and creative discussions followed that fused previous experience, local knowledge, and outside perspectives.  Key observations and overarching themes arose across the groups which echoed throughout the week and into end proposals. These included the importance of threshold, the definition of public and private within Arabic culture and its reflection in traditional housing design, engagement in and with the street, high-rise versus low-rise and relationship between buildings, the importance and potential lack of defined public or informal gathering spaces, the courtyard aesthetic, and issues of access, transport and parking, including what potential the area has as a promoter of the ‘walking city’.

The competition provided a platform for participants, local professionals and the public alike to address some key questions about the past, present and future development of the city. A mid-week crit attended by a range of architecture, development and planning professionals from Doha, sparked lively debate and provided teams with important peer to peer feedback. A public lecture and panel discussion between Dr Suad Al-Amiry of the RIWAQ Centre for Architectural Conservation, Prof. Nasser Rabbat of MIT, and Prof. Thomas Leisten of QMA addressed some key issues of contemporary heritage practice (you can read more about the event here). These discussions highlighted some of the key complications faced when addressing the future development of Doha. Can those institutoipns defining the city’s future work together to  produce practical and economically viable developments whilst respecting the history and character of the area?

After a lot of hard work (and a good handful of sleepless nights later), all the teams produced an amazingly varied and impressive amount of original and quality work. On the day of judging, the panel were hugely impressed with all the proposals and presentations. Not a single project was lacking when it came to creative and ground breaking ideas and, while overarching themes emerged, each team’s proposal was unique and creatively executed. Following final deliberations however, a winning team was selected.

The winners of the Qatar UK 2013 Old Doha Prize were Fatima Fawzy, Alicja Borkowska, Alaa Larri and Iris Papadatou for their project ‘Learnings from Old Doha’. Their collaboration presented an innovative and phased development of the area of Al Asmakh and Najada. They proposed a programme to introduce education facilities and initiatives to attract people from different areas of expertise, bringing together a diverse range of users to create a dynamic and mixed use hub of activities and people. In their plans, a patchwork of courtyards found across the city are important locations for learning and socialising, hosting specific activities revolving around culture, child and adult education, sports, artisan apprenticeships, and other community binding activities. The team’s plan beautifully communicates a way in which this area of Doha could become an integrated and walkable district that would connect people to its rich history and heritage. The winning team have received a grant of £15,000 to allow them to further develop their research and ideas explored as part of the Old Doha Prize design residency as a team over the coming year. The Qatari participants will also visit the UK in June 2014 during the London Festival of Architecture.

The Prize giving ceremony was held at the Museum of Islamic Art, located on the Cornice of Doha. Designed by I.M.Pei, this setting could not have been more appropriate for the 16 participating architects and urban designers to present their work.  It was the culmination of a year of planning for the Qatar UK 2013 team and a proud moment as the teams’ success was demonstrated through their presentations and displays. Although the charette week is now over, and Qatar UK 2013 draws to an end, this is only the beginning of a wonderful initiative.

The residency has been a unique opportunity for both Qatari and British architects to work together to share their skills and vision for heritage-based architecture, and for all those involved to have real discussions about both the past and future of the city. Imagining the potential for this small piece of the city provided a rich platform to assess larger, fundamental questions about the wider development and future shape of this and other areas of the country: what works and what doesn’t, and what residents and visitors to the city really want and need. It questioned assumed preconceptions, and provided a critical and honest voice for young architects. Whilst an intense week, it was a rich environment for thinking; one open to creative research and ideas without the constraints or determined outcomes of a client brief,  but with outcomes that have contributed to a real contemporary discussion about potential future narratives for this area and the surrounding  city.

The four teams were:

The faciliting team were:

The judging panel were:

The British Council and Qatar Museums Authority would like to thank Msheireb Properties, the RIBA, London and The Bartlett School of Architecture for their support in this amazing project. We would also like to thank all the passionate individuals from Doha Architecture Forum who gave so much of their time and expertise.