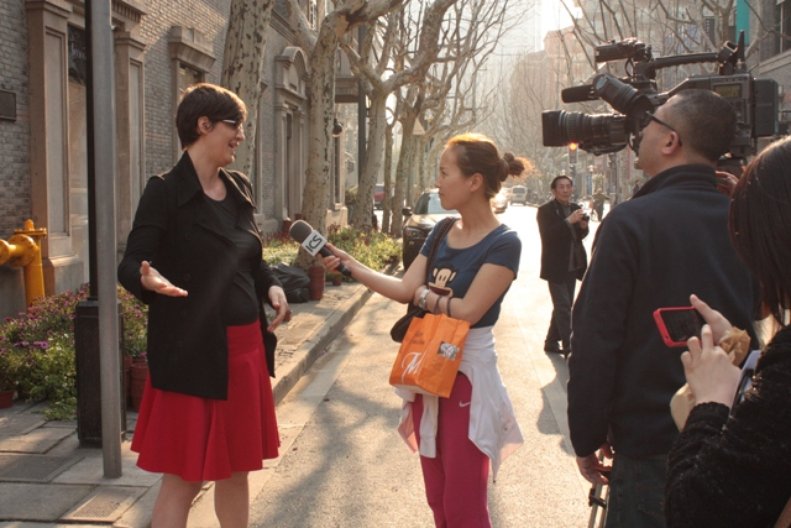 Antonia Faust, Projects and Events Manager at RIBA London shares the inside story on the first stages of the Play Your Style project:-

Following a fantastic first introduction to China on our initial research trip to Shanghai in February, we returned at the end of March with 9 RIBA architects to kick-start the Shanghai Windows Project ‘Play your Style’, one of the UK Nowprojects.

Based on the RIBA model for the Regent Street Windows Project, the China version partners London RIBA Architects with retailers in Shanghai’s Xintiandi and Xintiandi Style to create a series of architectural installations in the windows and public spaces of this popular Shanghai destination.

Having already established a great relationship with our British Council partner Christina Chen and the lovely team at Shui On Land in our inaugural visit, we were looking forward to introducing our 9 selected architects, a range of emerging and more established practices, to the 9 retailers they would be working with.

Our first impressions on day 1 may not have been fantastic, as we arrived to our first meeting with our partners straight off the red-eye overnight flight. Our hosts kindly ignored the occasional bobbing of exhausted heads.

But composure and energy levels were revived as we took a tour of the shopping centre and showed each of the architects which store windows they would be working with, and finished with a fascinating tour of the Shikumen House Museum.

Shanghai Xintiandi inhabits old 1930’s Shikumen-style residential blocks, converting them into a multifunctional dining, retail and entertainment centre flowing with restaurants, boutiques, cafes and bars of an international standard. The Shikumen buildings retain the antique walls, tiles and exterior of the Shikumen housing of old Shanghai, while the internal spaces have been renovated for modern use. The Museum retains one of the Shikumen Houses to its original form, which at one stage would have housed up to 15 families.

It was hard to do anything except grin from ear to ear when entering the hotel where we would be spending the next 4 nights, courtesy of Shui On Land. The Langham Xintiandi is pure luxury and exactly the place you want to be having been awake for 36 hours straight. The toilet alone was something of a marvel – the lid automatically rising on approach and with more buttons to control the various wash options than that of your average hi-fi system.The buffet breakfast, where to start? Safe to say one could easily have ate one’s own body weight every morning and gone back for seconds – there wasn’t a single cuisine that had been left out from the array, amazing!

The following two days was a blur of back to back meetings between architects and retailers and press interviews. If we weren’t in a meeting room we were on site with a film crew.

What struck me, and several of our congregation who hadn’t been to China before, was the challenge of reading the response in meetings. As well as the language barrier, body language was also difficult to gauge. I had been advised previously that in China ‘yes means yes, but yes also means no’. There were several occasions when all through out a presentation, a retailer would listen with a poker face and no sign of agreement nor displeasure, then at the end give a very brief smile and ‘yes;’ leaving the presenter unsure whether they really liked the scheme or not.

This was all made clear in our final wrap up meeting with our partners at Shui On Land, who informed us that all of the retailers were very happy and look forward to the ongoing collaborations. Under the theme of play, these impressive schemes include giant Mikado sticks framing the entrance to a shop, a live interactive racetrack and a public pavilion with sweeping chains of gold.

To celebrate the successful unions, we were treated to a stunning meal at the Xintiandi One Club House. Every mouthful was pure heaven (Xintiandi means between heaven and Earth so the food was perfectly placed!).

There was only one last thing to do now that all the hard work was done - celebrate in style with a group Karaoke session! There were some incredible performances, and I wouldn’t be surprised if the interview process for getting a job at Shui On Land involves some kind of audition - the girls were very impressive. Sadly the video footage has been destroyed, but perhaps it’s best that what happened in Shanghai stays in Shanghai.