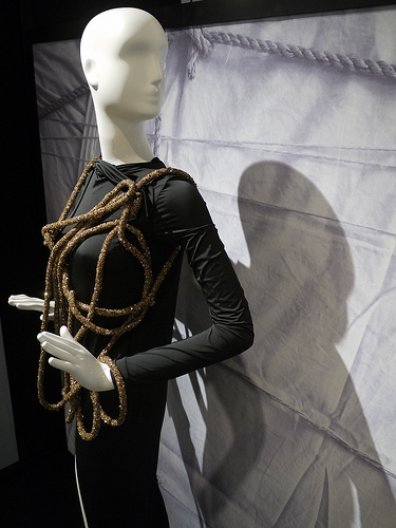 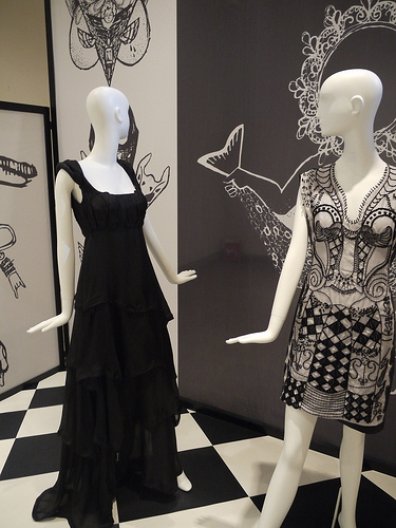 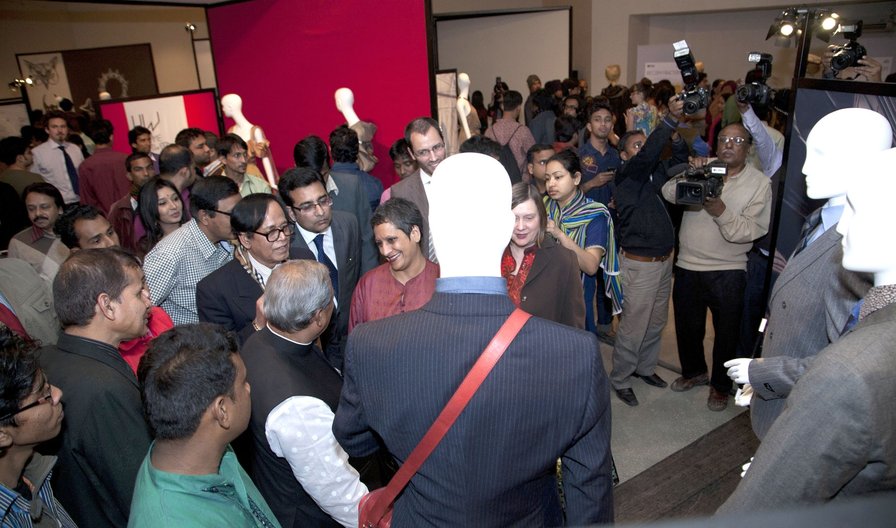 The Minister of Culture at the inaugural ceremony 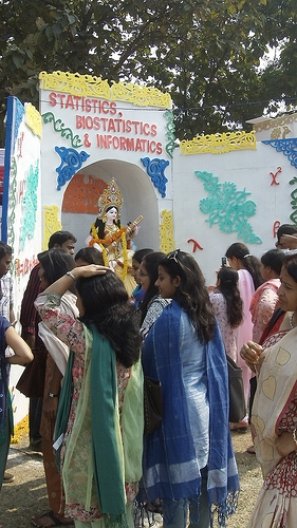 Hindu Festival to the Goddess of Knowledge 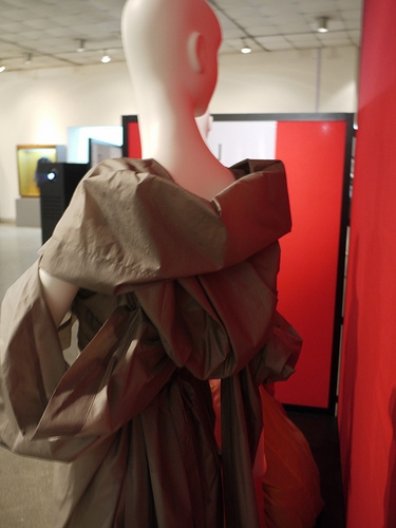 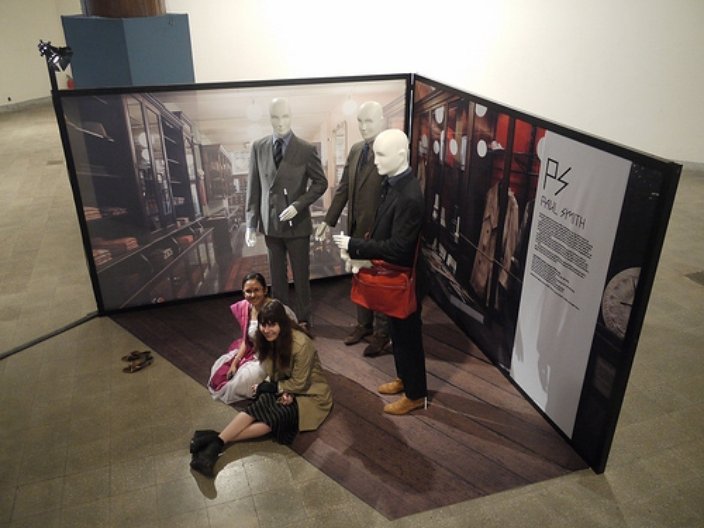 Me and my lovely guide Proggna 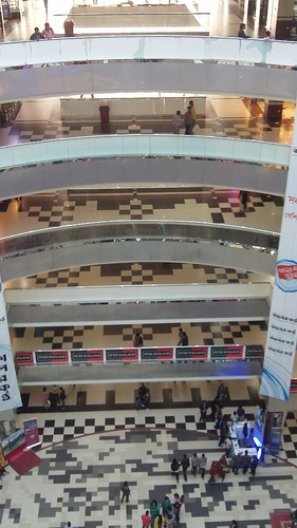 I'm back at my desk in London now and finally beginning to feel like a true British Council worker.  This means there's a hot pink top from my salwar kameez peaking out from beneath my jumper.  Immersed in the colourful and delicate sarees and salwar kameez of Dhaka in Bangladesh, it was hard to resist the temptation to get a few for myself while there.  It seems to make sense to collect clothing in each country I visit as I tour the fashion exhibition Reconstruction, which is travelling around Central and South Asia and consists of the work of 7-UK based designers who reference their cultural heritage, traditions and personal memory in their work. Perhaps one day like the designers included in the exhibition, I can use my memory of these visits to create my own collection (of course, first I'd need to be a fashion designer to do this, but one can always dream).

Considering that something like 60% of Bangladesh's export earnings come from the garment, apparel and knitwear industries, it was tremendously interesting to wander the streets of Dhaka contemplating what fashion means to the Dhaka-ites.  At a Hindu festival to the goddess of knowledge surrounded by women in vibrant and elaborate sarees, I wondered how any of them could possibly be interested in Western fashions.  The opening of Reconstruction proved me wrong.  Crowds flocked and the pieces by Vivienne Westwood, Paul Smith, Hussein Chalayan, Marios Schwab, Osman Yousefzada, Sophia Kokosalaki and Peter Jensen and stared curiously.  Equally though, crowds flocked around the 6 pieces displayed alongside by 3 renown Bangladeshi designers.  Everyone was simply interested in the things that go on the body, and why not? This country clothes a lot of people in the world.

There were some similarities between these seemingly separate worlds.  The exhibition was staged at the Bangladesh National Museum, who very kindly installed an exhibition of their collection of traditional Bangladeshi textiles, including jamdanis and maslim, and royal dress.  The details of these delicate pieces appeared mirrored in the work of the UK designers.  The careful beading of the Peter Jensen and Sophia Kokosalaki pieces could have been inspired by the beaded jacket of a young Bangladeshi royal 100 years ago.  These small traces served as a reminder of the interconnectedness of fashion and the voice it provides for a world dialogue and historical reflection.

I delivered a talk on fashion exhibitions in the UK at the opening to a boardroom full of museum officials, press and designers alongside the historian Professor Niaz Zaman, who has recently contributed to an encyclopaedia of South Asian dress.  Her comments on the history of Bangladeshi dress in Western fashion seemed to resonate with my overall sentiment of the current relationship.  She spoke of Regency women in muslin dresses and paisley shawls.  While these things were one of the major products of Bangladesh at the time, they were never actually popular in Bangladesh.  She spoke of the desperate need to record and document Bangladeshi dress.  Though from a Western perspective, Bangladeshi women still appear in traditional dress, and the gentle nuances in this relating to politics, religion and social changes are not necessarily apparent.  At the end of my talk, a young designer asked me if they were to stage a fashion exhibition on Bangladeshi dress, should they focus on the traditions and historical, or on the contemporary work.  After thinking it over later, I came to the resounding conclusion that they should only consider contemporary work like the exhibitions I referenced in my talk.  Like the designers in Reconstruction, their heritage, traditions and memories are inherent in their work, and I can go down to the V&A every day of the week to see their collection of historic South Asian art and design.  I came away wanting to understand fashion in Bangladesh now and to see an emerging design industry with an appreciation of their history and traditions rather than an interpretation of east meets west.

It was fantastic to hear the speeches at the inaugural ceremony from Abul Kalam Azad, Minister of Cultural Affairs;  Prokash Chandra Das, Director General of the Bangladesh National Museum; and Rosemary Arnott, Director of British Council Bangladesh.  There was something incredibly forward-thinking and encouraging about them.  Of course, Bangladesh is still settling following its independence and things are still very much early days, but they seemed to suggest that a continued and expanded conversation on fashion with the rest of the world is needed and that Reconstruction is a first step.

To help promote this communication, we also sent blogger Rachael Oku of Creative-Idle, also associate editor of the online magazine Six, to lead a fashion journalism and blogging workshop with local journalists.  One of the main problems separating the UK and Bangladeshi industries is a lack of information.  I might recognize the nuances of Bangladeshi dress if I could see more of it.  I want to see more of it!  As much as I don’t want to admit it, the internet is an amazing tool for documenting and sharing things.  Professor Niaz Zaman invited the Museum and the British Council to document Bangladeshi dress, but I think it’s actually up to the emerging designers, journalists and fashion enthusiasts.

Now I’m really going to sound like a British Council worker – at the end of the day Reconstruction is about cultural relations, so I do hope it will encourage both industries to look to each other instead of working blindly for each other.

Check out some of the articles in Dhaka on Reconstruction here and here!

The exhibition has been curated by Alison Moloney, British Council London, and designed by Nissen Richards Studio. The graphic design was by studio Kellenberger-White, which developed a new typeface in response to the sharp, angular lines of the exhibition structure. The British Council is delighted to be collaborating with leading high-end mannequin manufacturer Bonaveri who has generously provided 16 Schläppi 2200 mannequins for the exhibition's tour.