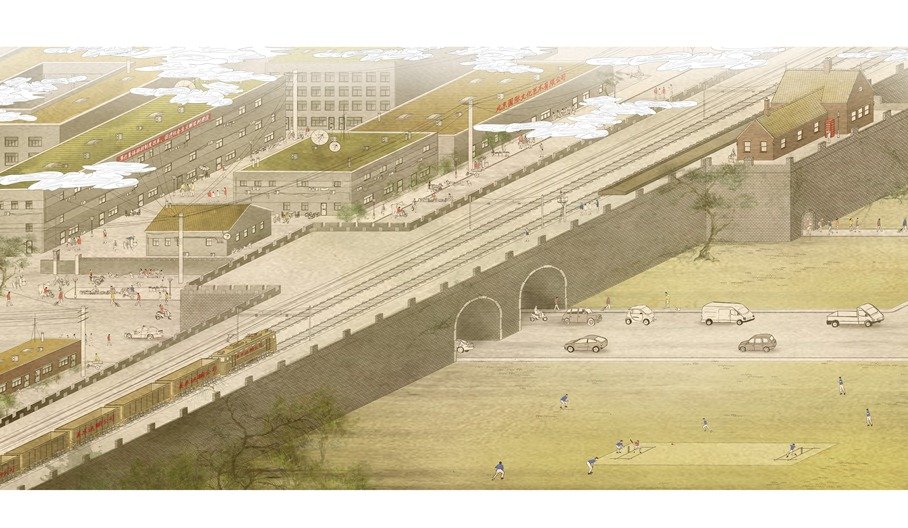 Darryl Chen studied Caochangdi, an atypical ‘new socialist village’ on Beijing’s Fifth Ring Road with a thriving and diverse mixed-income community. Amongst the city’s singularly masterplanned mega-developments, Caochangdi is an anomaly. In the space created by the Chinese government’s evolving planning laws, the village’s growth is driven by the instincts of local peasants and the bohemian opportunism of artists who have established a set of unstated rules governing urban form.

The Localism Act of 2011 provides the biggest opportunity in decades to rethink the role of planning. Chen argues that the time has come to breathe new life into the idea of the village by eliminating townscape sentimentalism and recovering economic growth as the primary driver of urban form. Chen’s project questions the seemingly one-way importation of Western ideas and expertise into China by asking, what can China teach the UK about planning

Why did you want to be part of Venice Takeaway?

This is a forum for the best architectural ideas rather than the best work of a subjectively selected group of architects. The pavilion is showcasing game- changing ideas at a time when we desperately need to stimulate new thinking and new approaches to practice. Considering today’s economic climate, this seems more relevant than indulging in retrospectives.

Where did your idea come from?

My idea sparked from frustration with the planning system and the arbitrary hurdles it makes you jump through. In the UK, I’ve noticed a kind of love of anomalous detail, which is both brilliantly distinctive and maddeningly frustrating. The Chinese, on the other hand, are able to unlock urban intensity and economic opportunism at a time when they’ve become more open to new ways of doing things.

How are research and exploration important to your practice?

Design doesn’t come from thin air. Research enables a platform for a design idea to take flight. The most interesting propositions come from taking found, sometimes unexpected, phenomena as a starting point, and asking ‘what if?’ I find that exceptions to norms often say as much, if not more, about a society than intentional urban design. Consequently, I’m interested in the fringe, the underrated, the unlikely and the sometimes perverse. Research becomes a mode of operating without the rigidity of presumed outcomes.