The Maker Library Network was launched in February 2014 as part of the British Council's Connect ZA season, connecting the UK with South Africa. It coincided with World Design Capital Cape Town , the start of an eventful design programme across the city.

Four twin Maker Libraries were set up in Cape Town, London and Edinburgh to pilot the programme and inspire others to join through an open call. At Guild Design Fair in Cape Town, Heath Nash took over the main flagship - an extensive Maker Library showcase designed by Alon Meron, with a Gallery display of British design developed in collaboration with the Victoria and Albert Museum, London. Heath brought the space to life with makers demonstrating skills including shoemaking, wire-work and papier mâché.

Also in Cape town, Maker Librarians Thingking invited London-based guest makers from Makerversity to collaborate at their busy stand at the bustling Design Indaba Fair. Together they improved the monitoring of a mini aquaponics station using Arduino.

Back in the UK, GRAS condensed the Maker Library concept to make it fit into their caravan, using their Edinburgh office courtyard as a temporary experimentation ground. This first ever mobile Maker Library notably paid a visit to a surfboard maker, hosted a matchstick artist and served as a backdrop for building large Himmeli structures with pipes.

At Makerversity in London, Maker Librarian Candyce Dryburgh learnt about Shibori and Indigo dying with guest maker Liza, a textile designer who took her through the first steps of folding and stitching the fabric right through to the final stages of making sure most of the dye has been rinsed out of the cotton.

Each Pilot Maker Library was free to adapt and scale Alon Meron’s design principles to fit their space and purpose. Heath Nash extended the makespace and populated the frames of the library with references and materials; ThingKing built a display stand with a paper backdrop and added decorative routerred poles; while GRAS fitted the frames into the back of their caravan.

On the 1st of March, the Maker Library Network was officially launched at Design Indaba. Creative Director Daniel Charny was joined on stage by Thomas Heatherwick to discuss the importance of learning through making and having a strong, eclectic studio culture. They visited Thingking’s Maker Library stand and said hello to the other Librarians online. Thomas and Daniel officially launched an Open Call on stage for more Maker Libraries to join the Network in South Africa.

Maker Library at Guild Design Fair with the V&A 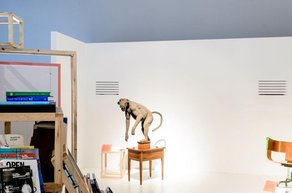 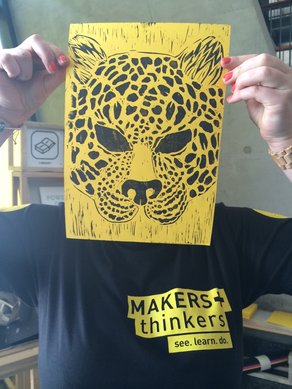 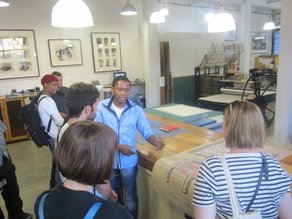