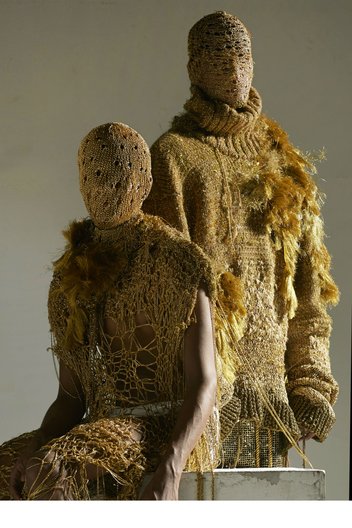 London-based, Sri Lankan designer Amesh Wijesekera is a graduate of the Academy of Design Sri Lanka. First discovered at the Mercedes-Benz fashion runways in Colombo he went on to win  the Graduate Fashion Week London International Catwalk competition in 2016. He was also awarded at the Mercedes-Benz fashion and apparel awards in Sri Lanka. Amesh has worked with Future Laboratory, Edeline Lee and Zandra Rhodes, collborations that led him to showcase at Fashion Scout during London Fashion Week in September 2017, before being commissioned by sustainable design label “sri” launching in New York this year.

Highlighting local craft, contemporary design and “Made in Sri Lanka” to a global audience, Amesh’s love for textile and colour is enhanced working alongside the skilled craftsmen and women of his home island, including artisan communities working in knitwear, crochet, handloom and batik. “The shared knowledge of fine craftsmanship and design innovation is vital for such industries to move forward, enabling social sustainable growth” states Amesh.

His design philosophy is to merge the physical and the emotional worlds. He explores minimal exaggerated shapes and forms with sophisticated textile combinations and detail. He believes boundaries are for the conventional, and breaking them opens up an array of possibilities; he looks at design without limitation. His work has attracted many rising stars in the art and music industries including Poppy Ajudha, Connie Constance, Kwaye and The Visionist