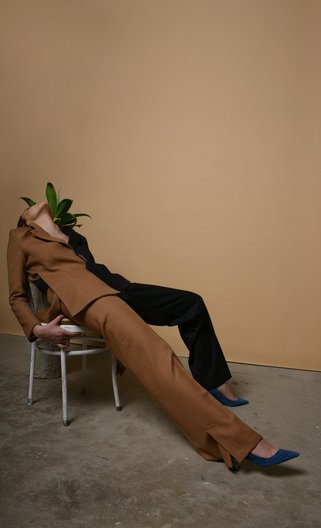 Roni Helou graduated from Creative Space Beirut in December 2016. During his three years in the institution, he took part in various exhibitions, internships and collaborations.

Roni Helou was part of Starch Foundation for two seasons, through which his collections were presented at Fashion Forward Dubai. He was awarded the Boghossian Foundation Fashion Prize for 2017, which offers a residence at Villa Empain in Brussels, where he will work on an upcoming project. The brand has been featured in prominent regional media outlets such as Vogue Arabia, Harper’s Bazaar Arabia and the National UAE and is sold at various boutiques in the region.

Roni Helou is a brand for a proactive generation, engaging in methods of  sustainability, local action and equality. He creates modern pieces that strive for originality while building an ecosystem that preserves the brand's values of sustainability, eco-friendliness and ethical  practices. Furthermore, the brand strives to be socially-conscious, not only in its production methods, which are entirely local and promote fair practices, but also through collaboration  with local artists and artisans. The brand also gives back to its community by donating 30% of its profits to Creative Space Beirut, a free school for fashion design.