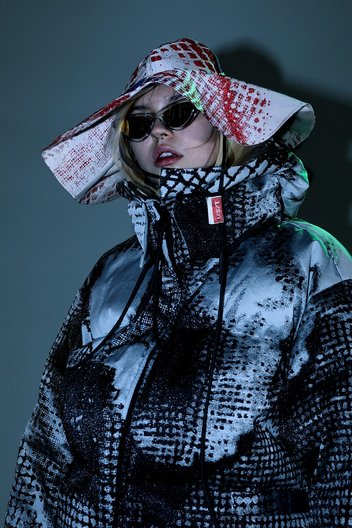 Italian label Ice Surface Temperature was founded by brother and sister Kristian and Laura Guerra. The name originates from the exact moment that ice is transformed into water, metaphorically representing a moment when one thing can metamorphose into something completely different.

Deeply rooted in underground culture I.S.T is inspired by the concept of non-places or transient spaces "a crossroads of lives, a space of contaminations, but also a way-station and setting for pluralism".

I.S.T is a projection of reality, a radical, independent and experimental perspective, which relies on the alteration of urban/social customs and the manipulation of surfaces, volumes, and colours. Ambiguity is key, through investigations into the role of boundaries, limits, and social perimeters.

Born in Padua in 1988, Kristian Guerra is fascinated by the deep relation that exists between clothing, urban culture, rugged attitude and forms of communication. He holds a degree in fashion design from IUAV university of Venice. After graduating, in 2011, Kristian was selected as a finalist in the tenth edition of the ITS contest in Trieste, winning the fashion special prize and the D la Repubblica prize. As a result, Kristian started collaborating with various brands, in the fields of both style and communication. His work is a short circuit of sense, functionality and gender mixed with streetwear and innovation.

Laura Guerra, an unconventional pattern designer who was born in Padua in 1978, has always been deeply fascinated by the relationship between human identity and the language of fashion; after years working with some of the most influential creative directors of the last two decades, such as Alexander McQueen and Miuccia Prada, she started working as a consultant for show collections and special projects. The rational part of her profession was “contaminated” by the influence of Italian counter-culture typical of the 1980’s and 90’s. Her work creates a particular empathy between clothes and those who wear them.