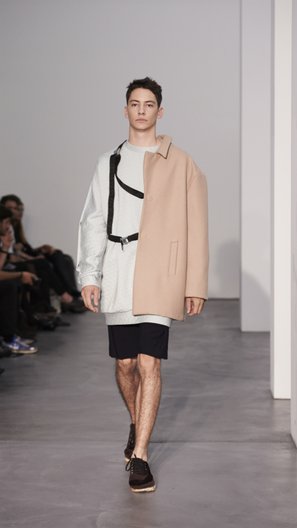 Attaining high standards is a key concept that shapes the HEAD students programme.

Throughout their course of study at HEAD-Geneva, the students are encouraged to question and to stretch the limits of their creative universe, while at the same time confronting them with the realities of the fashion world.

Julian Zigerli
Julian Zigerli’s men’s collections stand for useful, smart and technical high-class pieces with a sporty touch. There is always a lot of care, colour, humour and positivity involved in his designs.

Julia Winkler
With her collection ‘Pinky’s Dream, Watch the Room a/w 2012/13’ Julia Winkler was the winner of the annabelle Magazine award 2012 and participated in CH talents: Depicting Fashion at last year’s International Fashion Showcase by the British Council. She will present her latest designs following a year spent in Paris.

Marc Stone has developed his clothing brand as a holistic concept influenced by contemporary art, journeys, music, theatre and film. He combines classic, modern style with subtle futuristic touches. The effortless minimalist spirit of each collection comes from working with quality and hi-tech fabrics. Colours are subtle, and dictated by the feel of the season, but grey is paramount. ... It’s about stone grey.

Ginny Litscher
Illustrator turned designer Ginny Litscher graduated from Central Saint Martins in 2009.  After creating unique designs for Armani, Todd Lynn and Liberty's of London, Ginny launched her own printed scarf collection in 2011 which was worn by the likes of Lady Gaga, Keira Knightley, Florence Welch, Rosie Huntington-Whiteley and many more.

With her collection ‘Used to Take Care of My Cherry Tree’ the young fashion designer Aurélie Sutter won over the jury of the annabelle magazine award 2013. Her feminine, tailed dresses reference traditional cuts, but by incorporating contemporary fabrics and a monochrome colour spectrum she redefines the ‘jeune fille’ look for a new generation of modern women.

Claudia Zuber
Claudia Zuber founded her own label in 2009 after graduating with a BA in Fashion Design at HGK Basel and internships with Doo.ri and Kai Kühne in New York. The collections have been nominated for the Swiss Federal Design Award and Lily Award and have been shown at Fashion Days Zürich and Mode Suisse among others.