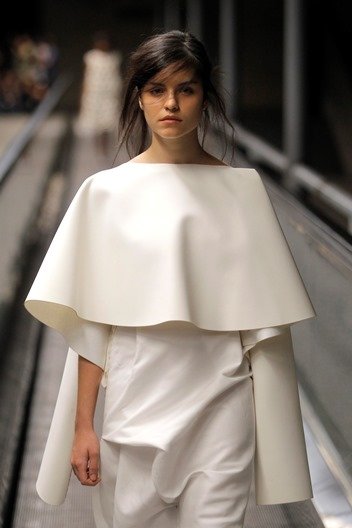 Part of PORTUGAL FASHION, BLOOM is a fresh new platform for emerging design talents. Mirroring the blossoming careers of these talented young creatives, the installation will grow with the interaction of everyone who comes to view the collection. Visitors are invited to explore the greenhouse – the central element of the installation – where a path of exquisite designs waits to be discovered. Visitors are invited to be part of the exhibition: to see, feel and encourage our greenhouse to flower and bloom while enjoying its beauty.

Designers
Carlos Couto
Designer biography After studying at London’s CSM, Carlos finished his studies in Portugal and has since worked with some big names in the Portuguese fashion industry. He won first prize in the contest L’Aiguille d’Or, Carlos currently works for Petratex, a Portuguese textile company.

Carla Pontes
CARLA PONTES addresses the minimalist language and treatment of fabrics in a simple, urban style, each piece an object for the study of design and for finding perfect shapes in third dimension; to engage with and be a continuation of the human body.

Mafalda Fonseca
Mafalda Fonseca is a young designer from Porto, who has worked for Ricardo Dourado and Luis Buchinho, some of the most renowned Portuguese brands, as well as Atelier des Createurs. Mafalda presented her first menswear collection in March 2013, at the 32nd edition of Portugal Fashion, within the young designer’s platform BLOOM. In May 2012, Mafalda was awarded with the second place at the prestigious l’Aiguille d’Or Awards.

KLAR
The creative Universe of the collective KLAR, travels within fashion, design and media art, with the aim to reach a new audience with their clean cut designs. KLAR is a young, innovative and sophisticated brand which is highly concerned with both sustainability as well applying new technologies in its designs. The combination between these new technologies and the artistic world, gives KLAR a timeless feel, where the past and the future meet.

Cláudia Garrido
Claudia Garrido is a knitwear designer from Porto who has been presenting her collections since 2012, having won many awards prior to that. This will be the second time the designer will be present at IFS.

João Melo Costa
Joao Melo Costa was born in Portugal in 1990. After attending the University of Arts in Porto, in 2008 he chose to attend CITEX School, from which he graduated in December 2011. In March 2012, Joao presented his first collection at Portugal Fashion, earning a nomination for “Best New Talent”. In September 2013 he presented his collection in London, during London Fashion Week.

O Simone
O SIMONE, is a brand of a cerebral character which expresses its authenticity by creating design solutions (toys). O SIMONE took part in the International Fashion Showcase 2013 – London Fashion Week AW14 and at the DEMO 2013 fashion show – a joint action between Faculdade de Arquitetura and MUDE, Museum of Design and Fashion of Lisbon – and FASHION FIVE 2013 fashion show in Porto.