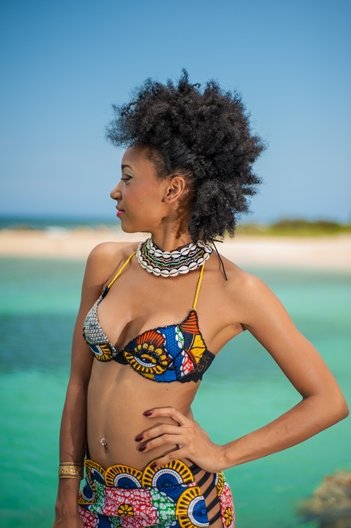 Thread Bare -an eclectic showcase featuring five emerging fashion talents - is presented against a backdrop reminiscent of Jamaica’s lush natural beauty of indigenous natural fibres and long-held artisanal traditions, fused in stark contrast with modern industrial elements – pallets, scaffolding, ladders. Jamaica is a place where intense contradictions: the traditional and modern, the raw and refined, the subtle and harsh, the harmonious and discordant co-exist. The featured designers meld these opposing elements while retaining a spirit that is truly Jamaican.

Dexter Huxtable
In 2005 Dexter began working on his brand Spokes Apparel, which officially launched in 2006. Spokes Apparel is a family  operated clothing company that is described as a fusion of unique jamaican flair  and classic European finish; the result is sophisticaiton with urban styling.

Ayanna Dixon
Ayanna has recently shown her collections at The Collection Moda 2013 alongside local and international designers where her collection E. 23 was well recieved, and she won  the inaugural First Global Bank Fashion Grant.

Claire Requa
American-Jamaican designer Claire Requa is an emerging talent and a true 'Designer Without Borders'. She takes her inspiration from her current country of residence, her heritage and colourful cultural background, and mixes this with her whimsical humour and creativity as well as function.

Simone Michelle Neilson
Self taught, Michelle uses her physical and social local environment as inspiration which is evident in the easy sihouettes common across her collections. The miSim brand is designed to allow the wearer to express themselves in style and comfort, with elements of luxury.

Abenah Adelaide Gonzalez
Abenah Adelaide is a brand of exquisitely handmade Jamaican fashion, clothing, jewellery and textiles. The line is boldly Afrocentric, yet casually tailored, influenced by the designer's eclectic taste and her vivid love affair with the exotic. At IFS2014, Gonzalez will present her first complete fashion collection.