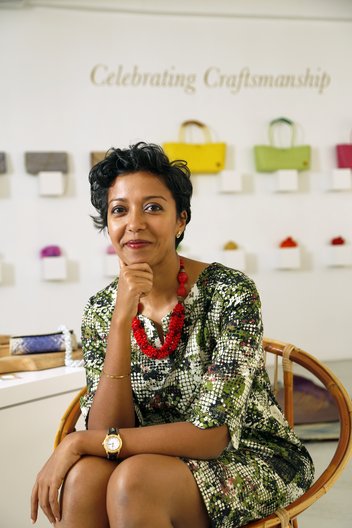 Sasibai Kimis left a successful career in the finance industry to start the award-winning social enterprise and craftsmanship focused brand Earth Heir, in February 2013. Earth Heir’s story began with a desire to empower artisans from marginalised communities, refugees and the differently abled, to achieve sustainable livelihoods. Each Earth Heir piece exemplifies workmanship with the distinctive impression of human hands with personal and cultural narratives. Earth Heir works with disappearing heritage art forms, and advocates fair trade principles and ethical partnerships. As part of its social and ecological mission, Earth Heir focuses on the sustainability of its products and supply chain, while supporting conservation organisations and those working with survivors of trafficking.

Earth Heir won the British Council and Arthur Guinness Projects Social Enterprise Award 2015 and Sasibai was one of the Wharton’s “40 under 40” award winners in 2015 and was also an Eisenhower Fellow in the 2015 Women's Leadership Program focusing on the issues of socio-entrepreneurship and heritage craftsmanship skills. She was also recently chosen as an Asia21 Young Leader 2017 by the Asia Society and is the Country Coordinator for Fashion Revolution Malaysia.

Prior to Earth Heir, Sasi was a Vice President in the Investments division at Khazanah Nasional (Malaysia), a Director in the Private Equity team at First Avenue Partners LLP (London), worked in Ghana with Opportunities Industrialization Centers International and the United Nations Development Program, and in New York as an Investment Banking Analyst at Lehman Brothers.