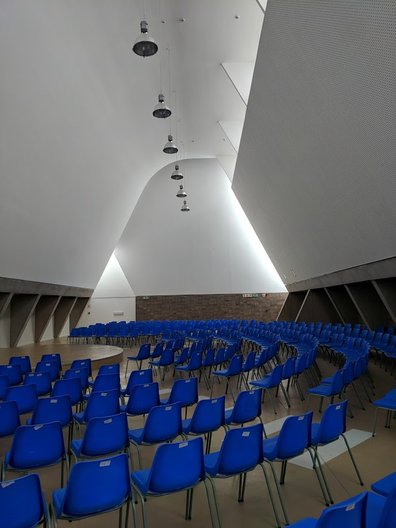 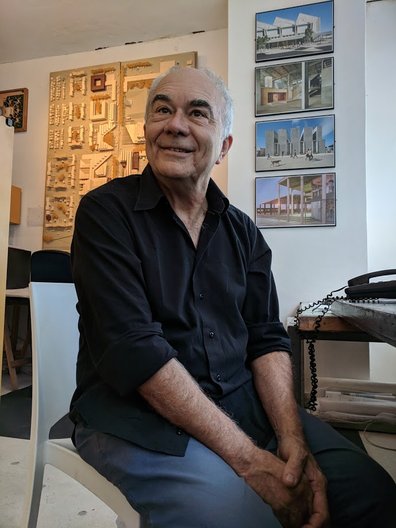 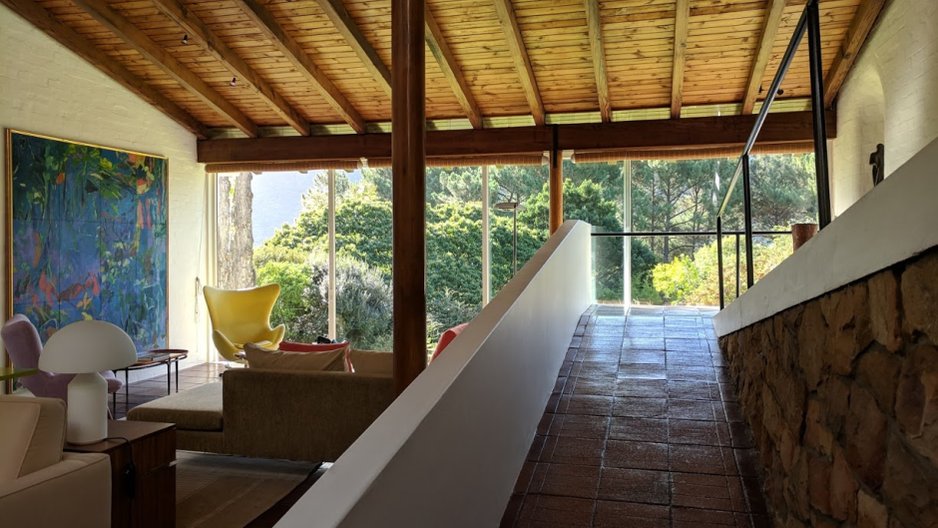 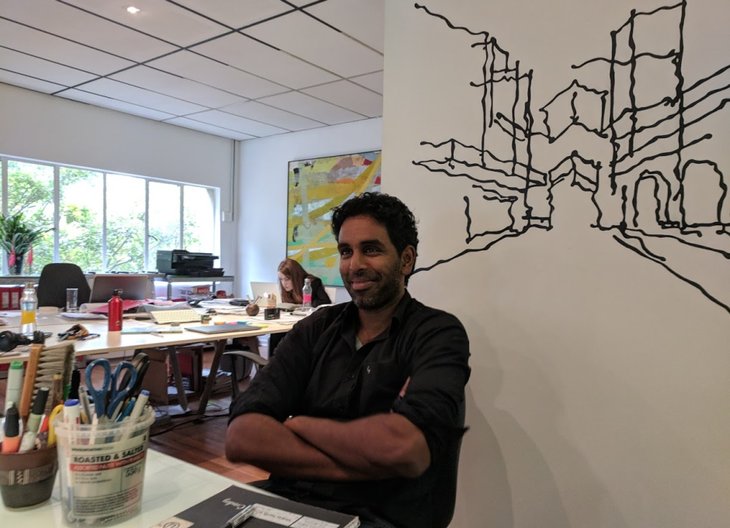 Thiresh Govender, architect Urban Works in front of a drawing by Lorenzo Nassimbeni 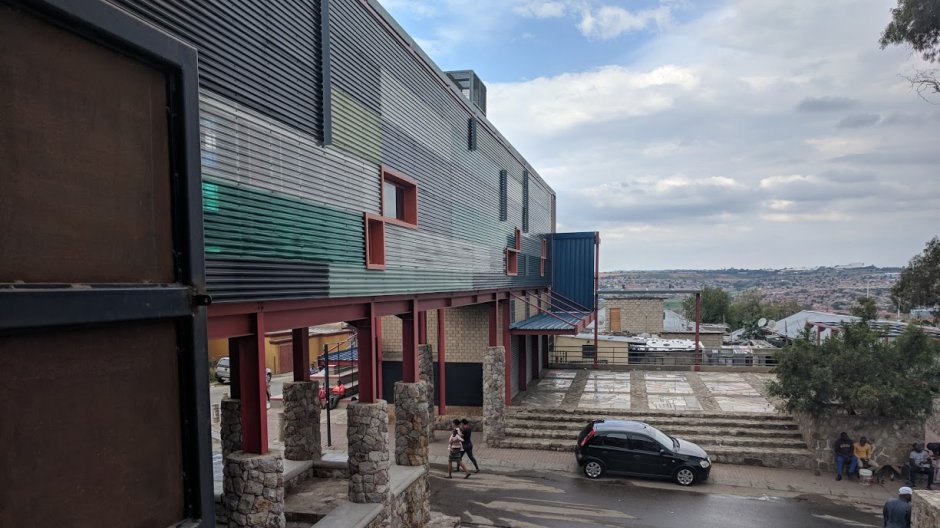 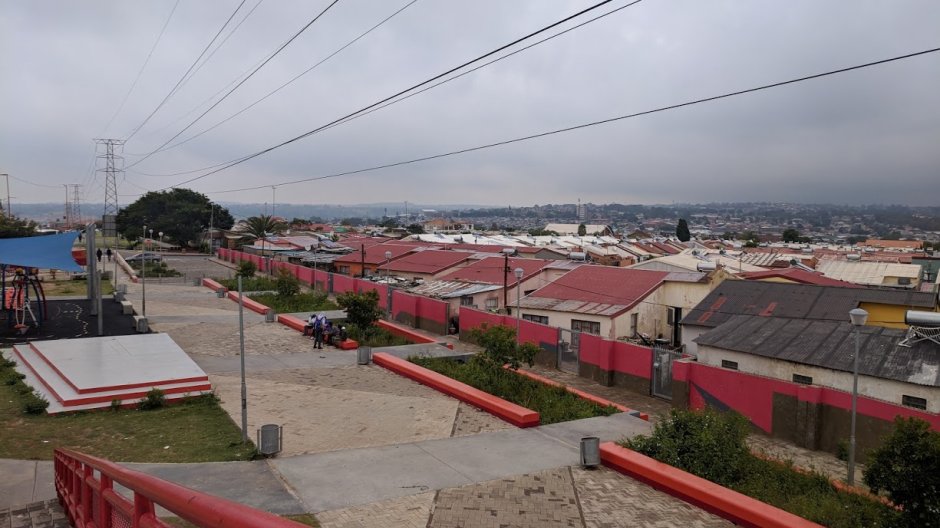 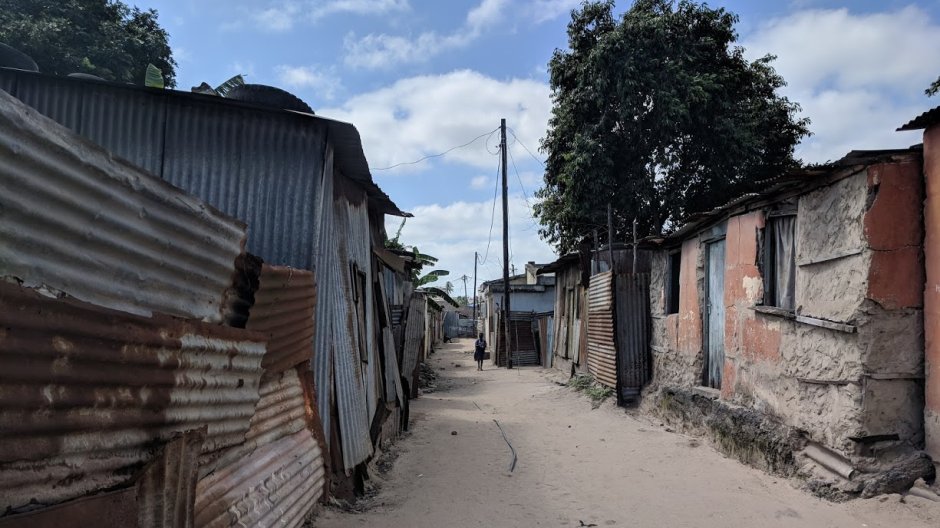 The streets of Mafalala, Maputo 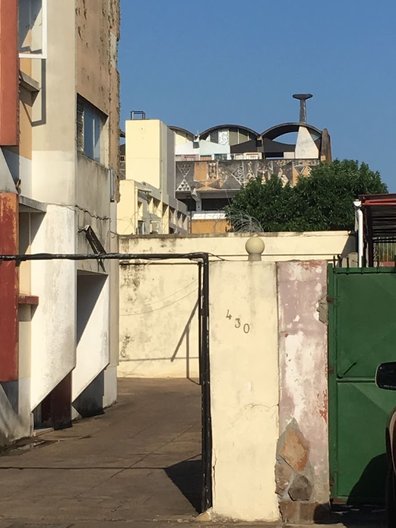 A scene from the streets of Maputo with Pancho Guedes, The Smiling Lion, 1956, in the distance

Kate Goodwin, Head Curator of Architecture at the Royal Academy of Arts, is one of the six Fellows awarded British Council Art Connects Us research grant, which supports our vision to develop stronger creative sectors in Sub-Saharan Africa and connections with the UK. Below Kate shares her  architectural discoveries from her resent travels to Cape Town, Johannesburg and Maputo.

I am still abuzz from three intense and stimulating weeks in South Africa and Mozambique as part of the ‘Art Connects Us’ programme. I went to find out more about the architectural and creative scenes and pursue an ongoing interest I have in architecture and generosity. I hoped to challenge my ideas and broaden my horizons and the trip did not disappoint. It was a complete jolt, not least because the social and political context of both countries is so unfamiliar and challenging in every sense.

The journey began in sunny and picturesque Cape Town, where I quickly adapted to the extreme water restrictions in place to stop the city going dry – a vivid reminder of the need to properly manage natural resources. But that was just one small hurdle. Twenty-five years after the end of apartheid in South Africa, issues of race, social and economic inequality and security are ever present. In conversations with the young students and established architects alike, I was struck by how they spoke of the magnitude and complexity of the problems, but maintained a sense of fortitude and a belief that architecture could make a difference.

I met with the influential architect and teacher Jo Noero who has done considerable work in black townships, most notably in Red Location, Port Elizabeth, where he is still fighting to get his museum and library opened and operational. Noero believes passionately that architects must engage in ethical issues, and while he will take on luxury house commissions will not make them any larger than 170 square meters. In a similar vein Heinrich and Ilze Wolff of Wolff Architects feel it is vital to reinstate architecture into the public consciousness and initiated events that cross art, architecture and activism. They also took me to their recently completed Cheré Botha School for SEN students where they worked for a public institution client with a limited budget and managed to create beautiful spaces that were sensitive to the needs of the occupants. Another architect who I found completely inspiring was Anna Cowen who with her partner John led a team of architects, geographers, ecologists, engineers, designers, creatives, economists, and storytellers on a project called FLOW, that looked afresh at development work to foster the wellbeing of people and places.

By way of contrast and to give me a grounding in the modernist architectural heritage of Cape Town, architect and teacher Kevin Fellingham showed me a wonderful and little-documented collection of buildings by the likes of Gawie and Gwen Fagan, Adelle Naude Santos and Tony de Souza Santos, Roelof Uytenbogaardt and Jack Barnett. While the influence of American and European modernists was evident, the buildings had a flair of originality inspired by the climate, landscape and Cape vernacular.

Johannesburg had a completely different pace and the pulse of the city matched my schedule as I dashed across town meeting architects, academics, artists, writers and campaigners, and seeing their work. In a shared office I found a great group of creatives of different generations who had cultivated an atmosphere of support and openness that fed one another’s work. These included Counterspace - a young practice led by three dynamic women who are brimming with ideas and energy, Craig McClenaghan, who has recently branched out on his own from Mashabane Rose (architects of the Apartheid Museum) plus Urban Works led by Thiresh Govender. Also in the space was Parts&Labour who called themselves project managers, but to me were just as much curators who were behind numerous projects I had seen and admired. I was impressed by the spirit of collaboration I encountered in Johannesburg and loved a project where the artist (once architect) Lorenzo Nassimbeni was invited by 26’10 Architects to create a beautiful tiled façade for their Rahima Moosa Mother and Child Hospital in an underprivileged area of the city. Likewise a collaboration he did with Local Studio (a fast rising practice) for a pedestrian bridge and park showed what some imagination and vision can add to troubled neighbourhoods.

This energy was echoed by the dynamic Lesley Lokko the head of University of Johannesburg’s Post-Graduate School of Architecture (GSA) who is creating waves as she introduces the unit system of teaching (predominate in the UK) and brings in young architects (including Counterspace and Urban Works) and artists such as Stephen Hobbs to lead the different studios.

For my final week in Maputo, the capital of Mozambique, I could not have asked for two better guides than the artists Filipe Branquinho and Mauro Pinto. Both have extensively photographed the cities inhabitants and its architecture and over the course of the week walked me through the city by day and night revealing its history and life. The architecture of the city is remarkable - expressive and varied architecture much of it built by the Portuguese during the 20th Century. Dotted throughout are the sculptural and colourful works of Pancho Guedes (1925-2015) and the thoughtful and refined work of José Forjaz. I spent two enlightening afternoons in conversation with the 82-year-old Forjaz, who took a leading role in the physical planning of the country after independence in 1975 (when there were only 3 architects in the country) and set up the countries first architecture school in 1985.

Rather depressingly much of the architectural heritage of Maputo is being lost or crumbling and the conditions for Mozambique architects today is not good. Development is monopolised by big Portuguese, Chinese and Turkish firms who import everything from design professionals to materials, and there are tight government restrictions on how local architects practice. However I met a young practice called Atelier 5 who set up in 2012 and have created some interesting corporate interiors and houses with a strong design ethos despite working in a system that for the most part doesn’t value architecture as a profession. I was also heartened to meet Anima an energised creative studio who are doing innovative work in branding, print, digital and new media, and thinking how they could create a wider network of support for the creative industries in Mozambique.

Perhaps I was lucky with who I met, but I was overwhelmed by the generosity with which I was greeted and impressed by what was being achieved in challenging situations. Everyone from the architects, artists, writers, teachers and creatives were all critically appraising what was happening around them and asking what they could do to make things better.