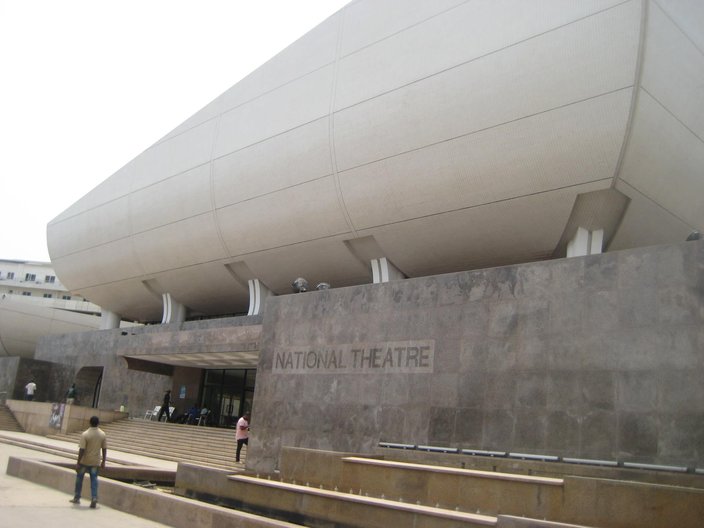 Exterior of the National Theatre 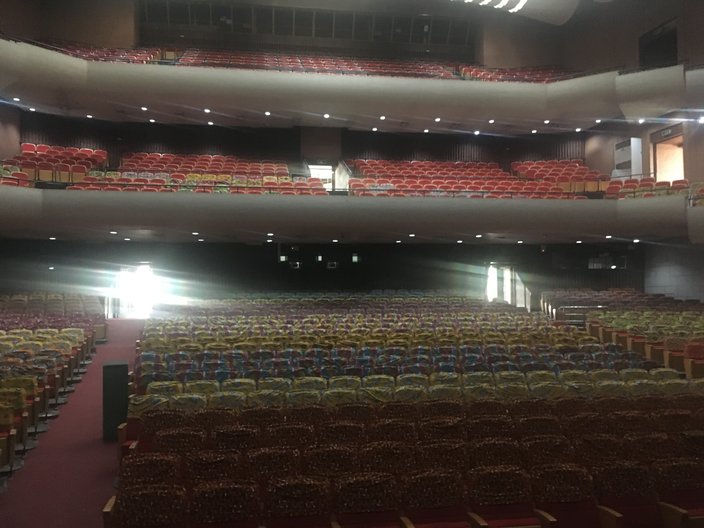 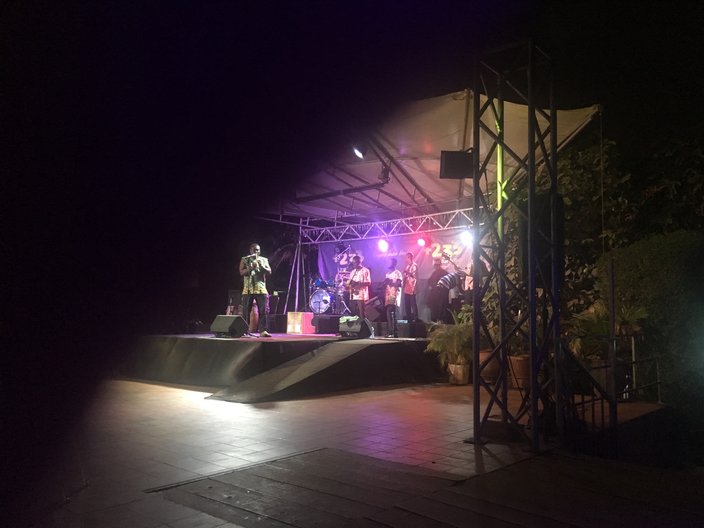 Dela Botri and his band perform at +233 Jazz Bar 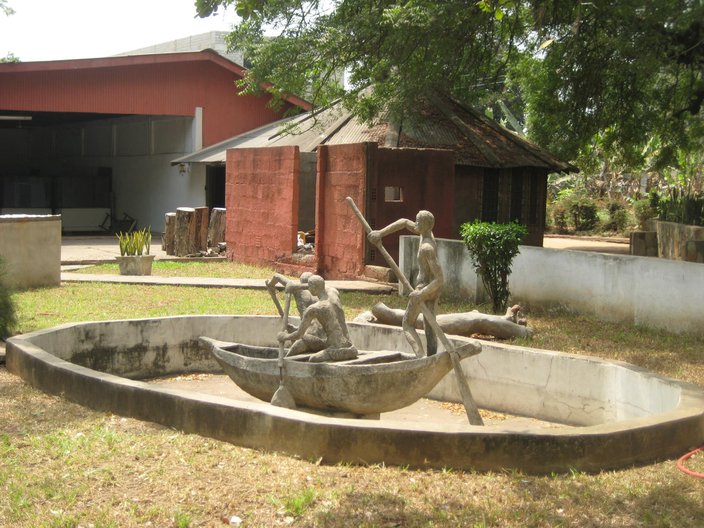 Sculptures in the National Museum grounds 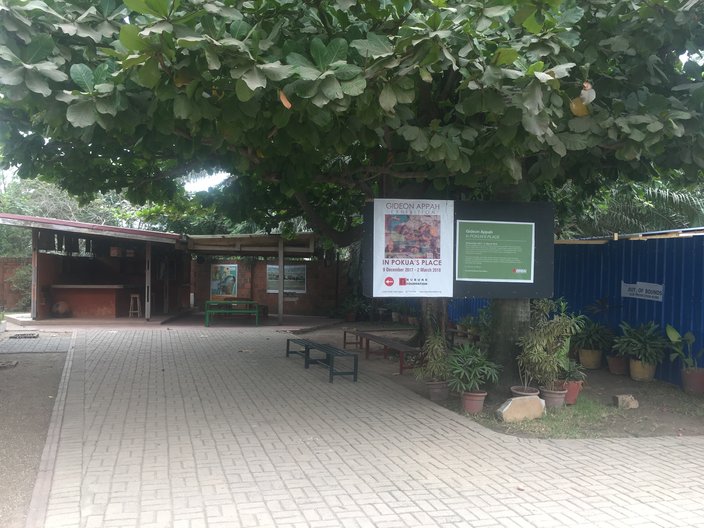 Anna Landreth Strong, V&A Curator of Modern and Contemporary Theatre and Performance, is one of the six Fellows awarded British Council Art Connects Us research grant, which supports our vision to develop stronger creative sectors in Sub-Saharan Africa and connections with the UK. Below Anna reports from her recent visit to Accra to meet with colleagues working in museums, and with music and performance collections.

This was my first time in Ghana and I was looking forward to developing connections with individuals and institutions in Accra’s creative sector and collections relating to music and performance.

I started the week with a visit to the +233 Jazz Bar, a local hub for music with concerts six nights a week. Its usual repertoire is jazz, blues and Highlife but live performances of other styles of traditional and contemporary African music also take place. Dela Botri and his 6-piece band were playing on the open-air stage to an attentive audience. Botri, founder of the ensemble Hewale Sounds, played the Atenteben, a traditional flute made from bamboo.

Firstly I met with Judith Opoku-Boateng, Head Archivist at the University of Ghana’s ‘J. H. Kwabena Nketia Archives, based in the Institute of African Studies at the Legon campus. Founded in the early 1950s by Professor Nketia, the archives contain strong audio-visual collections of great cultural significance – combining both the Institute of African Studies collection and that of the International Centre for African Music and Dance. The archive’s aim is to ‘serv[e] the needs of scholars, researchers, and artists by collecting and producing audio visual documentation on Ghana's unique dance and music traditions. The archive now covers not only Ghanaian material, but material from other parts of Africa. Judith and I discussed the synergies between the collections we work with.

I later traveled to Bokoor House to meet Highlife music expert Professor John Collins and see his museum and collection – the Bokoor African Popular Music Archives Foundation (BAPMAF). BAPMAF was founded as an NGO in 1990, championed by leading musicians who, like Professor Collins, wanted to dedicate resource and attention to the research and preservation to Highlife music. It was made publicly accessible to researchers and musicians over the following two decades. Bokoor House once operated as a recording studio – over 200 artists have recorded several hundred records there and Brian Eno was among the visitors.

Next day I visited the National Theatre of Ghana, an impressive futuristic building funded by the Chinese Government and completed in 1992. A landmark in the city, the theatre hosts international and local performances and is home to three resident companies – the National Dance Company (Ghana Dance Ensemble), the National Symphony Orchestra, and the National Theatre Company (Abibigromma). I was given a behind-the-scenes tour, and was fortunate to be able to see the 1500-seat auditorium from the viewpoint of a performer standing onstage. Upstairs, the Ghana Dance Ensemble was rehearsing. Founded in 1962 the company is closely affiliated with the School of Performing Arts at the University where it began its life and where performances are still recorded and preserved. Excitingly, I could watch a section of the rehearsal in the wooden-panelled dance studio where a female ensemble rehearsed with hemispherical calabash drums. The serene amphitheatre-like room had low banks of integrated seating and doubled as a performance space.

During my return visit to the University and J. H. Kwabena Nketia Archives on Wednesday I met with Dr Ekua Ekumah, Head of the School of Performing Arts, who provided an overview of the School and its three main disciplines – music, theatre and dance. Former student Tiffany, who now works at the University, gave me an insightful tour of the facilities and together we visited the nearby Nubuke Contemporary Art Gallery to see their latest exhibition ‘In Pokua’s Place’ by mixed-media artist Gideon Appah – an homage to his grandmother. I spent the evening at the Goethe-Institut for a concert by singer and poet Eli A Free. Illuminated by strings of lights on the outdoor terrace, his contemporary Afro Soul drew sizable crowd.

On Thursday I visited the Ghana Broadcasting Corporation (GBC’s) Gramophone (Gram) Library, which houses the largest collection of recorded music in Ghana. The library and archive is attached to the GBC’s main complex, where TV and radio broadcasting takes place. Because of this, there is a constant stream of material for the Gram Library to collect from Radio Ghana’s back-catalogue of shows. Today it contains tens of thousands of records from Ghana and international recording labels, as well as cassettes and CDs. At the Library I met Dr Markus Coester, a German scholar of ethnomusicology and Highlife music who has been working with the archive for 10 years, leading a major ongoing project to document and digitise the recordings and preserve them for future generations.

On my final morning in Accra I visited the Ghana Museums and Monuments Board and met with Assistant Director, Kuntaa Dominic Dekumwine, and Chief Curator of the Museum of Science and Technology, Malik Mahmoud Saako. We spoke about the refurbishment of the National Museum and the re-curation project that is currently underway. I was able to visit the currently-closed National Museum, designed in part by architect Denys Lasdun (who designed the National Theatre in London).

Overall, my week in Accra was enormously interesting and a wonderful opportunity to discuss overarching curatorial objectives for the preservation of ephemeral heritage with colleagues. After connecting with organisations and individuals across the sector, I am looking forward to future discussion and collaboration.