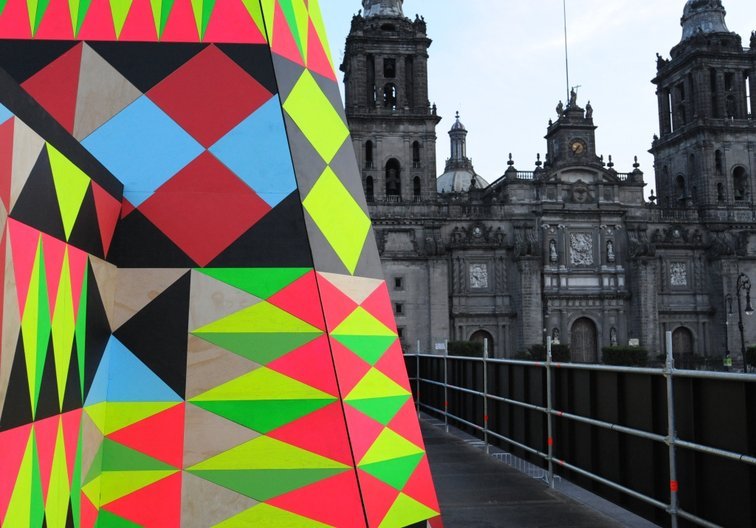 Morag Myerscough has been announced as one of the Royal Designers for Industry 2017 by the RSA, an accolade that celebrates a substantial contribution for rethinking design for positive social, economic and environmental impact and is regarded as the highest honour a UK designer can receive.

In 2015, Abierto Mexicano de Diseño commissioned Morag and Luke Morgan to create Ways of Seeing, a landmark installation in the Zocalo, the heart of Mexico City. The commission was in collaboration with the British Council as part of UKMX through a major partnership resulting from Abierto's participation in the Design Connections programme in 2014.

Morag, along with Alison Brooks and Mike Rawlinson are the leading designers who have been elected to join creatives as diverse as Vivienne Westwood, Brian Eno and iPhone inventor Jonathan Ive as prestigious Royal Designers for Industry. The three will be awarded the prestigious status Royal Designers for Industry at an award ceremony to be held at the RSA on Thursday 30 November 2017.

Only 200 people at any time may hold the title – awarded annually by a panel of design leaders. Prominent post-holders include leading UK innovators Terence Conran, James Dyson and Thomas Heatherwick.

Morag Myerscough RDI, for ‘outstanding expertise in communication design and its transformational application to exhibitions and installations in public spaces’.

"It feels wonderful to be recognised by such an eminent group of people. I look forward to contributing to the RSA’s work in the future and to demonstrating how design can make a positive contribution to wider societal issues.”

For more information on Morag's work, click here. Find out more about the Royal Designers for Industry here.